It’s part of ‘Young4Eva,’ which sees release this fall. 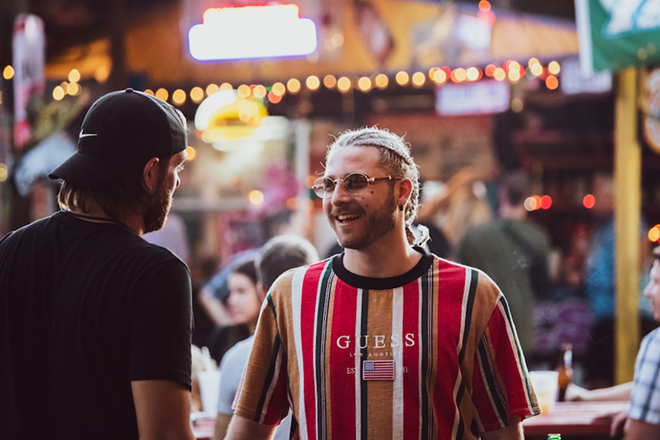 Remember what it was like to party? If not, turn your eyes to a new video from Clearwater rapper Young 40.

The clip for “Poppin’”—filmed and edited by BOTB-winning producer Maxx Forman—was put to tape during Johnny Conforti’s November 2016 stay at a penthouse suite in a Treasure Island hotel, just a 35-minute drive south from the Clearwater neighborhood’s where Conforti grew up one of three boys in a large and active Italian household. The equally active party you see in the nearly four-minute video happened long before coronavirus was even on the radar.

Conforti and friends actually filmed two videos in one night as DJ Wally Rios manned to the ones and twos. The cops circled around the hotel, which actually started requiring a two-night stay in the suite after the chaos Conforti created (bloopers at the beginning of the video show the room’s smoke alarm going off).

The track itself, produced by Henrik3000, is one of 13 on a new release called Young4Eva, which is set for a fall release.

Conforti told Creative Loafing Tampa Bay that the thing he misses most about the days before coronavirus is being able to go places without a facemask. He’s hopeful about being able to play a nightclub before the end of the year and has applied to be a part of Symphonic Distribution’s local music showcase Vibes of the Bay, which normally happens a Crowbar where he says the owner, Tom DeGeorge, “has done so much for the local music scene and myself.”

And if you’re wondering how a video from 2016 is just now seeing the light of day, then you’re probably not aware that Conforti sits on the music in his vault, which currently has 50 songs despite the fact that he hasn’t been in the studio once in 2020. He told CL that the latest batch of music is rolling out now because his marketing research has finally got him to the point where he’s comfortable having the ball in his hand when it comes to the trajectory of his career. He’s identified different targeted audiences which notal nearly 17 million people; since he can’t play clubs at the moment, he’s looking forward to buying targeted ads, collecting data and finding out what works and what doesn’t when it comes to spreading Young 40 music around.

He’s spent the quarantine refining his production so much so that he’s now producing beats before even writing the songs. Conforti told CL he’s written more than a dozen songs during the lockdown, but he’s most proud of a still unheard collaboration with Pittsburgh producer E. Dan. who’s worked with Wiz Khalifa and Mac Miller.

He hopes to visit E. Dan soon once they can figure out the right safety protocols for the studio.

In the meantime, dial the clock back and party a bit with Young 40 below.

Read his 2016 intro letter and disclosures from 2022 and 2021. Ray Roa started freelancing for Creative Loafing Tampa in January 2011 and was hired as music editor in August 2016. He became Editor-In-Chief in August 2019. Past work can be seen at Suburban Apologist, Tampa Bay Times, Consequence of Sound and The...
Scroll to read more Local Music articles