You’re not a real jazz fan if you don’t make it to St. Pete's Palladium Theater this week

Photo via Emma Hedrick Press Kit
Emma Hedrick
Any self-professed jazz fan who does not show up for at least one or two of the concerts that are part of the St. Petersburg Jazz Festival (SPJF )over the next four days has no standing to bitch about the Bay area’s dearth of jazz programming. SPJF is a grass-roots production without marquee names, but that shouldn’t matter. Jazz performance is in part about discovery. So it stands to reason that responsible jazz fans should adopt a similar sense of discovery—and drop $25 (at least once) to witness some very worthwhile jazz in a top-notch venue. (Hell, even if you can't pay, there are free clinics with some of the artists.)

To sum things up: no excuses.
SPJF takes place on five consecutive nights at the Palladium Theater. David Manson, its founder and director, calls the event a “boutique jazz festival,” and says, “We don’t have the budget to bring any big names in, but trust us, we are presenting some incredible talent.”

Manson, a trombonist, composer and professor of music at St. Petersburg College, founded the nonprofit EMIT Series 25 years ago to showcase artists that would not ordinarily find their way onto Bay area stages. SPJF, in its 13th year, falls under the EMIT umbrella. Manson says his budget for the event is $12,000, which he funds through grants and donations, and, for the first time, some money from the National Endowment for the Arts.

Twelve grand is by no means a lot of money when it comes to producing a music festival, but it’s enough for Manson—with his wealth of connections—to mount an estimable and eclectic program that touches on an array of jazz subgenres.

SPJF skipped 2021 due to COVID, and this year is holding shows in the Palladium Theater’s 830-seat Hough Hall. Manson would prefer to use the venue’s 150-capacity Side Door Cafe, with its nightclub-style set-up. The pandemic has put the kibosh on that room—for this year, at least.

All shows are general admission, so there’s plenty of room to spread out. Masks are encouraged but not mandatory. All tickets are $25.

Here’s a rundown of the slate. It should include at least something for any discerning jazz fan. And if you’re merely jazz-curious, SPJF is a terrific opportunity.

This 14-year collaboration between Manson, his wife Andrea—a singer and native of Rio de Janeiro—and an elite ensemble of players digs deep into Brazilian music. “We could play ‘Girl From Ipanema,’ but we’d rather play [Antonio Carlos] Jobim tunes that people haven’t heard,” Manson says. “We play Ivan Lins, Baden Powell, Joao Donato—and two of my originals for this concert.”

Manson calls Ruiz “one of the “Top 10 jazz flute players in the world.” Drummer/percussionist Periera, from Brazil, has toured as a member of Janelle Monáe’s band, and has performed with Bruno Mars and many others.
Thursday, Feb. 24, 7:30 p.m.—Best of Blue Note: James Suggs w/Austin Vickrey Sextet

Blue Note, founded in 1939, is the most important record label in the history of jazz. Its roster has included many of the most influential and popular musicians that the idiom has ever produced. Bay area-based trumpeter Suggs and saxophonist Vickrey will celebrate the label’s most fruitful period, the 1960s (mostly), and the most readily identifiable “Blue Note sound,” modeled after the hard-bop of Art Blakey & the Jazz Messengers.

This is the festival’s most ambitious offering. Led by saxophonist Pete Carney, the 12-piece ensemble interprets the music of Radiohead—as well as that of Beck, Soundgarden, Nirvana and other ‘90s rock titans—through a jazz prism. RADIOJazzHEAD includes a string quartet, horns, a rhythm section and video images. Frederick Johnson, a singer and trombonist from Chicago, acts as the de facto frontman. His ethereal tenor will be supported by backing vocalists. In case anyone is wondering: the music rocks—in a delightfully warped fashion.
Saturday, Feb. 26, 7:30 p.m.—Emma Hedrick with the Helios Jazz Orchestra

Manson founded the 18-piece Helios band about 13 years ago. “It was funny—I call it the ‘accidental big band’,” he says. “I was wanting to do a jazz band evening with retirees and students, and I wound up with a bunch of pro players. We’re pretty diligent. We actually rehearse every two weeks.”

Helios will perform instrumental pieces as well as back vocalist Hedrick, a 21-year-old student at Frost School of Music at University of Miami. “I was struck by the maturity of her voice,” Manson says. “I’m super-picky about vocalists. In fact, I’m terrible about it. I don’t like the ones who adopt a particular affection, who combine different legendary singers into their voice. Emma’s singing sounds very authentic.”

The New York-based vibraphonist/composer—who has worked with Hancock, Shorter and other prominent artists—is coming in from New York and will team up with Miami musicians Carlo DeRosa (bass) and Rodolfo Zuniga (drums).

Dingman’s deeply resonant tone mines the bell-like quality of his instrument. He matches that with a formidable technique and improvisational imagination. His recorded music is by and large calm and ethereal. (For you jazz aficionados, it’s reminiscent of the ECM Records sound.) Manson has a hunch that the ad hoc trio will “spike up the energy” for this gig. 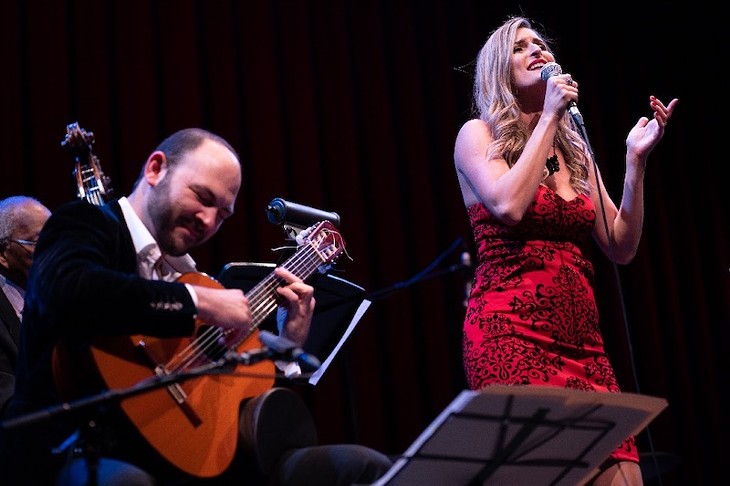 Eric Snider is the dean of Bay area music critics. He started in the early 1980s as one of the founding members of Music magazine, a free bi-monthly. He was the pop music critic for the then-St. Petersburg Times from ‘87-’93. Snider was the music critic, arts editor and senior editor of Weekly Planet/Creative...
More
Scroll to read more Show Previews articles
Join the Creative Loafing Tampa Bay Press Club