A big ass rain cloud is forming in the Gulf of Mexico, and it could bring rain to Tampa Bay 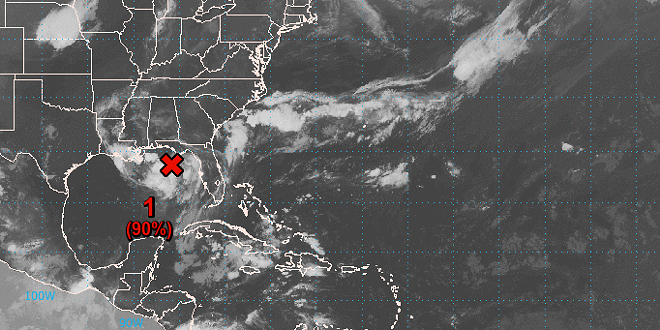 There’s a low pressure area out in the Gulf of Mexico, and most meteorologists believe that a tropical depression — aka a big ass rain cloud — will form. It’s expected to head west (that’s away from Tampa Bay), but not before it dumps a bunch of wet stuff on us.

The National Hurricane Center says that An Air Force Reserve Unit reconnaissance aircraft is scheduled to investigate the disturbance — which was about 100 miles south-southwest of Apalachicola — this afternoon.

The broad low pressure area will be called Barry if it becomes a depression, and it’s producing widespread cloudiness, disorganized showers and thunderstorms according to the NHC.

“Environmental conditions are conducive for development of this system, and a tropical depression is expected to form late today or Thursday while the low moves slowly westward across the northern Gulf of Mexico,” the NHC wrote.

Fox 13 weather guy Dave Osterberg said that the system will throw moisture on shore and produce rain “for the next few days on and off.”

“For us, it’s just rain,” Osterberg said, adding that rain chances in Tampa Bay are between 50% and 70% throughout the week.

Just look out for the Teenage Mutant Ninja Puppies, OK?