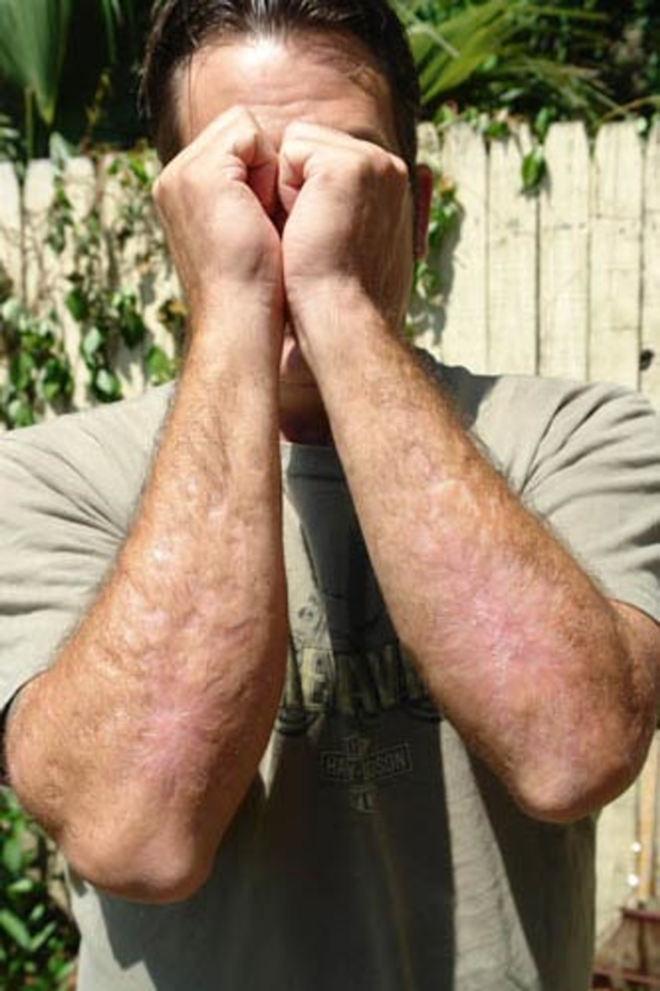 When the boom crane snapped its moorings and fell on Joe* in the wet, muddy Chicago fall of 1988, it was a bad start to a long Thanksgiving weekend. "It took three guys to lift the crane off me," Joe says, "but I was fine. Muddy, sore and cold, but fine. I mean, I thought I was fine." He wasn't. And 15 years, eight surgeries, two screws in his neck, five pins in his spine and another big plate in his neck later, he knew it.

In 2003, the screws in his neck popped out and the drugs he was taking for the pain were no longer working. "One day, you're a citizen, taking your meds as prescribed, doing what you're told, all that," Joe says. "Then the drugs stop working and you know it's illegal to get more, so you start changing the way you take them."

Joe — who had moved to Sarasota a few years after his accident — started crushing up his Roxycodone first. "Once you cross that line," Joe says, "it is unreal how fast shit starts to unravel." From crushed and swallowed, to smoked, to snorted, to melted down and injected. "I don't remember the timeline," Joe says, "but no matter how I took them, I just wasn't getting enough." And the issue went from pain to full-blown addiction.

WITH 100-PERCENT disability checks rolling in on a regular basis, Joe devoted his attention to his "pain management," and he met a lot of doctors. Because of the way the law works in Florida, Joe could get as many prescriptions filled as he wanted, but he could only get one prescription a month from any one doctor. To maintain his growing addiction he needed to find as many doctors to prescribe for him as he could.

"Ninety-five percent of these 'pain management doctors,'" says, lifts his hands and does the quote sign, "are crooked. All these ads you see on the backs of magazines like Creative Loafing, these guys, they don't accept health insurance so they don't have to have malpractice coverage. They only take cash or credit cards. A lot of them, they open up their own pharmacies in their offices. Often they don't open until the evenings when their clients get up and they won't accept patients under 25."

Joe named no specific advertisers, but said that checking the back page of the local alternative weekly is a common practice among users. "Every time I needed another doctor I just went out and picked up a Creative Loafing," Joe says. But there are plenty of other avenues as well: "You have to go by word on the street and local pharmacies," Joe continues, "because by the time there is any info on the Internet the place is usually already closed down or moved. It's a secret society and everyone who doctor-shops talks, so word travels fast about who the good doctors are." Good doctors meaning the ones that will prescribe the most pills in the fewest visits.

"I'd be in a doctor's office," Joe says, "it's 7 o'clock at night in August and the waiting room is full of people in sweatshirts, shivering their way through the first stages of withdrawal," Joe says. "I remember paying $800 for $400 worth of prescriptions right there in the office. Walking out and thinking: 'This shit is really, really fucked up.'"

The Sarasota County Sheriff's Office thinks so, too, which is why in November 2009 they launched their pharmaceutical investigation unit to crack down on prescription fraud and doctor shopping, and to minimize the number of overdoses. This sheriff's unit, combined with new legislation that monitors prescriptions, may have put an end to Joe's spiral, but at the time, there was very little oversight.

"Sometimes, you know, one of the 5 percent legitimate docs would request my prescription history. But, because the pharmacies, none of them are linked, I would walk in with my three-month printout from just one place," Joe says. He lights a cigarette and combination-laughs-and-coughs out a roomful of smoke. "That was the hardest part about the whole thing. Keeping the damn pharmacies straight." He shakes his head and points a finger in my direction. "You walk into the wrong pharmacy at the wrong time and they will call 911."

The "Pill Mill Bill" that Charlie Crist signed into legislation last summer aims to link pharmacies through a common database, tracking each patient to make sure they are buying only the amount of drugs allocated by one doctor for a given period.

The bill will also prohibit pain management doctors from prescribing more than a three-day supply of pills to clients who pay by cash, check or credit card. But for now, there is still nothing to stop addicts from acquiring as many pills as they desire.