Though organized by the Students for a Democratic Society at USF, the protest also drew infiltrators from the fringe, far right group “The Groypers.”

Last night, after mostly peaceful protests that started in Temple Terrace and made their way up Fowler Avenue past the University of South Florida, hundreds gathered near Tampa’s University Mall to protest the killing of George Floyd.

Though originally organized by the Students for a Democratic Society at University of South Florida, Saturday night’s protest also drew infiltrators from the fringe, far right group “The Groypers.”

Meanwhile here in Tampa, it appears some boogalooers got on TV to do a white supremacist chant pic.twitter.com/yPMnktabZ8


The man in the center holding his phone is Nick Fuentes.

Fuentes himself tweeted Burke’s video, and a DLive stream from his own account shows he was at the protest. In the video, Fuentes lurks by the WFTS news van, telling his followers to let him know when they go on the air. "We should go troll this ABC guy in a second," says Fuentes.

According to the Antidefamation League, Groypers are considered a white supremacist group, though Fuentes carefully distances himself from the phrase and states that he prefers “Christian conservatives,” who oppose things like, immigration (undocumented and legal), globalism, gay and transgender rights and feminism. 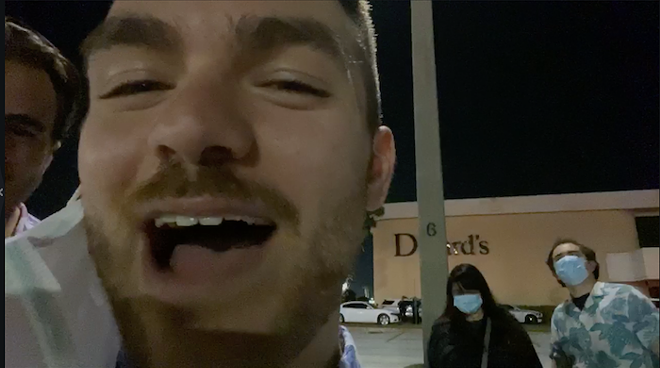 “Like the alt right and other white supremacists, Groypers believe they are working to defend against demographic and cultural changes that are destroying the “true America”—a white, Christian nation,” writes the ADL. “However, Groypers differ in a number of ways from the alt right. They identify themselves as 'American nationalists' who are part of the 'America First' movement.”

During the livestream, protesters seemed skeptical of Fuentes, and asked what he’s doing there, to which he would say he’s “documenting” for TruNews. At another point when a protester asked him if he was down with the cause, he said “We’re supporting the cause! We’re with Soros.”

“I don’t think they like us very much, said Fuentes later in the stream. ”They’re always asking what our motives are, they don’t think were down with George.”

When Fuentes sees an interracial couple, he says "Looks like we have some race mixing."

RELATED: Everything we saw at Tampa's George Floyd protest

While Fuentes’ stream mostly consists of him and his followers strolling around saying racist jokes at the expense of Black protesters, his presence at the gathering is notable.

Fuentes, who was also present at the 2017 “Unite The Right” Charlottesville rally, does tell protesters he’s “down for the cause,” but what cause is certainly up for debate.

More than likely, what Fuentes is referring to here is what far right groups call “The Boogaloo,” which is a play off the ‘80s breakdancing classic “Breakin' 2: Electric Boogaloo,” that has now morphed into internet slang for a second civil war.

Born out of racist memes and pro-gun shitposters in 4Chan forums—and then amplified in massive Facebook groups—the Boogaloo movement is now pushing into the mainstream, and Hawaiian and aloha print shirts have emerged as an ironic symbol for this upcoming “race war.”

As Robert Evens and Jason Wilson pointed out in their lengthy investigation into the Boogaloo movement, the clown face is also a common symbol, referring to the “clown world” meme, which implies chaos and that liberal democracies are “inherently ridiculous and doomed to failure.”

University of St. Thomas Associate Dean Lisa Waldner, who specializes in white supremacy and the anarchist movement, echoed this sentiment, telling WCCO that the goal is to create chaos and push their own separate agendas. “Why would people of color burn down the businesses they often frequent?” asked Walder. “There were people out there with knowledge in how to do this and how to do this quickly.”

Last night’s protests in Tampa, like the previous COVID-19 lockdown protests, gives Fuentes and his followers the opportunity to push for civil unrest and be at the front lines of The Boogaloo, while also appearing to be both pro-police, and pro-Black Lives Matter.

"However irony-drenched it may appear to be, this is a movement actively preparing for armed confrontation with law enforcement, and anyone else who would restrict their expansive understanding of the right to bear arms," said Evans and Wilson. "In a divided, destabilised post-coronavirus landscape, they could well contribute to widespread violence in the streets of American cities."

On a related note, here's a video of Fuentes eating his boogers on live television.