Dave Decker
The controversial "Back the Blue" mural in downtown Tampa.

On the evening of Aug. 1, 2020, around forty “Back the Blue” supporters headed to downtown Tampa to paint a sloppy, illegible, illegal mural that would eventually go viral and be widely mocked around the country.

Days later, some people tried to paint over it, defacing the “mural”, and eventually, BLM protesters decided to paint an unpermitted mural of their own a few blocks away at Curtis Hixon Waterfront Park, which resulted in seven people getting arrested on charges of criminal mischief. One of the protesters has photo evidence of facial bruising sustained while being processed by Hillsborough Sheriffs at Orient Road Jail.

A year later, the “Back the Blue” mural still sits on N Madison Street, directly outside of Tampa Police Department’s (TPD) headquarters. In August of 2020, CL asked TPD if the painters behind the “Back the Blue” mural would be taken into custody under the same Florida statutes that the BLM muralists were arrested under. At the time, TPD’s public information officer Jamel Lanee said, "This is all being investigated."

TPD’s investigation. The mural is illegal, and a hazard.

According to the document, in the days that followed the painting, officers approached and spoke to some of the “Back the Blue” muralists identified through police cameras, news interviews, photos, and posts on social media where muralists identified themselves and others as participating in the illegal painting of the mural.

Multiple suspects the officers made contact with in person and over the phone declined to speak with officers until they had an attorney present.  No one was taken into custody or given a citation and the officers closed their involvement in the investigation.

A question that goes unanswered in the report is how around 40 vandals were able to block off a city street for four hours and paint it without police engaging and citing them, which is standard operating procedure for anyone defacing city property.

The investigation also reveals that Tampa's Police Benevolent Association (PBA) pressured Mayor Castor to hurry up the approval process prior to the painting of the mural.

Attorney Jeffrey Stull, who represents the PBA, sent a letter to Castor indicating that mural organizer Kristin Krutz was, “frustrated because it is taking so long to obtain approval for her project even though City officials, including you, have expressed support. Ms. Krutz advises me that she believes she has complied with all requirements,” Stull wrote. He also pointed to BLM murals being painted in the city as a reason the “Back the Blue” mural should be approved quickly.

But the problem was, Krutz and crew hadn’t complied with all requirements, according to Robin Nigh, Manager of Arts and Cultural Affairs for the City of Tampa.

This week, Nigh told CL that, “The Back the Blue mural is not art; it is a sign.” She added that in the permitting process, the mural design wouldn’t have passed the city’s transportation department, because placing text on a roadway is a hazard.

After TPD’s investigation, per procedure, Florida State Attorney Andrew Warren’s office reviewed the case, and last September the charges against the muralists were dropped.

“TPD’s investigation followed all the steps we would normally see in a situation like this,” Grayson Kamm, Communications Director for the State Attorney’s office, told CL. “Our decision not to prosecute was based on two factors: first, there was insufficient evidence of malicious intent, which the law requires. And second, there was no public safety interest served.”

What happened that night

On Aug. 1, 2020 the pro-police supporters blocked off N Madison Street with their cars and road cones and splashed paint all over it, illegally defacing city property.

They spent about four hours on the project (from 6 p.m.-10 p.m. according to the police report) and painted directly over lane dividers. Although they blocked the road for four hours right next to TPD headquarters, no cops interfered, as they did immediately with the BLM supporters who attempted to paint without a permit in Curtis Hixon Park.

In response to backlash over the mural, painters initially claimed they had a permit, but they in fact did not.

This was during the height of the George Floyd uprising, and while BLM protesters had been constantly arrested and violently engaged by Tampa police during mostly peaceful marches, members of the mostly-white muralist group were allowed to do as they so shoddily pleased. 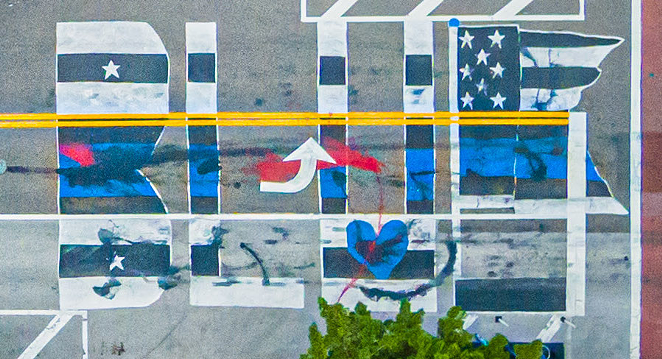 Dave Decker
"Blue" from the Back the Blue mural

To top off the sad absurdity of the event—a man with a criminal past involving sexual assault helped with the painting of the mural.

Mural organizer Krutz told the Tampa Bay Times that she and about 40 volunteers decided to move forward without a permit, "because Black Lives Matter has murals all over the city that say Black Lives Matter, and they were not permitted."

Except, the BLM murals were permitted, and even approved by Mayor Castor who supported the idea of the “Back the Blue” mural, but wished there was a proper process followed.

“Any tribute to honor their [police] service is welcome,” Castor told CL last summer. “It’s unfortunate they didn’t see the permitting process through so that our community could participate in showing their appreciation for the brave men and women that service our residents every day.”

Today, the mural still sits covered in red and black paint from the people who tried to deface it. Taggers who wrote “BLM,” “pigs'' and drew cartoonish pig faces on the mural were arrested, unlike the original muralists. Comedians and social commentators gave the mural other names, such as “Bock the Blub,” “Blrbk the Blub,” and “B𝓵€K̶  ᵀ HE BLU̶₣,” among others.

On Aug. 3 of last year, nearly a year ago this week, Rachel Leishman of the entertainment website The Mary Sue wrote, “So, hopefully someone paints over this eyesore soon and it’s never spoken of again.”

But a year later, as Tampa receives an influx of new residents and investors, people new to Tampa still walk by the abominable mural every week. And yet, the City of Tampa leaves it sitting there in its current dire state.

In a recent email, Tampa artist Cam Parker told CL that literally anything would be better than the current mess.

“A painting of a Powerade bottle, gummy bears, anything really would be better,” Parker—who painted a city-approved mural outside CL office—joked. “But seriously, 2020 was such a dumpster fire. Something sending a positive affirmation toward the people who stood up for BLM, and that better days are ahead, would be really nice to see.”

For now, ‘Bock the Blub’ stubbornly lives on, perhaps a metaphor highlighting the unwillingness of some Tampa city officials to repair obvious, blaring problems. Tampeños and visitors still get to gaze upon the mural in awe, wonder, or—more likely—confusion and disgust.