Major streets relatively far from the site of any related events were closed to vehicular traffic. 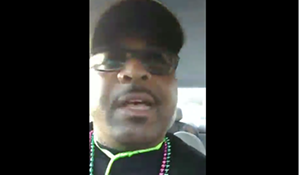 Police shut down some areas to vehicular traffic, including a stretch of 18th Avenue South (more than a dozen blocks south of any events), which caught the eye of activist and community advocate John Muhammad. He streamed video of his attempt to drive home after attending the MLK Dream Big 2018 Family Fun Day Festival at Tropicana Field. Police cars appeared to line the streets, and local businesses — as Muhammad notes, Green's Bakery and ATL Barbershop, among others — may have potentially lost out on customers due to a lack of auto traffic.

Muhammad said he just wanted to know why.

"I don't use the words 'police containment' lightly, but it's starting to kind of look like police containment," he said as he approached his car, which he had parked in a lot near the intersection of 28th Street and 18th Avenue South in order to film the road blockage.

At roughly the four-minute mark, he interacts with a police officer, who told him he couldn't park in the parking lot and had to move his car.

The officer later identified himself as Officer Douglas Weaver. (In 2013, Weaver and Sgt. Karl Lounge were presented with the state's Officer of the Year award for their actions the night of the 2011 killing of two police officers, Sgt. Thomas Baitinger and K9 Officer Jeffrey Yaslowitz.)

While the interaction got a little tense, it didn't escalate. Muhammad wondered aloud how it might have escalated had he not been able to remain calm.

And as he drove a mile and a half out of his way to get home due to roadblocks, he noted how police presence isn't this heavy or aggressive at other major events throughout the city.

"Our city is almost under siege, man. Like, really, you can't move freely in south St. Pete on MLK Day and I'm interested in finding out what reasoning or rationale there is." he said. "What other part of the city do you experience anything like this?"

His video has gotten thousands of views on Facebook, and extensive attention from community members who are concerned that police are systematically targeting predominantly African American neighborhoods, even turning south St. Pete into a virtual police state and denying freedom of assembly on the day honoring a civil rights icon.

"St. Pete, I wholeheartedly understand the importance of safety in our communities. Dr. King stood for peace, justice & unity. However, this is not the type of image that promotes either of those ideals. To me, this looks like soldiers on the front line preparing for battle... We've got to do better folks. Not how I want my city being portrayed!" former city council candidate Corey Givens Jr. wrote in a Facebook post.

St. Petersburg Police Department spokeswoman Sandra Brenzil told CL that the wide range of events that were part of the MLK Dream Big celebration made it "necessary" to close down some streets to auto traffic, including 18th Avenue South, and noted that aside from some people complaining that they were "inconvenienced" by the road closures, there were no issues. There were also no arrests.

“Our goal is to ensure public safety and we did our best and that included having to shut down some streets,” she said. “We feel like we did a good job in keeping the public safe.”

While it is unclear whether police were aware of any possible threats to public safety, gun violence did break out during Miami's 2017 MLK Day celebration, which led to "enhanced" security measures in that city for this year's festivities.

Some roads were also closed for Tampa's MLK celebration events.

Maria Scruggs, head of the St. Pete chapter of the NAACP, said on Facebook she is planning on convening a meeting in early February to address the issue as well.