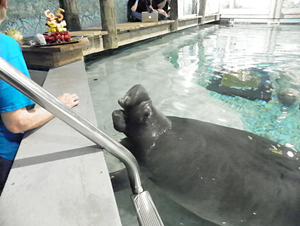 Wikimedia Commons/netweave
A photo of the beloved manatee on his 65th birthday in 2013.

Even before Sarasota Herald-Tribune photos raised questions of whether negligence had led to the death of Snooty, the oldest known manatee in captivity, Denise Anderson of Florida Voices for Animals had suspicions.

"I loved Snooty the manatee and am mourning his needless and tragic death," she wrote in a July 25 email to CL. "I truly believe the South Florida Museum is negligent in NOT considering the 'what ifs' in Snooty's living environment. If they had done this properly then Snooty would NOT have died a needless and terrifying death."

Two days later, the Herald-Tribune wrote that, based on photos taken shortly before Snooty's unexpected death, the explanation of the accident given by South Florida Museum officials may not have been completely accurate.

According to the museum, the hardware securing a panel leading to a small underwater area in Snooty's tank is inspected daily by staffers. But the photos, which were taken during a media event prior to Snooty's 69th birthday celebration, showed that the panel was not securely bolted to the wall.

“Their photos show that same panel hanging by one screw,” Anderson said. “So obviously that panel was not checked daily like they had said.”

Arguing that Snooty would still be alive if staff and officials had done their jobs properly, Anderson and others will protest outside the Bradenton attraction from noon to 1:45 Saturday.

She said she expects a coalition of animal rights groups and activists to attend, including representatives of PETA and Silverback Peace Group.

They'll be calling for the immediate ouster of South Florida Museum Chief Executive Officer Brynne Anne Besio and Chief Operating Officer Jeff Rodgers as well as the staffers responsible for the panel.

“Their job was to keep Snooty safe and they failed to do that,” she said.

Museum officials say they are trying to get to the bottom of what happened and that there's "a thorough review process” currently underway. The investigation, which will include outside experts, aims to collect "all the facts around Snooty’s death." The process was "quickly endorsed" by "leaders of Museum’s Board of Trustees and the CEO" after Snooty's death.

In a written statement dated Aug.1, a spokeswoman for the museum said protesting the museum would essentially be counterproductive.

"The animal rights group that says it plans to protest at the Museum on Saturday is not honoring Snooty or the significance of his life as an ambassador for his species. Snooty touched the lives of our staff, guests and the public for more than 68 years, as well as the lives of 33 rehabilitated manatees at the Museum and countless other manatees positively impacted by the awareness he raised for the species – and for that we are grateful," the statement read.