In the meantime, Florida Republicans are currently on the verge of making Florida an constitutional state. 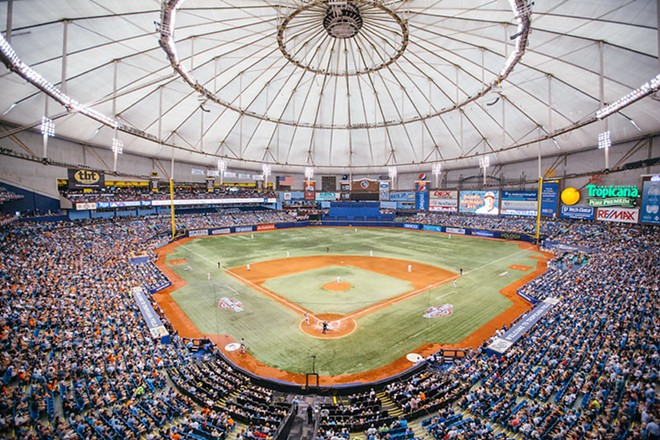 Photo via St. Pete/Flickr
Following years of hefty donations to Florida Republicans, the Tampa Bay Rays
have decided to briefly forget about the gun-loving party they historically support, and instead recognize the nation's recent mass shootings by posting facts about gun violence and a singular donation to a nonprofit that advocates for stricter gun control.

Last night, the St. Petersburg-based MLB team announced via Twitter that the organization has donated $50,000 to Everytown, and also shared gun facts from the nonprofit across the team's social media channels.

"In lieu of game coverage and in collaboration with Yankees, we will use our channel to offer facts about the impact of gun violence," the Tampa Bay Rays said in a tweet. "The devastating events that took place in Uvalde, Buffalo and countless other communities across our nation are tragedies that are intolerable."

Over the last decade, Florida has experienced multiple high-profile mass shootings (including Pulse and Parkland), and in that time period the Tampa Bay Rays have overwhelmingly donated more money to the Florida GOP and conservative political action committees than any other party or cause.

As first pointed out by Florida investigative reporter Jason Garcia, according to Division of Election documents, the Rays have already spent $67,125.00 in the upcoming 2022 election, and so far all of it was to the Florida Republican Party.

If you go back to 2014, when the Rays first started making political donations, the team has donated a total of $309,630 to entities across the political spectrum. Of that total, $182,725 went to conservative politicians or PACs.

Notably, the Republican Party of Florida has received four separate donations from the Rays, totaling $89,145. Comparatively, the Rays have only made one donation to the Democratic Party of Florida, with a $5,480 check from last December.

In that same time period, Democratic candidates and PACs have received a total of $128,280 from the Rays. Former St. Pete mayor Rick Kriseman and current mayor Ken Welch make up the vast majority of this spending, with each mayor's PAC receiving $50,000 donations.

Other larger Democratic donations include $16,400 to the mostly center-left Tampa's Tomorrow PAC in September of last year, and $2,500 to former Attorney General candidate Sean Shaw in 2018.

Image via Florida Department of State Division of Elections

Creative Loafing Tampa Bay reached out to Everytown for comment and it has yet to respond.

Last Friday, the Rays told CL, "we will not be making a comment at this time." Guess we won't know if anything is going to change as far as the Rays donating to a GOP that refuses to stand up to the NRA.

According to the Gun Violence Archive, a nonprofit research group that tracks gun violence using police reports, 8,243 Florida residents have died from gun violence since 2014, and 121 of those were kids.

The Gun Violence Archive defines a mass shooting as "four or more shot and/or killed in a single event [incident], at the same general time and location, not including the shooter." Under this definition, Florida has witnessed 218 mass shootings since 2014.

In the meantime, Florida Republicans are currently on the verge of making Florida a constitutional carry state with Gov. Ron DeSantis pledging to make it happen while he's in office.

"Constitutional carry" would allow Floridians who legally own a firearm to carry it in public, visibly or concealed, at almost any time or place, without training, registration or government licensing.