A timetable is unknown, and councilman Richie Floyd wants tenants to have the option before they’re facing eviction. 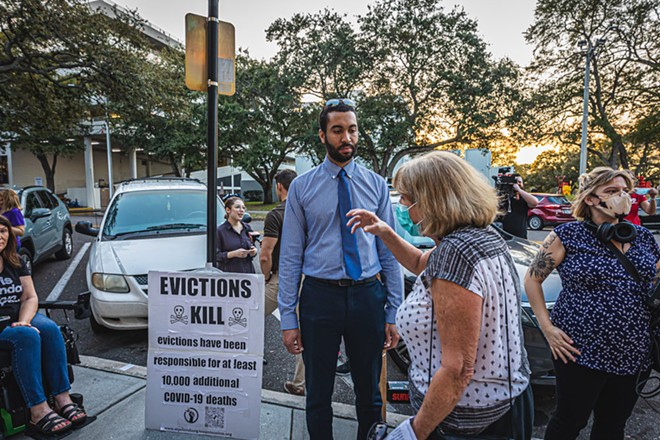 Photo by Dave Decker
St. Petersburg City Councilman Richie Floyd speaks to a protester outside city hall in February 2022.
St. Pete’s Youth and Family Services Committee met Thursday for its first discussion on how the city can create a tenant’s right to counsel.

A guaranteed right to counsel is entirely possible with enough funding and implementation guidance from the city’s administration.

Furthermore, those council members on the committee and even the administration seem open to the idea. How long will it take to implement such a program, however, remains to be seen. The conversation resulted from city council member Richie Floyd's request last month that legal and administration bring back information on how the city can increase legal representation services for tenants, focusing on those facing eviction hearings. Floyd says he also wants to see preventative measures for legal representation in place as well.

“You don't want somebody to get assistance whenever they're struggling to stay in their home,” Floyd said. “You want them to have the legal assistance before that.”

The city currently funds legal aid services, which mostly require 80% AMI income or less, leaving many who don’t qualify without options come eviction time. Gulfcoast Legal Services (GLS) is one of the agencies receiving funding ($98,000) from the city to provide legal services to residents at 80% AMI or below. William Peña Wells, housing attorney with GLS, said there’d been an increase in people seeking their services since COVID-19.

“These are people who didn’t think they’d be in a situation where they’d be behind on their bills and are now facing a life on the street,” Wells said. “So the short answer is, yes. We're seeing an increase in demand for housing assistance.”

“A lawyer in the proceedings will always make a difference more than a tenant alone.”

Those who don’t qualify for services from Gulfcoast or others have to fund their legal representation when faced with an eviction, costing $500-$10,000 depending on the circumstances.

“I'd like to discuss, in my honest opinion, a universal service that anyone regardless of income could use,” Floyd said.

One option discussed by legal and administration is to include information on existing legal services with the eviction notice. Assistant city attorney Bradley Tennant said that doing so requires more research, but “it’s not a no.”

The city administration told the committee that it is considering a dedicated liaison position to serve as a “conduit” between existing legal services and those facing eviction. That liaison could come from the city’s neighborhood affairs department.

“We are looking at shifting resources and creating a dedicated position to track eviction filings in the public records and notify those people of services,” City administrator Rob Gerdes said. “And just to be clear, we are talking about reallocating current resources, not creating a new position.”

Committee chair and council member Deborah Figgs-Sanders noted that she thought the committee would hear more about the city providing legal representation, not just how the city could inform tenants of existing programs.

“A landlord, when they know they’re not going to be the powerhouse in the courtroom,” Figgs-Sanders said, “When they know that who they’re trying to evict also has legal representation, I’m pretty sure a lot of those cases would go away.”

“I think it's important to recognize that the benefits of a right to counsel accrue to the tenants and their families but also to the community and to the city at large,” Pollock told Creative Loafing Tampa Bay. “The cost of evictions is significant.”

Thursday’s discussion was just that, a discussion and a preliminary one. The committee meets again next month, but a further review on the issue might not come until June. But many in the city, faced with a three-day notice to evict, have neither time nor money to wait. And if St. Pete did fund such a program, as WMNF reported this week, the Sunshine City would be the first municipality in Florida to do so. Pollock noted that similar proposals are under review in Miami and Lake Worth but haven’t advanced yet. Such a move by city leadership in St. Pete could impact hundreds, if not thousands, of tenants across the state.

“I don't care how last minute it is,” Pollock said. “A lawyer in the proceedings will always make a difference more than a tenant alone.”