After labeling it an ‘ambush,’ Tampa Police struggle to deal with weekly block party in V.M. Ybor neighborhood

"This would not happen in South Tampa.” 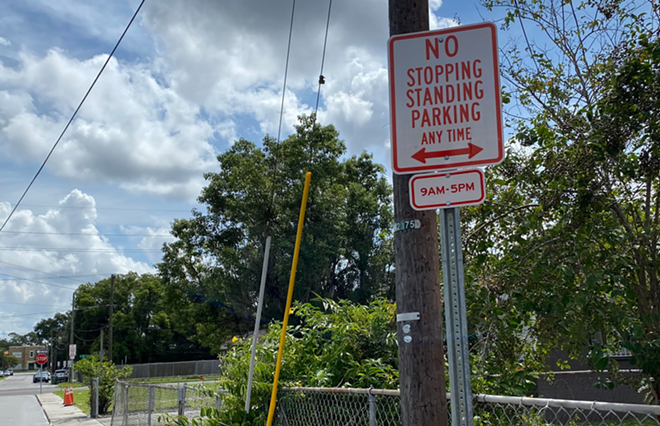 Photo via V.M. Ybor resident
One of the signs that has since been removed.

In response to an alleged “ambush” against Tampa Police officers last June in the V.M. Ybor neighborhood, TPD recently requested a series of street signs which would restrict parking in the area where the incident initially took place.

The signs, which were put up Sept. 3 and quickly removed this morning after Creative Loafing Tampa Bay asked for more information from the City of Tampa, initially said “No stopping, standing, parking, at anytime, 9 a.m.-5 p.m,” and were placed along 26th Ave and 15th St., as well as 27th Ave to 16th St."

As CL previously reported, residents of the neighborhood have filed complaints to Tampa Police about gatherings, which allegedly attract hundreds of people on a near weekly basis, as far back as January 10.

However, despite having the foresight to send nine officers to one of the gatherings on June 20, at the intersection of N. 15th Street and E. 26th Avenue, Police Chief Brian Dugan labeled the incident as an “ambush,” claiming on Fox & Friends that “it was clearly a setup,” and there was no way for his officers to know if this was a block party or a protest.

Dugan also said a bottle was thrown at an officer, though zero body cam or dash cam footage has been released from the incident.

“It was no ambush, it was months of neglect,” said a resident to CL back in June, who wished to remain anonymous out of fear of retaliation from TPD. “Plus, nobody is ambushing anyone, it’s just people getting drunk at a party.”

The resident added that there's a general feeling of neglect by the police in this neighborhood.

According to another resident of V.M. Ybor, who also wished to remain anonymous out of fear of retaliation, the department wouldn’t respond to the parties over the last nine months because it was “afraid of rioting,” and also that there’s nothing they can do about it because the gatherings are on private property.

Member of the V.M. Ybor Facebook group have also regularly complained about the weekly gatherings. “I called seven times last night. And I’m much further away from you,” wrote one resident in a comment. “I asked the officers to come by my house so I could talk to them and they could hear the noise level. Three different officers stopped by. Then drove done [sic] and apparently didn’t do anything.”

On Wednesday, TPD spokesperson Jamel Lanee told CL that the recent signs were indeed in response to the June “ambush” incident, and that they were put there after a survey was requested with local residents. She also pointed out that so far no one’s been ticketed, and that the signs were supposed to say "9 p.m.-5 a.m," not "9 a.m.-5 p.m."

“Cars were parked along the roadway and blocking people’s driveways. If an ambulance or fire truck needed to get through, it would have been impossible,” said Lanee in an email. “The goal was to help the residents that live there when it came to people parking after hours and hanging out on the street overnight.”

However, residents say they were not informed of the new signs, and argue that one of the main issues is that many homes in the V.M. Ybor and Ybor Heights neighborhoods don’t have driveways—so residents are forced to park their cars on the street overnight.

According to City of Tampa Communications Director Ashley Bauman, Lanee was incorrect when claiming there was a survey, saying there was actually an “assessment to the area,” and the signs came about after TPD spoke with Tampa's Mobility Department for a solution.

“The signs were removed this morning,” Bauman told CL, who also said TPD is now going to go back and chat with the neighboring property owners and businesses to go cover a parking parking permitting process that would work for everyone.

Meanwhile, residents say restricting parking isn’t the problem and only adds unnecessary burdens on their community. “We would have to come together and agree upon the funding, how to do it and implement it,” said one resident. “Then we have to buy the permit. So that's another stressor.”

“Instead of focusing on parking,” they added, “why not ticket them for a noise violation? Or unlawful assembly for having over 20 people? We’re still in a pandemic. This would not happen in South Tampa.”