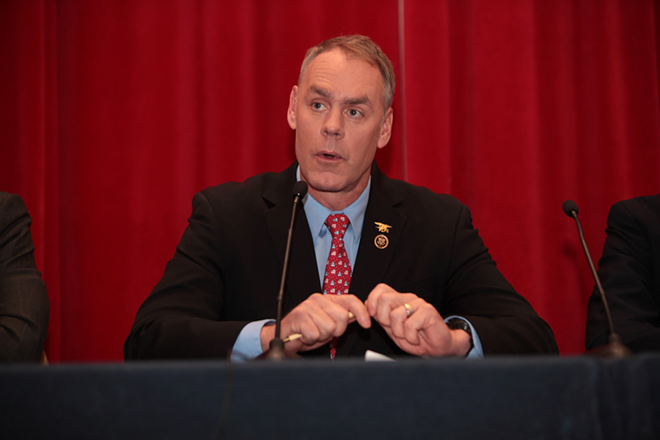 On Wednesday, the U.S. Senate confirmed Trump nominee Ryan Zinke, a Republican Congressman from Whitefish, Montana, for U.S. Secretary of the Interior. Unlike other votes confirming cabinet members, he was confirmed with a comfortable margin in his favor: 68-31. More than 15 Democratic senators, including 2016 vice presidential nominee Tim Kaine, a U.S. Senator from Virginia, voted in his favor.

As interior secretary, Zinke will have to deal with a range of issues, from endangered species protection to oil and gas exploration and extraction. And despite his claims of being a "Teddy Roosevelt Republican" and his acknowledgement that climate change is indeed occurring and it is human-caused, environmental groups are skeptical.

"Zinke is really bad, but given the horrific standard that Trump has established so far, he's actually a little better than the rest of them," Kierán Suckling, executive director of the Center for Biological Diversity, told Politico back when the nomination was announced.

Suckling and others are concerned about past votes of his that could imperil public lands as well as protected species and do nothing to move the nation toward more widespread use of renewable energy over harmful fossil fuels derived from oil drilling and fracking.

Jamie Rappaport Clark, Defenders of Wildlife President and CEO, said in an emailed statement that while Zinke's voting record on environmental issues like public lands and wildlife as a member of Congress has been somewhat "troubling," he has hope that Zinke will guide DOI to continue its work on environmental protection.

“Defenders of Wildlife will seek to work closely with Secretary Zinke and his leadership team to meet the challenges facing our nation’s public lands and wildlife, outlined in the Wildlife Conservation Agenda we presented to the Trump administration following the election.  We will hold him accountable if he fails to provide sound leadership for the nation’s public lands and wildlife,” said Rappaport Clark, whose organization gave him an 11 percent grade on environmental conservation.

While a chorus of environmental advocacy groups has expressed worry over how Zinke would manage the department, here in Florida, at least one pro-environmental conservation group is optimistic.

"We congratulate Ryan Zinke on his Senate confirmation as Secretary of the Department of Interior. As an outdoorsman with a commitment to protecting America’s treasured public lands and improving park infrastructure, we are confident that his leadership will be critical to protecting the iconic national parks and refuges in the Everglades ecosystem. We are looking forward to working closely to restore America’s Everglades,” Eric Eikenberg, CEO of The Everglades Foundation (a nonprofit founded in 1993 that aims to restore the Florida Everglades), said in an emailed statement.

Among the Democratic Senators to vote in his favor was U.S. Senator from Florida Bill Nelson, though Senate Democratic Leader Chuck Schumer said he was concerned about Zinke's confirmation, according to ABC News, cautioning, "You can't be a Roosevelt conservationist if you sell off public lands."