The 11th U.S. Circuit Court of Appeals said in a notice Wednesday that a hearing will be held the week of May 1. 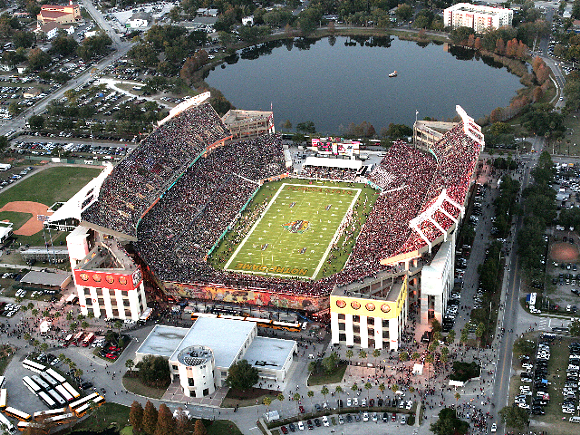 Photo via Camping World Stadium website
A federal appeals court will hear arguments in May in a long-running dispute about whether a Tampa Christian school should have been allowed to offer a prayer over a stadium loudspeaker before a 2015 high-school football championship game.

The 11th U.S. Circuit Court of Appeals said in a notice Wednesday that a hearing will be held the week of May 1 in Montgomery, Ala.

The notice did not give an exact date. Cambridge Christian School went to the Atlanta-based appeals court last year after U.S. District Judge Charlene Edwards Honeywell backed a decision by the Florida High School Athletic Association to prevent a prayer over the loudspeaker.

Honeywell ruled that the association is a “state actor” and did not violate First Amendment rights in denying the prayer.

But attorneys for Cambridge Christian contend that the association violated speech rights. “FHSAA (the association) claims that all speech over the loudspeaker is government speech,” attorneys for the school wrote in a brief filed at the appeals court.

“Yet the record shows that FHSAA permits schools and other private actors to deliver a variety of messages over the loudspeaker: welcoming remarks, promotions, music, and even prayers (at all games except the championship).

Moreover, FHSAA uses the loudspeaker to call for moments of silence, deliver ethical messages, promote sportsmanship, and honor persons and events. But it will not allow these same themes to be expressed under a religious banner.”