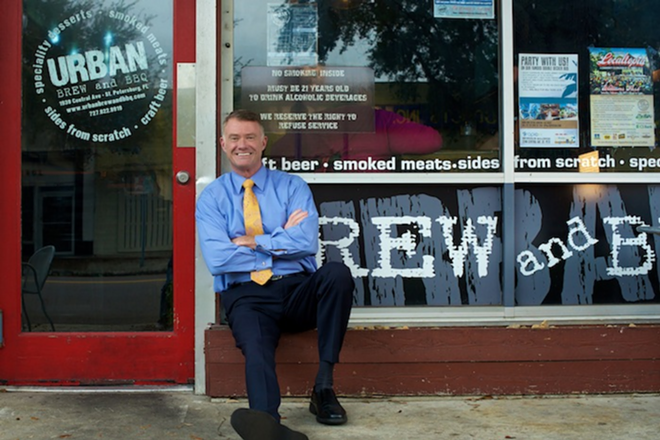 
As the Real Time Traffic & Transportation Reporter and fill-in News Anchor for Bay News 9, Chuck Henson, 52, is a very familiar face for anyone who has cable in Tampa Bay — especially anyone who watches TV in the morning.

He landed in traffic reporting almost by happenstance. Looking for work as a radio DJ after collge (the University of Kentucky School of Journalism), he got a call from a CBS AM station in Chicago inviting him to interview for a job as an airborne traffic reporter. He’d never flown before, never reported traffic before, but they saw his potential, and soon he was up in the air.

"It was insanely scary. I was literally in this airplane with a map book open — because there’s no GPS — with a flashlight in my hand and my finger on the map trying to figure out where we are and where we’re going.” Success in that job led him up the ladder to management positions with media behemoth Westwood One in Chicago, Orlando and Tampa, where he moved a few days before Hurricane Charlie hit in 2004 and thought, “Omigod, what the hell did I get myself into?”

That’s what he was asking himself after a while at Westwood One, too, and he left to become executive director of the Tampa International Gay & Lesbian Film Festival. When Bay News 9 came calling a few years later with an opportunity to jump back into traffic, so to speak, he wanted to make sure that his being gay wasn’t going to be a problem. (It wasn’t.)

For his work at TIGLFF and his visibility as an openly gay TV reporter, he’s been lauded by the LGBT community, winning awards from Watermark readers and serving as Grand Marshal of the AIDS Walk in 2011. He’s also a big name in another realm: the world of marching bands. An alum of Wisconsin’s nationally renowned Madison Drum and Bugle Corps (he marched with them in the 2014 Macy’s Thanksgiving Day Parade), he has been the public service announcer for Bands of America competitions for 25 years, and when he was in Chicago he founded the Righteously Outrageous Twirling Corps (ROTC), which now has chapters all over the country. After time in Tampa Bay’s ROTC troupe, he founded the smaller St. Petersburg Twirling Project in 2007.

Chuck lives with his 6-year-old Scottish terrier, Tucker, in the new Modera Prime 235 apartment complex in Downtown St. Pete. His job entails daunting hours (he wakes up at 3 a.m. every day and goes to bed by 7:30 p.m.); a monotone wardrobe (eight suits, all in dark colors); and particular occupational challenges (“I can’t in my job be tired or sleepy”). He hardly ever takes sick days, but the day we spoke he had a cold: “This morning I almost hocked a loogie on the air.” But he has a home remedy, albeit not the most pleasant-sounding one: “If I think I’m getting sick, I’ll gargle with peroxide. It sounds harsh but it will kill whatever’s in there.”

His favorite restaurants for special occasions? “MISE EN PLACE is so tremendous. The menu changes all the time, and I love the atmosphere and the special attention being paid. And the other one is ARMANI’S. The level of service is — wow! The food is great and you can’t beat the views.”

Why he loves MODERA PRIME: “The staff is exceptionally attentive, the common areas are awesome, the amenities are insane. And you can walk to LOCALE MARKET and Beach Drive and all of the things that are there. (My 401K is going to be spent in Locale Market.) And because everyone’s a new resident, no one is the old curmudgeon in 3A who has been there for 20 years and hates everybody.”

Why he loves downtown St. Pete: “I tell people St. Pete is a micro-urban atmosphere. It is a big city wrapped in a small town. We have a skyline, we have cool buildings, but what I love is that the majority of high-rises are residential and that people actualy live, work and play in that space. It is a city that is alive, that is friendly. I grew up in Kentucky about 20 miles south of Cincinnati, Ohio, very suburban. But the vibe I got immediately in St. Petersburg was warm and friendly like a home town. People say hello, they want to meet your dog. People know my dog’s name. They may not know me, but they do know Tucker.”

Where he gets his suits: DILLARD’S in International Plaza. “Paul Segundo is the guy I work with there. The guys that work there are like waiters at a seasoned restaurant — they’ve been doing men’s fashion their entire life.”

Where he takes care of the rest of his look: BILLY’S BARBER SHOP. “It’s a classic barber shop in the best sense of the word — it’s a ‘NORM!’ sort of situation when you walk in the door. Billy Hume does Cuts for Cops, raising money for the Fallen Officers Fund and at Christmastime he does Bikes for Kids.”

Where he works out: GOLD’S GYM at 38th Ave. N. off of 4th St. “It’s a family kind of gym. The owner, Bob Buchanan, is a former prison warden at Joliet. You do not mess with Bob.”

Who keeps him healthy: DR. MICHAEL JOHN GROSS, with Baycare through St. Anthony’s. “I started with him because he’s a sports medicine guy and I blew out my shoulder this past year in a twirling accident — so I needed a doctor that specialized in sports injuries.”

You’re a runner. Where do you like to run? “I don’t like to run, but I do run. I start at my home and go through the Old Northeast up Beach Drive all the way to Coffeepot Boulevard and back along the water. It’s a classic St. Petersburg run.”

As a traffic guy, you must know some good shortcuts when you’re driving. Tell us some. “I try to do that every day on the air. if there’s something clogged up I’ll always try to give an alternate route. Like for example — 1st Street North [in St. Pete] is a great way to avoid the calamity on 4th Street. It’s residential and it’s quiet. 1st Avenue North and 1st Avenue South are killer for going east and west. If those lights are timed you’re just gone and it’s wonderful.”

Where should no one ever drive at what time ever ever? “Mid-Pinellas County anytime. Honestly, it’s a disaster — everything from essentially Ulmerton Road up into Clearwater up to Gulf-to-Bay is a nightmare, and it’s never going to get better until we have viable transit…”

Where he takes care of Tucker: DR. MIKE MOSSLER at Bayshore Animal Hospital in Bradenton. “He is Grizzly Adams, no kidding. When you’re in the waiting room there will be two cats, three dogs, a turtle, a falcon, someone wil have hit an alligator and boxed it up and brought it in.”

Where he won’t go: “I don’t go to chain restaurants, national anythings, if I can help it. I like to support local businesses.”

Indie businesses he loves: “JUXTAPOSE at Sundial — everything from cheap to super expensive. THE AVENUE — Stephen Shroot, who owns that place, is a 10 in the way he interacts with customers. URBAN BREW AND BBQ — “They just did something brand new called Holy Smoke — cornbread waffle with smoked beef on it, barbecue sauce, a fried egg and cheddar sauce. Dude, it is so good.”

How he fell in love with craft beer: “I never considered myself a beer guy ever until I started going to Urban. Now I have jumped on the craft beer bandwagon, with GREEN BENCH and 3 DAUGHTERS and ST. PETE BREWING and CYCLE BREWING and what Andy [Salyards] is doing at Urban. It’s great!”

Does the Bay News 9 staff have any local favorites? “We get a lot of baked goods from FRIDA’S in Largo. She does cronut — oh, they’re so good. There really isn’t a Bay News hangout. Because we’re 24-hour news, we’re not really together all at once. And the morning show — sadly, we’re all in bed at 7:30 [p.m.] so we don’t get a chance to hang out very much.”

The most important meal of the day: “I love me some MUNCH’S — it is the greasy spoon diner of all fabulous greasy spoon diners. And honestly the cheese grits at CASSIS are [whispers] insane. And I love THE DOME on Central. They used to have my picture up by the front door, and the owner told me, ‘I took your picture down. I would have to start charging you rent if I left it up.’”

What’s the best marching band around here? “The program at Tarpon Springs High School is the best in the country — the 2014 Bands of America Grand National Champion. Band director Kevin Ford is the pied piper of children.”

What about gay bars? “If my friends are going out we will certainly go to GEORGIE’S [Alibi] or ENIGMA. But in my life I don’t find the need to go to a gay bar to enjoy the company of my gay and lesbian friends — we can go anywhere. And I thank god that our city and the people that support it have created that culture for everyone.”