Bad apple: Grāpples® are for anyone who hates grapes, apples and produce in general 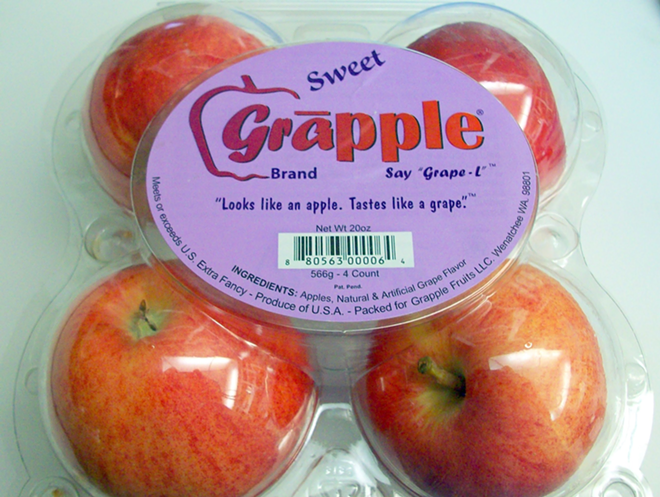 I always stop to gander at the oddity section of the produce aisle in the local supermarket. Although I am vehemently opposed to “science food” and natural items that have been muddled past the breaking point by bored farmers and marketing geniuses, I’m also keenly aware of how boring my grocery cart is. Broccoli, cauliflower, lettuce, blah, blah, blah. If I can’t have the flying car I was promised, maybe I can find solace in the occasional genetically modified super-food.

This week, alongside the usual broccoflower, chayote and tomatillo — all of which aren’t weird so much as merely uncommon — I found a tidy plastic package containing Grapples®. Perfect! Apparently, it’s an apple that tastes like a grape, for all those fine folks out there who love the crisp texture of Eve’s fruit but hate the fresh, sweet flavor. Or maybe some folk are turned off by popping tiny green gonads into their mouths. Whatever. I had to have it.

My first disappointment came when I examined the package after getting it home — it had an ingredients list. Sigh. Sure, injecting something with the flavor of something else is science of a sort, but it isn’t the kind of God-like meddling in the fundamental building blocks of food that fascinates and horrifies me. Turns out these are just plain apples, soaked and squirted with both natural and artificial flavors.

And the artificial reigns supreme here, which I could tell the instant I opened the package and the room filled with the vaguely floral scent of grape-flavored Jolly Ranchers. I took a bite and immediately looked for the trash can. These aren’t just plain apples, these are apples raised by a farming genius to be as flavorless as possible, reducing competition for the horrendous chemical graposity. It tasted like you tacked a cartoon grape scratch-and-sniff onto a crisp and moist piece of Styrofoam.

The Grapple® website claims that “With childhood obesity increasing at alarming rates, Grapple® brand apples could go a long way to improving the eating habits of children.” Sure they could, if you want to encourage fasting and a lifelong abhorrence of the calories in produce in your young ‘uns. Or maybe you’ve raised your child on a strict diet of packaged foods and cut-rate candy from the Dollar Store. If so, Grapples® might be just the thing to ease them into nourishing foods.

Then you can shatter their artificially-lowered expectations with a real apple and a few seedless grapes.