It was the first of the post-primary debates...and, despite there not being all that much more to say, it definitely won't be the last. 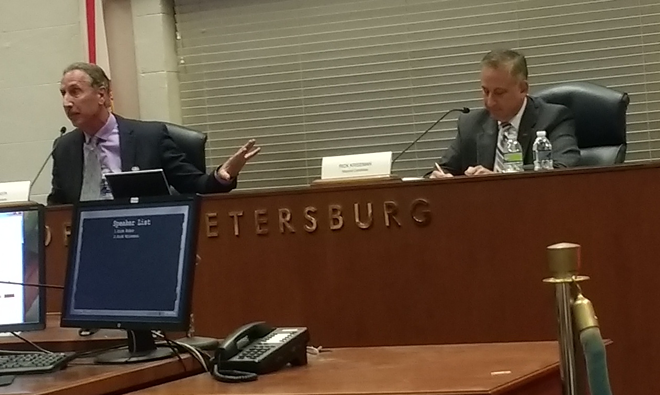 Mayor Rick Kriseman and former Mayor Rick Baker met for the first time since the August primary and, in a departure from Monday night’s city council candidate forum, the two candidates wasted no time criticizing each other’s record on everything from crime to the Tampa Bay Rays and redevelopment of Tropicana Field.

And, of course, sewage.

In response to the first question about the pier, Baker blasted the voting process.

“At the end of the day, you picked a pier that most of the community does not like what it looks like,” he said.

Baker specifically attacked the “concrete structures” in the pier design on park land.

“I would strip those buildings out of that part of the pier,” he said.

Baker also attacked Kriseman’s decision to close the Albert Whitted sewage plant again, while Kriseman pointed to the lack of investment in the city’s infrastructure going back years to Baker’s time as mayor from 2001-2010.

“The reason we are in the position we are in is there have been 20 years of neglect,” he said.

The two Ricks also voiced support for the Rays to stay in St. Pete and redevelop the Trop into something all neighborhoods could enjoy. But Baker took shots at Kriseman’s deal to allow the team to look outside the city for a stadium site while pushing his vision of the redeveloped Trop, including making a third of the site a park with a lake, “like Mirror Lake or Round Lake.”

(Presumably, without the requisite homeless denizens.)

Kriseman, in his wonky way, responded that the city’s master plan includes many of the same features.

Continuing on his strategy to court Midtown voters, Baker kept the pressure on Kriseman’s unpopular decision to put a Floribbean restaurant in the historic Manhattan Casino and a BMW motorcycle dealership nearby. Audience murmurs followed.

From the outset, Baker seemed hungry to push Kriseman with a few zingers while the current mayor focused on numbers. But Kriseman, while trying not attack his challenger outright, offered up some subtle digs at the former mayor.

When a question about helping veterans turned to homelessness came up, Kriseman jumped on the issue.

“We don’t think anyone who has given the effort to serve our country should be homeless,” Kriseman said.

Baker brought up his support of Pinellas Hope and added, “You can’t just keep pushing the homeless from one part of the city to the other.”

The comment did not go unnoticed in the audience, considering the infamous tent slashing episode that happened under Baker’s watch in 2007.

Kriseman retorted, “It’s also important to be compassionate to the homeless and treat them with respect.”

Baker also, once again, did not commit to keeping St. Petersburg Police Chief Anthony Holloway. Kriseman has repeatedly praised the top cop for bringing down the city’s crime rate and criticized Baker for cuts in police officers during a crime wave in his tenure.

“Mayor Kriseman is going to continue to talk about the cuts I made,” Baker countered. “He still can’t balance the budget. He’s going in our reserves even though we have more money than ever before.”

“Kriseman must be able to read the future, because he dipped into the reserves before Irma even hit,” Baker said to a loud applause from one side of the council chambers, evenly split between surrogates of both candidates.

Similar guffaws erupted when Baker signaled his support of the gay community: “I’ve always worked with the LGBT community and I will continue to.”

Baker — Whom Kriseman supporters try to associate with Trump and other climate change deniers — also said he believed in “climate science.” Kriseman, who joined Tampa Mayor Bob Buckhorn over the summer to pledge adherence to the Paris climate agreement, also answered affirmative.

“Climate change and sea level rise is really one of the greatest threats St. Pete faces,” the mayor said. “It’s difficult to address and deal with climate change if you don’t believe in the effects of climate change.”

Baker countered: “I think you have to do more than hire people and hold press conferences.”

Then the former mayor went right back to sewage controversy.

Baker is attempting a re-branding of sorts after his narrow loss to Kriseman in the primary. Last week, the former mayor unveiled a newly designed website showcasing his vision for the city – dubbed the “Baker Blueprint.” On Tuesday, Baker released a new campaign video that seemed to court the younger, hipster vote – a demographic that overwhelmingly favors Kriseman.

On issues like climate change and LGBTQ rights, Baker has recently took positions similar to Kriseman, despite the former mayor’s past contempt of the gay community and vague comments regarding humans' role in climate change. He even brought up his love of dog parks – twice. (It is unclear whether Baker has a dog. Kriseman fosters guide dogs-in-training.)

Notably absent from the forum was any mention of partisan politics.

Baker, a Republican, refuses to answer if he voted for Donald Trump. Kriseman, a vocal Democrat, received an endorsement from former President Barack Obama right before the August primary.

With both candidates’ coffers still filled with hundreds of thousands of dollars in campaign contributions – so far this is the most expensive mayoral race in city history -- that silence will not last. Check your mail box and recycle accordingly.