This isn't the first time a banner has been flown over Mar-a-Lago to dunk on the former president. 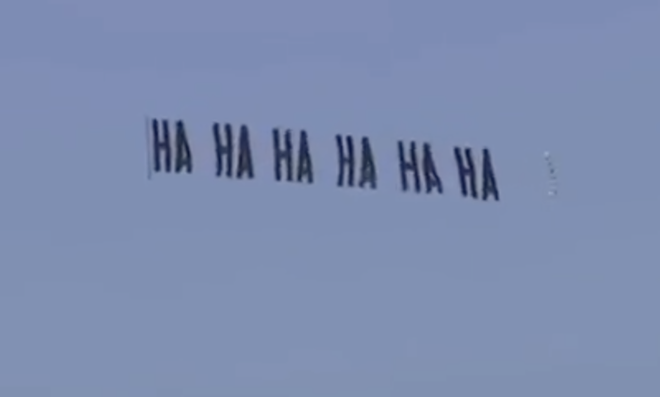 Screengrab via Thomas Kennedy/Twitter
A flag-waving crowd of Donald Trump supporters have congregated at the former president's Mar-a-Lago estate in Palm Beach, Florida.  The MAGA caravan formed just days after a Trump-nominated FBI director allowed agents to search for missing classified documents at Trump's property, and also after recently surfaced photos suggest the president used a toilet as a presidential library.

In an effort to remind Trump supporters that this is all extremely funny, a plane flew around the "Winter White House" Wednesday afternoon towing a large "HA HA HA HA HA HA" banner.

Here is video of our banner saying HAHAHA flying over Mar-a-Lago today. This is how you treat wannabe authoritarians like Trump. You ridicule and mock them. pic.twitter.com/gFqndjMSUv

"Supporters of the man whose campaign was based in no small part on the promise to lock up his chief political rival are now screaming and howling that the FBI has taken materials from the home of former President Donald J. Trump," said Democratic activist Thomas Kennedy in a statement.  "Trump supporters have never been a group to understand the [finer] points of hypocrisy or irony, so the skywriting is an attempt to break through with a communication strategy sure to get some attention."

Florida Democrats roast DeSantis over Mar-a-Lago raid comments: “He (DeSantis) won't condemn January 6. But he has no problem attacking the FBI.”

Thomas also told NBC 6 that he paid $1,800 for the banner to fly around the property for about three hours, and that he would do it again.

This isn't the first time a banner has been flown over Mar-a-Lago to dunk on the former president.  In January of 2021, a plane flew over the estate towing banners that read "Trump Worst President Ever," and "Trump you pathetic loser go back to Moscow."