The board meets again today, and council discusses on Thursday, Feb. 25. 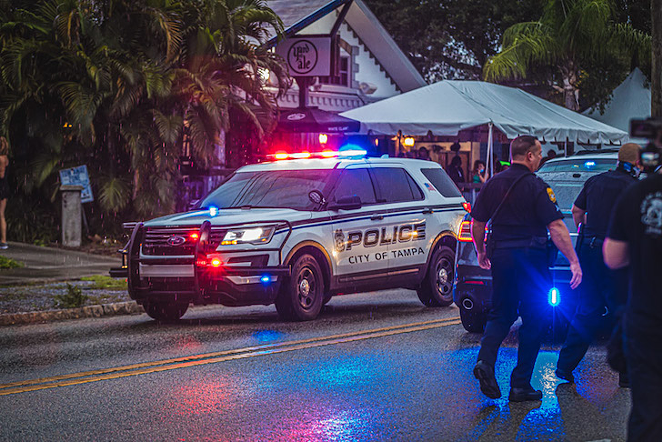 After more than five years of advocating for a Citizens Review Board with teeth, criminal justice reform advocates with Tampa for Justice, the NAACP, and the Greater Tampa Chapter of the ACLU are still calling on the city council to strengthen the demands of a draft CRB ordinance in order to enhance community trust in local police oversight and override the impassioned opposition to change coming from Tampa’s police union and its allies.

On Monday, the local American Civil Liberties Union (ACLU) chapter emailed proposed changes to the ordinance—crafted by the city’s legal team, and up for discussion by the city council this Thursday—to all city councilmembers in an effort to ensure the integrity and efficiency of the reform process.

The city’s Citizen Review Board is set to meet tonight, Feb. 23, at Old City Hall. This will be followed by a Thursday, Feb. 25 discussion on the final draft of the ordinance presented to the City Council by the City Attorney’s Office.

“The time has come for Tampa to update its Civilian Review Board (CRB) from its current designed-to-fail incarnation to one that can be an asset to the community and help to repair distrust between the community and law enforcement,” the memo reads.

Pointing to existing civilian review boards in other Florida municipalities—such as Miami-Dade County, Daytona Beach, and Gainesville—the ACLU and other reform allies, such as Tampa For Justice and the NAACP, offer support for the changes to existing language within the contentious CRB ordinance.

Namely, these changes concern requests for:

All of these proposed changes, the local ACLU chapter notes, are implemented in other local municipalities. For instance, Tampa’s Citizen Review Board—initially created in 2015 by former Mayor Bob Buckhorn—is unique in that it allows the mayor to appoint the majority of the positions on the board—five out of 11 members.

“This is [sic] destroys the independent character of the CRB and is a marked departure from appointment procedures in other Florida municipalities,” the ACLU states, referring to civilian review boards in places such as Daytona Beach, for instance, which grants all seven appointments to the city commission, and in Miami, where the mayor appoints only two of 13 positions to their board.

Despite supporting moderate reforms to local policing, Tampa’s current mayor Jane Castor is herself a former police chief who headed the Tampa Police Department from 2009-2015, and has been criticized for her role in the department’s targeting of Black men for “Biking while Black” in Tampa—a scandal that was one of the leading drivers behind the creation of the CRB in the first place.

This memo from the ACLU comes one week after the publication of a guest column in the Tampa Bay Times penned by Tampa Police Benevolent Association (PBA) spokesperson Dana Portman, who argued that the city must keep politics out of policing and oppose what she characterizes as “radical changes” to the CRB ordinance.

Says Portman, “...these proposals will actually do very little to improve the public’s trust and increase accountability and, instead, they will create a highly charged political bureaucracy aimed solely at second-guessing and undermining the credibility of the men and women in blue, who put their lives on the line every day to protect our communities.”

The Times published a rebuttal from Greater Tampa Chapter of the ACLU of Florida legal panel member Julius Adams on Tuesday.

In it, Adams lays out a case for why, "Everyone — police and residents of Tampa — benefits from a review board that has earned the respect of the community, and can be a real voice for the community."

Reform advocates with the ACLU and Tampa for Justice adamantly reject Portman's framing. “Contrary to suggestions by the PBA that repairing the deficiencies in the current ordinance is part of a “radical” agenda that would wound morale and lead to mass-resignations, we trust that City Council has the wisdom to appreciate that no such thing has occurred in Miami-Dade County, Daytona Beach, Gainesville, or Broward County, nor will any such thing happen in Tampa.”

Still, reform advocates and the PBA have been butting heads on the drafting of this ordinance since July of last year, when—following public outcry on excessive use of force by police and motions by the City Council—Tampa’s Chief of Police Brian Dugan and the City Attorney’s office presented to the council a list of proposed amendments to the Citizens Review Board, which currently reviews completed disciplinary cases and other issues of interest concerning the police department and alleged police misconduct.

This move by the city came one month after Chief Dugan, a controversial figure, flippantly remarked that “it was sad that George Floyd had to get murdered before anyone would come to these meetings.”

This comment was made in reference to a lively crowd of community members who came out to the Citizens Review Board meeting in June to support reforms to the board and to demand transparency in local policing—spurred in large part by the behavior of police at local Black Lives Matter marches, where protestors joined a global movement of people calling for justice following the murders of Black individuals such as George Floyd, Breonna Taylor, and Ahmaud Arbery by police.

Since July, the proposed amendments from Dugan and the city have been heavily revised based on feedback from the ACLU, comments from Councilman John Dingfelder, and the Tampa PBA.

The draft ordinance for CRB reforms was slated for a vote by the city council on Nov. 19, 2020 during a scheduled regular meeting.

In the days leading up to the discussion, the local police union rallied their members and community allies over social media, with a call-to-action to protest the “radical” reforms proposed by the local coalition of reform advocates. Several attorneys with the local ACLU chapter and allies similarly showed up to advocate in favor of reforms, by phone and in-person, clashing with the police union.

In a last-minute change, however, the city decided to pull the draft ordinance proposal from the Nov. 19 agenda, postponing the discussion to February 2021.

The Tampa police union and its allies contend that reformers’ proposed changes to the Citizens Review Board would undermine the credibility of Tampa’s police officers and decimate their morale.

The city’s Citizen Review Board is set to meet tonight, Feb. 23, at Old City Hall. This will be followed by a Thursday, Feb. 25 discussion on the final draft of the ordinance presented to the City Council by the City Attorney’s Office.