Charlie Crist brought in more than $1.5 million in the first month of his campaign, but he's got a long way to go. 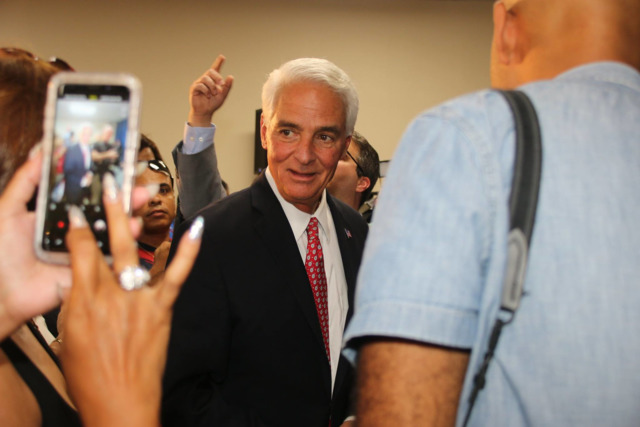 Democrat Charlie Crist brought in more than $1.5 million in the first month of his campaign to return to the governor’s mansion.

But he will have a long way to go to become competitive financially with Republican Gov. Ron DeSantis.

DeSantis’ political committee, Friends of Ron DeSantis, reported Thursday that it raised $7.582 million in May, after it raised nearly $14 million in April.

In all, the DeSantis committee raised about $30.6 million during the first five months of the year and had about $39 million on hand as of May 31, according to the report posted on the state Division of Elections website.

Crist, a Pinellas County congressman, began raising money in early May for his bid to unseat DeSantis in 2022. He brought in $1.214 million for his political committee, Friends of Charlie Crist, and another $323,963 for his campaign account, newly filed reports show.

Crist was elected governor in 2006 as a Republican and served one term before running unsuccessfully in 2010 for the U.S. Senate. During a campaign appearance Wednesday in Tallahassee, Crist said he will have the money to compete next year and jabbed at DeSantis, who has been traveling to other states amid speculation he will run for president in 2024.

“You know, instead of going to San Diego and the Northeast and wherever (DeSantis is) going for his presidential run or whatever it is he's doing, I'm here in Leon County,” Crist said. “I was in Alachua County this morning. Later, I'm going to be in Palm Beach County. … You go to the people. You travel the state. You look them in the eye. You tell them what you want to do and listen to what they want and what they need.”

Before he could battle DeSantis in November 2022, Crist will face Agriculture Commissioner Nikki Fried in a Democratic primary. As of late Thursday afternoon, a May finance report for Fried’s political committee, known as Florida Consumers First, had not been posted on the Division of Elections website.