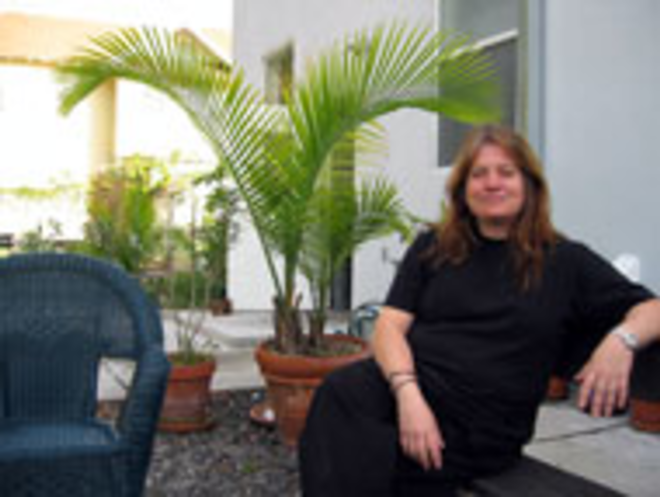 The little 1920s fourplex at 109 W. Columbus Drive in Tampa has housed a lot of enterprises over the years, most recently a boxing gym, a hairdresser, a soup kitchen and an auto parts store, to name a few. Probably none of them was as hard to pronounce or quite as unusual as the current occupant: Bleu Acier (bleh ah-see-ay). French for blue steel, it signifies that point in the heating of steel at which it becomes malleable. Master printer Erika Greenberg Schneider has been working for two years to turn the Tampa Heights storefront into a home for herself and her daughter; a studio for her husband, French steel sculptor Dominique Labauvie, and a fine art print shop and gallery. She's got several presses, including a French etching press built in the 1960s based on a 15th-century blueprint and an 1890 Steinmesse & Stollberg lithography press that was built in a factory seized by Hitler to make weapons and later bombed. She's got a story for every press in the place.

"I'm an old machine person," she says, looping an arm affectionately around one press. "I love them."

Schneider also clearly loves collaborating with artists in ways that might well make her an interesting force in Tampa's artistic landscape.

She came here in 1998 to be near her ailing father, after living in France for 20 years and working as a master printer. She got a job at the University of South Florida's fine art printmaker Graphicstudio, and her husband had a public art commission at Tampa International Airport. They lived in a warehouse in the Channel district until he returned to France to work.

She left Graphicstudio in 2002 and is now teaching part-time at the university and working on collaborative and contract printmaking here in her own shop.

She's also turning her home into a gallery with a series of exhibitions, performances and salons. For a grand opening in January, dancer/choreographer Elsa Valbuena designed a piece that started in the front gallery, went through the apartment and out to the back patio.

Arts promoter Marilyn Mars is working with Schneider on a series of monthly salons. The next one, on Feb. 19 at 7:30 p.m., features Florida Orchestra principal bassist Dee Moses in a performance/discussion called "Ars Sonorous: The Color of Music," and an exhibition of works by six European artists selected to complement the subject (Max Neumann, Dominique Labauvie, Pierre Mabille, Francois Fiedler and Michel Haas). In March, they'll present Jeff Whipple's new theater piece and in April, new works by Theo Wujcik.

Schneider also is working on bringing in interesting artists from Europe for residencies and collaborations. One of them is Sylvie Blocher, a fascinating public artist who is working on a stunning interactive piece on the Rhine River that addresses the still ongoing postwar reconciliation between France and Germany. Schneider has been sending Blocher information about the area to rouse her interest while working on grants and commissions to pay for her trip.

Indeed. Rick's on the River is around the corner, and La Teresita is just up the street. That's grouper sammies and beer on the river, and the best cafe con leche in town. And now an art gallery doing truly interesting things. Looks like previous efforts to gentrify all the soul out of Tampa Heights have failed admirably.

(Bleu Acier events are free and open to the public, though donations are graciously accepted. To get on Bleu Acier's mailing list, contact her at [email protected] or 813-272-9746.)

Bowling Alley ChicMeanwhile, the snoozing Channelside entertainment center is getting a shot of adrenalin with the opening of several new spots. The absolute best looking is Splitsville, the bowling and billiards lounge with its retro movie-set glamour, downright cozy lanes and old-style billiards parlor. Starting with the giant bowling pin and eight ball out front and the chic red and black patio cafe furniture, the design turns handsprings to delight visitors. Inside Sally's Alley, the swanky restaurant portion of Splitsville, the luscious red and white decor is Marilyn Monroe sexy. The design sounds cheesy, and it is over the top. But Splitsville is truly fun to look at and much more woman-friendly in concept than that other recently opened Channelside emporium specializing in breast meat and tight T-shirts.

Behind the TimesSpeaking of enchanting design, Vanity Fair's January issue salutes the masters of modernism, a radical design movement that started in Europe between the two world wars and moved to the United States when its practitioners faced opposition from Hitler, Mussolini and Stalin, among others. Although the originators, Mies van der Rohe, Walter Gropius and Le Corbusier, are dead now, their students are still around, among them: Philip Johnson, Pierre Koenig, Oscar Niemeyer, Florence Knoll Bassett …

And Dan Kiley, designer of the downtown Tampa garden the city intends to destroy. The Vanity Fair article chronicles the backlash against modernism known as postmodernism but says the pendulum is now swinging back. Seems the works of these people are now being rediscovered and restored. By the time Tampa catches up with the rest of the country, our own work by one of those masters will be gone, and he will likely be dead. Is there any chance at all, for a change, that we will realize what we've got before it's gone?