Attorney Timothy Driscoll told cops he represented the city of St. Petersburg, which the city says is not true. 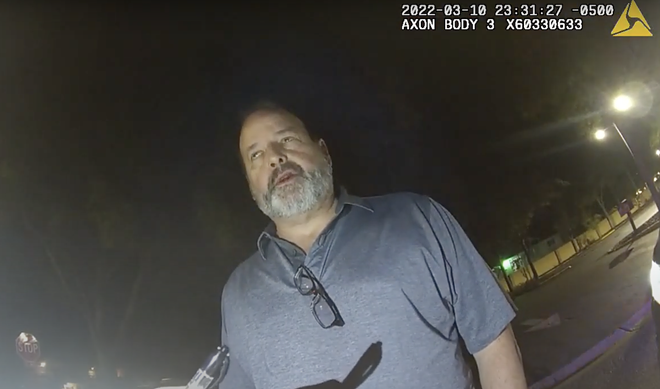 On Thursday, March 10, 2022 at 11:22 p.m, SPPD officer Samantha Perez pulled Driscoll over at the intersection of 36 Avenue N and 3rd Street N. Dashcam video from Perez’ squad car shows that Driscoll made a wide right turn and forced another driver to run over a curb to avoid him.

“Hi, are you OK? I saw you come around the curve, and almost smoked that Jeep,” says Officer Perez, as she approaches his white Tesla.

He then looks at his car radio, trying to figure out how to turn down the song “My Universe” by Coldplay X BTS. “I can’t turn this thing off,” says Driscoll.

“Are you sure you’re OK?” Perez asks before getting his driver’s license, registration and insurance. “Did you see the Jeep at all? I know you really made that wide right turn.”

“No, I didn’t even see that Jeep,” Driscoll responds while slurring his words.

Perez went back to her car to run Driscoll’s information, and the driver who he almost hit drove by to thank her for stopping him. She then calls for backup, asks Driscoll to get out of his car, and starts a series of field sobriety tests.
Perez is seen showing Driscoll how to walk the line multiple times. On his second attempt, he walks it, but stumbles. The officer then asks him to stand on one leg. After several attempts, he can’t keep the stance for more than a few seconds at a time.

Perez then reads Driscoll his rights and asks if he had been drinking that night, to which he says no. She also asks if he had worked that day, and Driscoll responds with yes.

“I’m a city attorney, I represent this city and I represent other cities too," Driscoll said.

But that isn’t true, according to St. Petersburg’s legal staff.

“I was not trying to represent that I am the city attorney for St. Petersburg. I do work for the city, but not as its attorney,” he wrote in an email to CL.

He said that he works as a special hearing officer, however, the city attorney said that doesn't mean he represents the city.

Driscoll has served as New Port Richey’s city attorney since 2016. Currently, he gets paid $11,000 a month for that role. He previously served as attorney for St. Pete Beach, where he was forced to resign in 2007 because city commissioners no longer trusted his legal advice.

In the body camera video, Perez asked Driscoll again if he saw the Jeep that he almost hit, saying that he almost caused a collision. He said he never saw it.

Driscoll then once again tried to make it seem like he represented St. Petersburg as an attorney.

“I represent law enforcement, I’m the city attorney and I understand the importance of everything that we do here, and it’s what I do for a living and I totally understand it,” says Driscoll.

Perez then asks him to turn around and places him under arrest for driving under the influence.

Another officer’s body camera video shows Driscoll being searched. The cop found poker chips in Driscoll’s pockets and removed them before placing him in the squad car.

“Oh, comfortable,” Driscoll said as he sat down, followed by a laugh.

“That might be the first time I ever heard that,” the officer said before closing the door.

The police report from that night says that “an odor of alcoholic beverage” could be smelled on Driscoll’s breath. It also said that he had a “blank expression” and “thick tongued speech.”

Driscoll refused to blow, however, so the cops could not determine what exactly his blood alcohol content was.

After completing a drunk driving course, a Mothers Against Drunk Driving victim impact course and community service hours, Driscoll received a “reckless driving when reduced from a DUI” charge.