Design by Joe Frontel
The cover of the Aug. 4, 2022 edition of Creative Loafing Tampa Bay.
Off the park behind shuttered Edward White Hospital, St. Petersburg's Booker Creek flows through a rather scary culvert. Vines drape from the steel walls of an imposing, artificial slot canyon. The entrance is overgrown, densely shaded, littered with discarded office furniture. A watergoat, designed to catch debris before flowing into the catchment lake, doubles over itself, crimped and useless.

The park and spillway speak to the contradictions that follow design apart from nature. On one side of the creek is a manicured apartment complex; on the other, street people camp in a grove of untended Australian pines. The lake holds a station for distributing alum, an age-old and effective method of gathering contaminants. Fencing cordons off sections of the watershed, then elsewhere stops at random. A jogging path and picnic shelters lend the area a park-like quality, though the steady rattle of Interstate-275 preserves an industrial feel.

Booker Creek, a Tampa Bay Times reporter noted decades ago, suffers from a "split personality." Its course falls some 60 feet in just 6.5 miles, changing character with the seasons. A turn of the 20th-century news report described how a "six inch brook" could swell after a big rain into a raging river, six-feet deep, rushing dangerously "with the speed of a mill race."

The city's strategy has always been contain and control. The creek has "been bridged, culverted, and girdled with concrete and steel walls," the Times' Peggy Vlerebome observed in 1972; it has been "raped in the course of urban development." 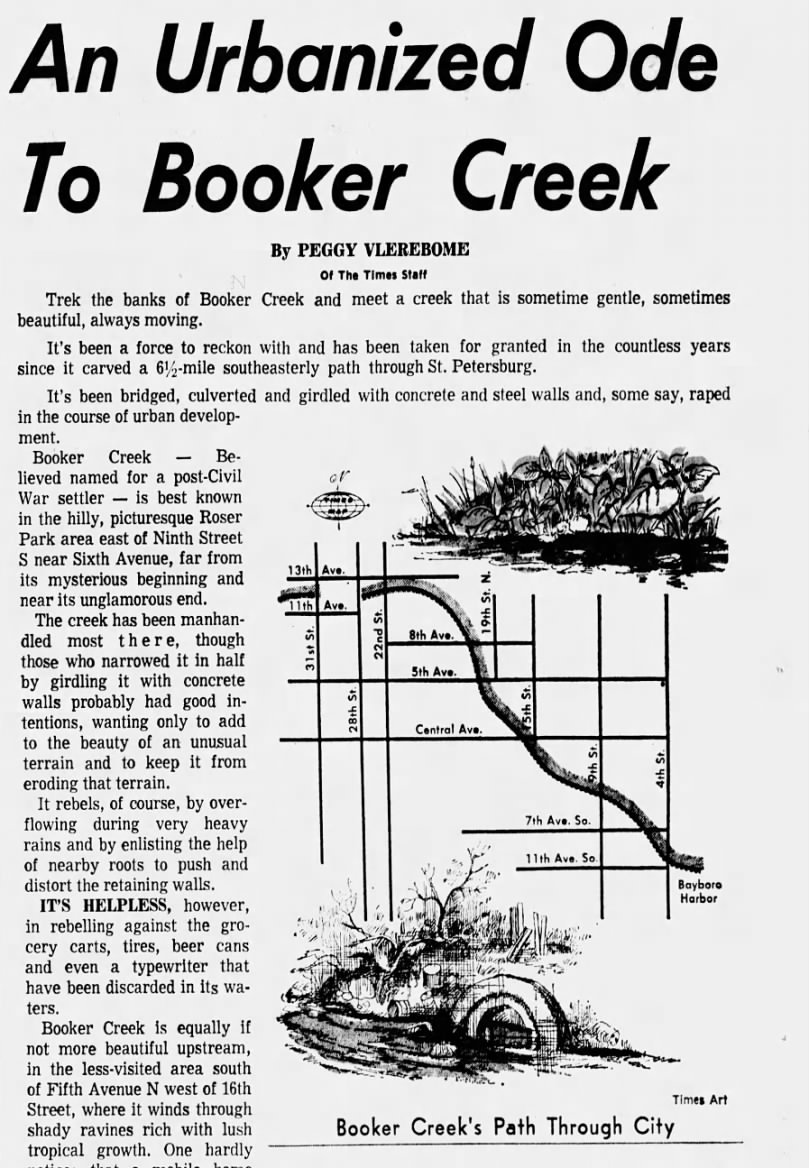 28 May 1972, Sun Tampa Bay Times (St. Petersburg, Florida) Newspapers.com When the owners of the Fusion Apartments wanted to build over Central Avenue, the creek was ruled a culvert. Just a few years later, when the Edge District wanted to create a wet zone (allowing open consumption of alcohol), a shrewd attorney proved the same creek to be navigable. Local eccentric Dan Harvey maintains the stream as an urban oasis on the north side of Central, across from Fergs' Sports Bar, then it dips under First Avenue North, culverted by Florida Power in the 1950s.

Once a shady ravine with lush tropic growth, its banks got buried under pavement and concrete pilings with the construction of Interstate 275. The stream reappears as connected lakes bracketing the interstate today, though if we trace these waters into the past, the waters run much further.

I've been nosing around the upper reaches for some time now. Pushing the reasonable limits of a relationship, I asked my partner and photog Julie Armstrong to trace the creepy slot canyon, working our way to the source—wherever that happens to be.

We trespassed over trampled chain link and down a weedy path, into the liminal area between gated apartments and medical facilities. The creek disappears by the new Uptown Kenwood townhomes ("Your Private Retreat," ads boast, "perfectly situated in one of Tampa Bay's most desirable areas"). A dip in the pavement provides a trace down 11th Avenue N. City Wilds: Paddling toward reparations: Booker Creek, a stadium nobody likes and a city's unresolved conflicts.

Between 25th and 26th, the ditch daylights again as "Booker Creek Linear Park" (an unmarked city tract) then cuts northwest, channeling beneath private homes and drainage culverts, before opening into "Emerald Lake." A pump station nestled by the playground at Sylvia C. Boring Park says we are on course.

I recognize the squared-off reservoir, built in the early 1950s, from my research. After World War II, Pinellas County experienced a housing boom. Folks flocked to the everyman's paradise that was mid-century Florida. Historian Gary Mormino describes how property owners transformed old farms, waste land, and citrus groves "into low-cost, middle-class homes in the sun."

The flood of construction, in turn, caused flooding across the watershed.

In 1951 City Council approved a $9-million dollar, 15-year project that replumbed lower Pinellas. The drainage problems that followed rapid overdevelopment were so pell-mell that the city did not even bother to prioritize. The capital plan included 56 tasks, listed not by need but alphabetically.

One such project was the squared-off reservoir before us, the unmarked Emerald Lake. The city would drain this now-industrialized area and bound the reservoir with not one but two dikes. When the interstate came through, Florida Department of Transportation tripled the size, using the area as a borrow pit. They "didn't give a crap about environment," city engineer Michael Perry concedes, "they dug a hole" and left.

As a result of this history, the watershed today disappears. I sip my espresso at Mazzaro's (on 22nd Avenue), pick through a bin of vinyl at Bananas, or strap 2x4's to the roof of my Subaru in the parking lot at Lowes, and never know I am in a creekshed. We have no way of connecting this fenced-off, double-diked retention pond (tucked between Sam's Club and the mini-storage) with an actual, flowing body of water. I have lived in St. Petersburg for decades, made more Lowe's runs than the usual home owner, but have never once thought I was parking in a floodplain. 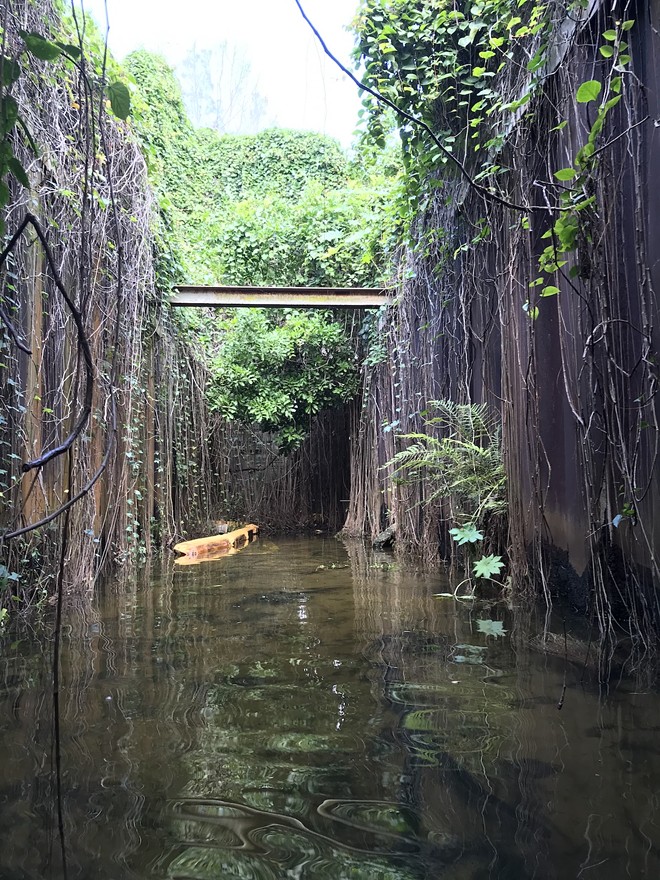 Photo by Thomas Hallock
The slot canyon of St. Petersburg, Florida's Booker Creek is neglected, shadowy, unmarked, and strewn with vines.
Because of the creek's "split personality," headwaters escape our notice.

Julie and I abandon our walk and trek back to our car. Using my cell phone, we piece together the lakes connecting a buried creekshed. Kira Barrera, an environmental stalwart who works for the city, later tracks down a series of culvert maps for me. The drainage maps confirm what I gleaned from newspaper reports, that the "Surface Water System Hinges on Making New Lakes."

No amount of historical recovery, however, can help us pinpoint the source of Booker Creek.

In 1972 the Times' Vlerebome traced the origins to an underground trickle at Ninth Avenue N and 28th Street. Earlier reports push the point further north and west, to Harshaw Lake, at 30th Avenue and 34th Street, behind the Goodwill Superstore and Pelican Palms Village trailer park. Peeling back the years still further, scion of the ranching family Jay B. Starkey (as in Starkey Road) would claim Hanna's Pond, now Sirmons Lake, as the "largest of a series of ponds that once drained this area."

It's a hot afternoon and our pooch is thirsty. Having wound our way from lake to lake, through the neighborhoods of concrete-block homes, Julie and I give up. One cannot say where Booker Creek actually begins. Most likely the area was marsh, dotted with small ponds, linked by ephemeral creeks and sheet flow. As flood plain became private property and parking lots, however, the city settled into this system of dredged lakes and culverts, with the occasional pump by a park to push water back into the bay. None of this technology makes sense for our own time, of course, and policies seem to take ecological health as an afterthought. New ‘Creekshed Project’ will look for the headwaters of Tampa Bay’s polluted gulf: Tracing tributaries helps us see how we have engineered growing crises

The creek remains misunderstood, pathologized, having a "split personality." We are bereft, even gaslighted by this invisible nature. The only reminder of a source to Booker Creek is the ugly steel chute. The culvert by the park speaks to a time when engineers thought they could channel, divert, bury, and erase run-off, mitigating sprawl in the most densely-populated county in the entire state.

The slot canyon of Booker Creek is neglected, shadowy, unmarked, and strewn with vines. It is our monument to water management policies a half century out of date. I’m not sure I could summon the courage to walk the chute myself. It remains a very creepy place.

Thomas Hallock is Professor of English at the University of South Florida St Petersburg. He is currently writing a book of travel essays about why he loves teaching the American literature survey, called A Road Course in American Literature...
More
Scroll to read more Columns articles
Join the Creative Loafing Tampa Bay Press Club