A local skater takes his Bro Bowl campaign to Tallahassee. 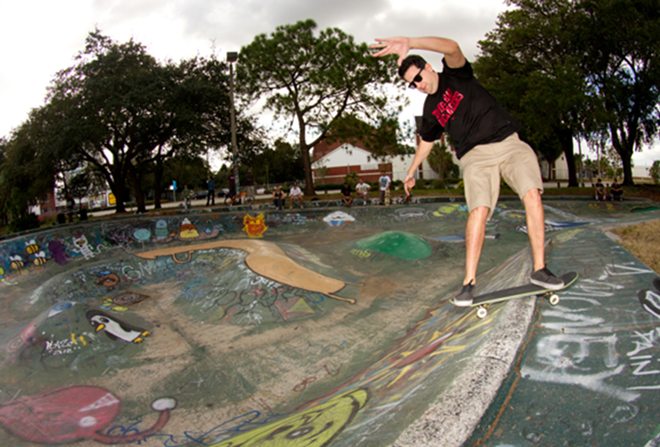 In the late-’80s heyday of bowl haircuts, the Bro Bowl at Perry Harvey Sr. Park in downtown Tampa was the only public skate park in the Bay area and a hangout for skateboarders and their “Betty” girlfriends. Tatted-up punks would pour out of a smelly, beat-up van searching for dirty socks to slip on under their Chucks. One guy in the crew, Tully Carlton — the object of many a Betty’s affection — was famous for his “sick” stunts, like his foot plant off one of the light poles. “Tully inspired us all to be better skaters,” said Shannon Bruffett, 41, a Tampa resident who has skated the Bowl since he was 16.

Bruffett takes the Bowl’s history seriously. A member of Tampa Preservation and a classic car enthusiast, he was interviewed in the 2010 documentary The Bro Bowl: 30 years of Tampa Concrete.

Bruffett’s advocacy of the Bowl is taking him to Tallahassee this Thursday to speak before the Florida National Register Review Board. The board will weigh in on the request that the Bro Bowl be named a historic landmark. Even being considered for the designation was a major triumph, according to Bowl proponent Edwin Velez, local musician and former owner of Blue Chair Records.

“In the last 50 years only 3 percent of submissions are recommended for consideration,” he said. “Additionally, the bowl has received more than 2,000 signatures in support of preservation.” The Skateboarding Heritage Foundation, Surfrider Foundation, Tony Hawk Foundation and the Florida Skate Museum support the campaign.

Bruffett can use these reinforcements. He is not only fighting City Hall — Mayor Bob Buckhorn is against the historic designation — he’s also up against an African-American citizens group and an influential skateboarding contingent who have rallied in favor of a new and improved bowl, which will boast a slick design spearheaded by the Skatepark of Tampa and Orlando’s Team Pain. Plus, there’s the land adjacent to the park, which is targeted for use as part of Encore, a multimillion-dollar urban redevelopment project. The area around the Bro Bowl, known once as “The Scrub,” was settled by freed slaves. By the mid-20th century, it had become a jumping nightlife district, where stars like Ray Charles and Ella Fitzgerald performed. Encore, on the former site of the blighted Central Park Village public housing complex, aims to highlight the area’s African-American heritage in its design, supported in part by a $30 million federal grant. Last week, a group of African-American citizens picketed the Bro Bowl with signs saying “Don’t skate on my history.”

That history includes the death of a young man named Martin Chambers who skated (roller-skated, actually) and shot hoops on the same site as the Bro Bowl in the 1960s. In 1967 a Tampa police officer shot the unarmed 19-year-old in the back after a burglary. A riot ensued, and in response the city opened the park — with a “skateboarding rink” for kids to enjoy — and named it after Harvey, a deceased longshoreman and community peace promoter.

Skatepark of Tampa owner Brian Schaefer says his proposal for a new skate bowl in the city’s new Perry Harvey Sr. Park will pay tribute to the Bro Bowl, offering a photographic memorial and “mogul” (a small hill or bump) from the original bowl. In addition, the new park will boast state-of-the-art design, maintaining the “no fees, no rules, no pads” freedoms but providing new facilities and options for skaters with varied skill levels.

Skaters in favor of the new park include Scott Bentley, owner of Bentley Salon, who says city planners should consider the youth of today in their decisions. “Bring on the jackhammer!” said Kevin Coss of the Pink Lincolns in a Facebook comment. Others have called the Bro Bowl’s preservation the ill-fated pipe dream of over-the-hill skaters.

Yet on a breezy Tuesday afternoon in July, just before the rain, a young dad named Charles Banks skated the bowl with his sons Charles Jr., 10, and Charvis, 8. A 26-year-old Latino skater named Pablo Gutierrez cheered them on.

Right after Charles Jr. pulled off an impressive boneless and noseslide, Banks talked about the campaign heading to Tallahassee. He added that he would like to see the Bro Bowl stay right where it is.

Editor's note: Tampa's Bro Bowl will be added to the National Register of Historic Places, a state review board decided unanimously Thursday, deemed the "best remaining example" of '70s skateboard parks. The designation "will have no effect on the eventual preservation or demolition of the bowl," said Timothy Parsons, deputy state historic preservation officer.