The current track of Ian now has the storm making landfall near the Venice/Englewood area. 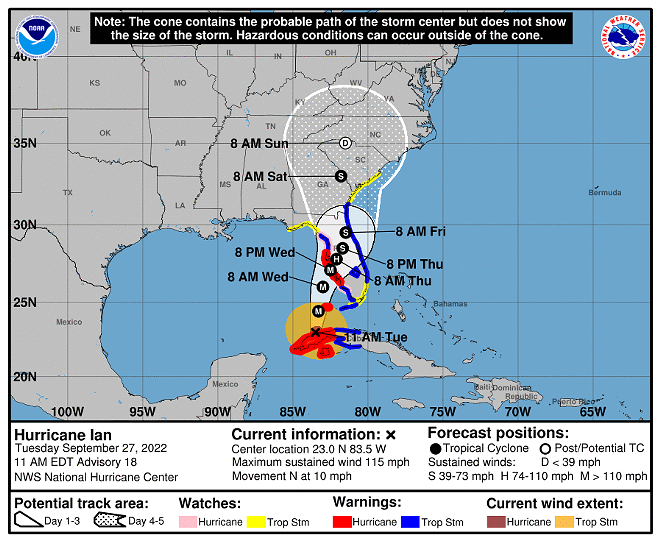 Photo via NOAA
After battering western Cuba, Hurricane Ian has now entered the Gulf of Mexico and the latest track has the Category 3 storm making landfall just south of the Tampa Bay region.

According to the 11 a.m. update from the National Hurricane Center, the storm is now moving north at about 10 mph, and is roughly 130 miles south-southwest of the Dry Tortugas, packing sustained winds of about 115 mph.

The current track of Ian now has the eye of the storm making landfall near the Venice/Englewood area, which should reduce storm surge in the Tampa Bay region.

This is why I've been harping on importance of track adjustments. #Ian is still coming, but slight shift to south reduces storm surge numbers in Tampa Bay Pinellas and increases them from Longboat Key to Bonita Springs. Direction of wind at any point changes based on storm track. pic.twitter.com/5kQFFjl8kb


"Life-threatening storm surge looks increasingly likely along much of the Florida west coast where a storm surge warning is in effect, with the highest risk from Fort Myers to the Tampa Bay region," says the NHC. "Residents in these areas should listen to advice given by local officials and follow evacuation orders if made for your area."

As of Tuesday morning, quite a few Tampa Bay area counties have announced evacuation orders , including residents living in Zones A and B in Hillsborough County, Zone A in Manatee County, zones A, B and C in Pinellas County, and in Level A in Sarasota County.

Hurricane  Ian is expected to strengthen to a possible Category 4 and then weaken slightly as it approaches the west coast of Florida on Wednesday into Thursday.

Regardless, experts are now confident that Ian will make landfall as a "major storm," meaning above a Category 3, with storm surge in the Tampa Bay region of 5-8 feet.