Citing a need to move past divisive symbols and rhetoric, he said such relics have no places in Florida's public spaces. 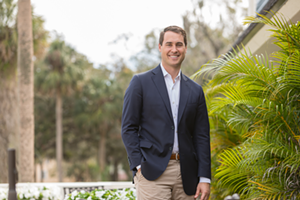 Courtesy of Chris King for Florida

As debate rages across the state over whether monuments to the losing side of the Civil War ought to remain standing one Democratic candidate in the 2018 governor's race has a bold message: Take 'em all down.

That message comes in the wake of white supremacist violence in Charlottesville that was sparked by city officials' decision to remove a statue of General Robert E. Lee from a public space there, and as Florida grapples with its own bitter divisions and sinister, regressive elements as well as the specter of Nazi provocateur Richard Spencer's potential Gainesville speech on September 12.

Chris King, an Orlando area businessman and political newcomer, weighed in on social media Tuesday, calling for the "orderly removal" of all Confederate monuments that occupy public space in the state.

"These monuments should be removed because we should not celebrate literal anti-American ideology or any ideology based on the oppression of any group of people," he wrote. "And to those who say these monuments are needed to preserve our history, I say we don't need memorials celebrating this dark time in our history. As we've seen in Charlottesville this weekend, we live with the legacy of this history every day."

King, who is from the Orlando area, faces a crowded Democratic primary in which Tallahassee Mayor Andrew Gillum and former Congresswoman and daughter of popular former governor/U.S. Senator Bob Graham, Gwen Graham, are already contenders. Miami Beach Mayor Philip Levine and lawyer John Morgan may also jump in. King's message will certainly appeal to a large swath of the Democratic base. Among well-right-of-center Floridians, the likes of which helped push Donald Trump over both the primary and general finish lines, that message would obviously not play well — so if he actually ends up clearing the primary, reaching out to conservative would be a total waste of time.

He contends that there's even an economic argument for doing so.

"Florida's economic engine is built on diversity. We are a state of many races, faiths and languages, each making our state a great place to live in, and each underpinning our economy. But our economic engine has been held back for far too long by the ghosts of the past," he wrote. "Removing Confederate monuments is not just the right thing to do for Florida values and its citizens, but the smart thing to do for Florida's economy. In order to unleash Florida's economic potential, and attract the jobs and investment we need to grow into the national leader we should be, it's time to position Florida as a state with eyes set on the future."

Meanwhile, Congresswoman Debbie Wasserman-Schultz (D-Ft. Lauderdale) is calling on Florida lawmakers to convene a special session where they can make plans for removing a statue of Confederate General Kirby Smith, which at the moment represents Florida in National Statuary Hall at the U.S. Capitol. Lawmakers approved a bill mandating its removal and replacement, but haven't even begun to do so.

"It’s time to stop playing games," she said in a written statement. "No family visiting our nation’s Capitol should have to explain to their child that the statue representing our state honors someone who fought for a philosophy built on hatred and oppression."

She said that state lawmakers ought to consider replacing Smith's likeness with that of one of the Florida historical figures recommended in the bill mandating its removal: Mary McLeod Bethune, George Washington Jenkins or Marjorie Stoneman Douglas.