The state wanted defendant Jamie Bullock to write a letter of apology and she refused. 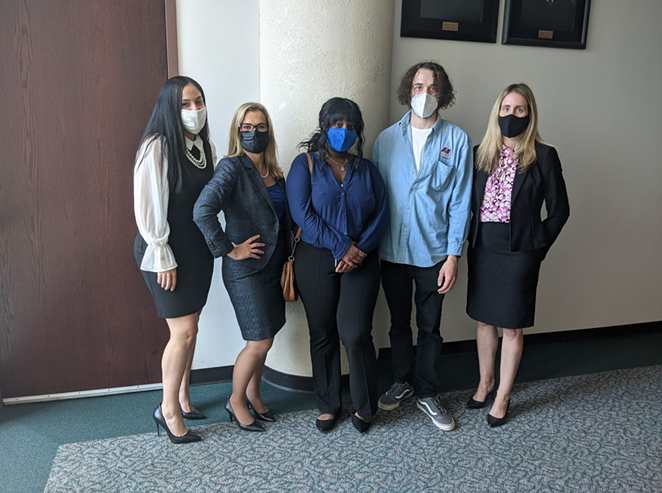 Justin Garcia
Bullock (center), her boyfriend and attorneys stand for a photo inside the Hillsborough County Courthouse.

Jamie Bullock steps out of an elevator into the lobby of the Hillsborough County Courthouse with her boyfriend Dante Perez and her lawyers. She’s heading home with a sense of relief, but she’s still trying to shake her frustration. Serious charges have been hanging over her head for more than a year and the situation has turned her life upside down.

But now, her court case for protesting for Black Lives last year is finally resolved. She’s ready to move on with her life.

“I hope I never see any of you again,” she jokes to her lawyers, and the group breaks out into laughter that cuts through the silence of the courthouse lobby.

What started as a felony and two misdemeanor charges against Bullock that could have resulted in up to five years in prison were reduced to a misdemeanor intervention program, which includes 24 hours of community service and fees, during a hearing on Wednesday.

As part of the intervention, the state also asked Bullock for a letter of apology, but she denied that.

“I’m not going to apologize for protesting for the rights of Black people,” she told Creative Loafing Tampa Bay.

Bullock’s co-defendant Chukwudi Uche, who was also protesting that day but was not involved with Bullock’s arrest, also took a pretrial intervention for a felony concealed firearm charge. He will have to complete 50 hours of community service and write a letter of apology to the state, along with forfeiting his firearm. If these conditions are met by both Uche and Bullock, the Florida Justice Center will take steps to clear their records so that they will not have misdemeanors on their records.

“In every prosecution, our office evaluates the appropriateness of the charges from the beginning of the case until the end,” Grayson Kamm, Communications Officer for State Attorney Andrew Warren’s Office wrote in an email to CL.

Kamm says that the state received new evidence in the past few days—including bodycam video and interviews with defense witnesses—that had a direct impact on the state’s ability to prove all the required elements of a battery on a law enforcement officer charge beyond and to the exclusion of a reasonable doubt at trial.

“Other charges remained against the defendants because public safety requires we hold people accountable for illegally carrying a weapon or putting their hands on an officer,” Kamm continued.

Defense attorneys for both Uche and Bullock stood firm in their stance that their defendants were expressing their first amendment rights when Tampa Police Department (TPD) bicycle officers plowed into the peaceful BLM march they attended last year, and that the state had no evidence of battery on a law enforcement officer. They say there’s no evidence of Bullock ever striking an officer, and that video shows that the water bottle the state claims Uche threw but has no evidence of, struck a cop’s tire, but did not hit a cop. The defense attorneys said the reduced charges were a decent offer, but that the charges should have been completely dismissed.

A jury panel was being selected this morning for the trial of the two activists when the state and the defense teams made the deal. Of the 65 potential jurors who waited outside of courtroom one, only two were Black.

Judge Mark Kiser, who was presiding over the case, walked out of the courtroom to address the crowd.

“We thank you for coming to court early in the morning, but the case has now been resolved,” Kiser said.

The potential jurors took no time to get out of their seats and rushed to the elevators.

Jessenia Rosales, defense attorney for Uche, says she believes that the state attorney violated their mission statement of “pursuing justice and fairness for everyone” through the case. She says that even if it is alleged that her client was found with anything at all on him after the arrest, “You’re completely ignoring the fact that you unlawfully arrested him for nothing.”

Bullock and Uche’s case stemmed from an incident that occurred on Fourth of July, 2020. During the height of the George Floyd uprising, they peacefully marched down Dale Mabry Highway, until the cops arrived in a violent fashion.

Police helicopter video shows four TPD bicycle officers pedaling down a side street straight into the crowd. Shortly after they arrived, a police officer is heard saying, “Try to get charges on someone if you can,” right around the time Bullock was being arrested.

"The police acted like monsters to the protesters that day," Michelle Lambo, defense attorney for Bullock told CL.

Through a “Motion in Limine”, the state had tried to remove any talk of the constitutional right to free speech, the right to assemble and police behavior during the protest from the trial (among other things) but Judge Kiser shot down the key points of the Limine last week. During that hearing, Judge Kiser also threw out the state’s unlawful assembly misdemeanor charge, because Florida state law says blocking a roadway should be a civil citation, not a misdemeanor.

For the entire case, Bullock, Uche and their attorneys have maintained their innocence about their most serious charge of battery on a law enforcement officer, saying there is no evidence of such a thing occurring. Now, after over a year of a case hanging over their heads and the use of taxpayer time and money to pursue charges, they are headed to diversion. They can finally move forward with their lives.

For Bullock, this ordeal that threw her entire existence into a tailspin has now resulted in a simple misdemeanor diversion. She feels that even that is a compromise for her, and that it shouldn’t have taken all this for her to be able to continue on with her life after protesting.

“I’m upset that the state put me through this experience for doing nothing other than expressing my first amendment rights,” Bullock told CL. “But I’m really happy and excited to be able to move forward and leave this case behind me.”