Perhaps it's the combination of copious booze and sleeplessness on our part, but this week seems to have flown by like no other. Here we are, it's Thursday, and we've been saying "why not" and "hell yes" at every turn, thereby testing the limits of our mental capacity.

And we know we're far from the only ones working that M.O. this week.

We were up and about early, but apparently not early enough, because ahead of the event's scheduled start, Vice Presidential nominee Tim Kaine shows up to the Florida delegation's breakfast unexpectedly (as Sen. Bernie Sanders had the day before). Kaine is probably one of those people who doesn't understand that for some people, early mornings can make them feel reptilian compared their chipper early-bird counterparts.

An end to the tyranny of crack-of-dawn functions: that's social change we can get behind.

A range of dignitaries from across the state speaks, including Tampa Mayor and possible future governor Bob Buckhorn, who touts now-Dem nominee Hillary Clinton over GOP nominee and bizarre demagogue Donald Trump, and points out the sharp contrasts between the Dems' convention and that of the GOP.

Bernie bros hold a lengthy press briefing to basically let us all know they're not quite ready to back down, even though their candidate is. Oh, and that they have no idea how Sanders supporters' anger over the whole thing will play out over the next couple of days, either inside or outside the arena.

On our way to Passyunk Avenue to grab a bite and a beverage ahead of the next thing and catch up on some work, we spot the former Ohio Congressman and presidential candidate chatting with what looks to be a progressive activist.

In the short span of time we're near him we witness a string of acts of kindness, such as letting others enter the subway before him, cautioning a mother that her little daughter (who was standing on a seat) would go flying when the train jerks to a start and offering an empty seat up to everyone around him who was standing (though he eventually took it himself after nobody went for it). 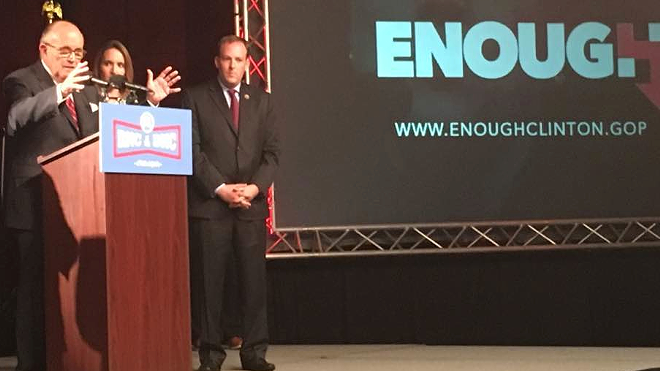 After a quick bite and a beer, we Uber to this industrial area where former New York Mayor Rudy Giuliani and friends are asking out loud why there is no talk of death and destruction, at least with a Republican framework, at the DNC.

We apparently pass as a South Carolina delegate, because we are able to hang out in the lobby bar at the hotel where that delegation is staying without anyone asking us to leave. We get a little work done. Yay. 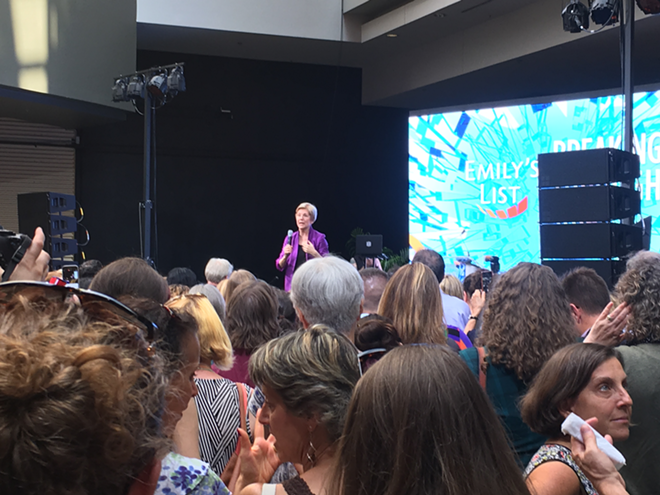 Too much bubbly; time to chill out for a minute.

With a certain level of credentials, something called a floor pass is our God-given right. They are supposed to be issued in hourly increments. But on this night, given the dudes on the roster, someone is bogarting all the floor passes.

There's no seating, either, so we pull up a bit of blue carpet and set up shop.

Vice President Joe Biden turns on his famous charm and gifts us all with an utterance of "malarkey."

Kate Bradshaw
What a view, man.

He says Clinton is the most qualified presidential candidate he's seen; no one is more equipped to do the job than her.

He waits about 17 minutes to lay into Trump.

There is, of course, incoherent heckling, which may have been Code Pink, which later sends out a press release bragging about disrupting the President's speech.

Afterward, Clinton comes onstage to smile and wave for a few moments.

We'll charm our way in there again somehow,

This bar is amazing.

We're talking local politics, lamenting the little sleep we're about to get.

While awaiting ride, a sex shop with bizarre presidential race-themed sex toys displayed in its front window catches our eye.

We call our own bluff; maybe there are some things here we won't try.