A brief convo with a lesser-known contender in the St. Pete mayor's race. 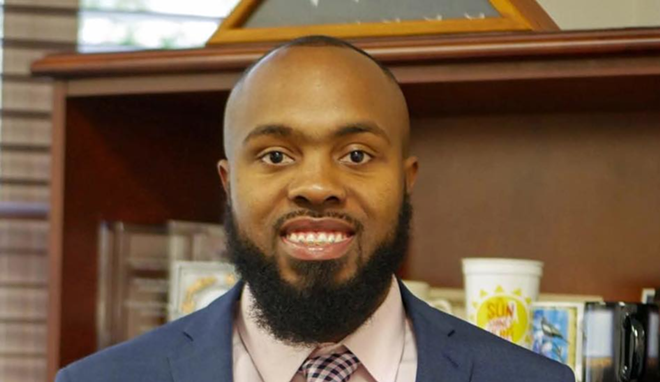 Anthony Cates III was one of the four candidates who responded to our request for an interview, though due to schedule conflicts we could not sit down with him for an in-depth interview. So he asked that we email him our questions.

Cates is a lifelong resident who was in management at the now-defunct Walmart in Tangerine Plaza. That experience may give him a unique perspective on south St. Pete and the needs of locals in an area that's now essentially a food desert.

This is Cates's third run for mayor — though his campaign has gotten the least amount of press. That could be by design (he cites "tact and diplomacy"), given his casting of the best-known candidates as "corporate bought politicians."

Here are three things we learned from our email exchange with Cates.

"Affordable Housing. Economic Development. Livable wages. Education. Infrastructure," he writes, with an emphasis on early-childhood education as well as sustainability.

...And that he doesn't trust the monied establishment to do the right thing.

"The lack of leadership from corporate bought politicians whom don't have the interest of people at heart. Before my father Anthony Cates Sr. passed away April 10th, 2016, he said to me, "You have to get the people." So one by one that's what I've been doing. Reaching out to my citizens trying to get a better understanding on what it is that they need."

"Wal-Mart was never meant to be a long term solution from the beginning. Wal-Mart just like GTE Credit Union were brought to the Midtown area under the auspice of bringing economic stability to the region. Neither served nor is serving their purpose. We lack access to resources across the board."

Cates writes that chief among his efforts at bolstering south St. Pete's economy would be "connecting our unemployed residents with employers that provide career opportunities with job training and development."

And he's already got a name for it.

"This center will serve as the Mecca of Connecting Americans Through Economic Stability (C.A.T.E.S)," he writes.