Depeche Mode frontman Dave Gahan wakes up every night at 4:15 A.M., because that's when he overdosed on coke and smack in 1996. He says, "I look at my watch and know in advance what the time will be. I think somebody wants to remind me that I have a good life -- and it's not for me to decide when it ends."


The Cure posted live songs from their December MySpace Secret Show on their MySpace page. Also, Coachella organizers cut the power on The Cure during their headlining set because they broke curfew. Coachella people -- if you don't want to run late, don't schedule bands that regularly play three encores! 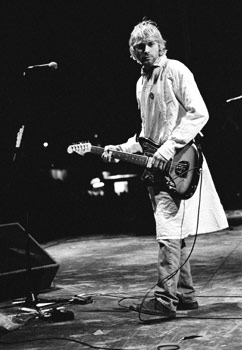 As reported by Tampa Calling earlier this week, Pixies will drop the Minotaur boxed set in June. Meanwhile, Kim Deal and her sister/bandmate Kelley talked to Pitchfork about the upcoming Breeders DIY Fate To Fatal EP and the Pixies' summer gigs in Europe.


Nirvana's legendary 1992 Reading set will hit DVD in November. Kurt Cobain rolled on-stage via a wheelchair and performed while wearing a hospital robe (pictured left). The disc will feature restored video, 5.1 sound, and bonus material. A bootleg version, not sanctioned by the band or label and without enhanced video and sound, will appear in early May.


Pearl Jam guitarist Mike McCready says the band completed 14 songs so far and are about halfway done with the new album, which should be out before the end of the year. Also, director Cameron Crowe is working with Pearl Jam on a film about the group.


Smashing Pumpkins frontman Billy Corgan is testing a subscription model for access to exclusive content. $40 gets you twelve weeks worth of e-newsletters with studio diaries, multimedia files, lyrics, etc. Corgan says it's not about money. "In exchange for a fixed resource base, fans will be let inside in an unprecedented way."


In other Pumpkins news that I suppose this wasn't financially motivated either, Pitchfork 'reports "Billy Corgan finds innovative new ways to embarrass himself." Leave it to pro wrestling to help him! Ticketholders for the Nine Inch Nails/Jane's Addiction tour (May 9 at Ford Amp), cross your fingers that Jane's makes it that far. They've been fighting again. Perry Farrell isn't concerned though. "I'm not going to tell you it's been all smooches and hugs. But it shouldn't be because that would be a bore ... As long as they can handle it, I can handle it."

Morrissey (pictured right) gave Coachella concertgoers a moment to remember last weekend. Midway through the set, he said, "I can smell burning flesh, and I hope to God it's human." A few minutes later, Moz left the stage! He would return, explaining, "The smell of burning animals is making me sick. I just couldn't bear it." The rest of his set concluded without incident. Moz, you may remember, is an outspoken vegetarian. One of The Smiths' albums is titled Meat Is Murder, after all.