Dingfelder also said he’s going to ask the city to report back to him every 60 days with updates on this initiative. 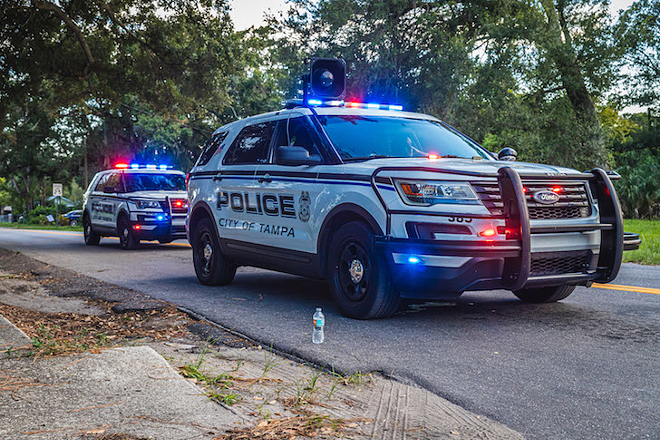 During Tampa City Council’s budget hearing last Thursday, Councilman John Dingfelder surprised many by making a motion for the city to invest up to $1 million into the development of a pilot mental health response program for more effectively managing crisis calls.

So far, the response to this motion has been overwhelmingly positive, earning praise from City Council members like Luis Viera—who thanked Dingfelder for “leading the way” on this issue—as well as local racial justice and mental health advocates involved in the Black Lives Matter movement.

“This is a huge development and a testament to our protesting and mobilization,” community activist ErrDaisha Floyd wrote in an social media post shortly after the first budget hearing.

And Dingfelder seems to think the city and Tampa Police Department (TPD) are on board, too.

In a phone call with Creative Loafing Tampa Bay on Wednesday, Dingfelder said he expects TPD to report back to City Council tomorrow, Thursday, Sept. 10 with either requests for proposals, requests for information or applications from various providers.

“[The request] will be open to everybody in the community. Anybody who wants to be involved [and] work more closely with the city,” Dingfelder said. “We'll see what the response will be. Ultimately TPD we'll negotiate that. And then, after they negotiate a contract, then they'll bring their contract back to City Council for approval."

Presumably, that includes organizations like Gracepoint, National Alliance on Mental Illness Hillsborough (NAMI), as well as local activist groups who have been promoting the development of a CAHOOTS-like program for Tampa.

CAHOOTS is short for Crisis Assistance Help On The Streets. The program originated in Eugene, Oregon and is led by local crisis workers and medics in collaboration with their local police department and a community health center.

Dingfelder also said that he’s going to ask the City of Tampa administration to report back to him every 60 days with updates on this initiative. “I don't want this thing to drag on for two years before we actually put something into play. I'd like to see us up and running within the next six or eight months.”

For months, community members involved in local Black Lives Matter movement have called on city government to defund TPD's $162 million budget and invest a portion of that into social services. This includes the development of a safer and more effective crisis response program—decoupled from law enforcement— for managing mental health-related crisis calls.

The City Council unanimously agreed last Thursday, however, that the proposed $1 million by Dingfelder would not come from the TPD budget, which is expected to see a $13 million increase next year—from its current $162 million to a total $179 million for the fiscal year 2021.

“I'm not one to support cuts like that to public safety. I've been very clear on that since day one,” Dingfelder stated during the Thursday meeting. Where the $1 million will come from in the city’s proposed $1.45 billion budget is still unclear.

The development of an alternative response program for crisis intervention was also recently suggested by USF criminology professor Dr. Bryanna Fox and her graduate research team, which led the charge on gathering community input from Mayor Jane Castor’s Task Force on Policing this summer. Fox specifically recommended that the city hire mental health workers and social workers to co-respond to eligible crisis calls, in collaboration with TPD officers.

Within city limits, the TPD currently serves a central role in responding to crisis calls involving people with mental illness.

TPD officers responded to no less than 5,200 calls involving someone experiencing a mental health-related crisis last year. And under Florida’s Baker Act—the state’s involuntary psychiatric treatment law—at least 2,500 people had been taken into protective custody, due in large part to how law enforcement’s prominent role in Baker Act procedures is formally (and unfortunately) codified.

According to a 2016 study published in the American Journal of Preventive Medicine, an estimated 25%-50% of fatal encounters with law enforcement involve a person with mental illness. The Treatment Advocacy Center reports that people with mental illness are 16 times more likely to be murdered by police, compared to the general population.

To improve community responses to crises, activists from groups like the People’s Safety Coalition (comprised of activists groups such as Dream Defenders, Tampa Bay Activist Network, the Black Collective Movement (BCM), and others) have pointed towards successful crisis response programs like CAHOOTS.

The program—which operates on a $2.1 million annual budget, and was directly referenced by Dingfelder in his motion on Thursday—saves an estimated $8.5 million per year in public spending for the areas served, and provides a broad range of 24/7 mobile crisis intervention services, including acute stabilization for medical and mental health crises, needs assessments, treatment referrals, and transportation.

CAHOOTS responds to about 20% of calls to 911 in the areas served, according to crisis workers involved in the program. And out of 24,000 calls CAHOOTS teams responded to in the city last year, only 150 required police back-up

Whether you’re critical of police or part of the #BacktheBlue crowd, the CAHOOTS model demonstrates a number of benefits for the community and public health that we should all be able to get behind.

None of these services are completely decoupled from either the TPD or Hillsborough County Sheriff’s Office, but then again, neither is CAHOOTS. When reached for comment, a spokesperson from Gracepoint told Creative Loafing Tampa Bay that law enforcement is a “critical partner” in their mobile crisis intervention program.

“A ‘co-response’ model as referenced in the CAHOOTS model would be unique for each community and should incorporate existing mental health services,” wrote the Gracepoint spokesperson. “As models and funding are considered, Gracepoint who is Hillsborough’s largest acute care provider...should be at the table, as the area’s subject matter expert to ensure the impact of these proposals have [sic] the maximum value to the community.”

According to their spokesperson, Gracepoint’s Mobile Crisis team has managed to divert 719 individuals from their Central Receiving Facility—an acute crisis unit—in the last year by providing emergency services in real-time. The program currently operates with only a single team.

According to Gracepoint, a second mobile crisis team could be developed for less than the $1 million proposed by Dingfelder. “That dedicated team could coordinate calls with TPD and provide effective response times, while the current team could focus on Hillsborough County,” said its spokesperson.

Natasha Pierre, the Executive Director of NAMI Hillsborough, also expressed interest in working with the city to develop an improved crisis response program for mental health-related calls, and praised the motion from Dingfelder.

“Absolutely,” Pierre told CL, when asked about NAMI’s prospective interest in helping develop a new crisis response program. “We would love to.”

Last year, NAMI Hillsborough—a local chapter of the nation’s largest grassroots mental health organization—led the effort to mandate a specialized form of mental health training,  known as crisis intervention training (CIT), for all sworn deputies within the Hillsborough County Sheriff’s Office. Previously, this type of training had only been voluntary.

This 40-hour training program—which has been implemented in police departments nationwide— teaches de-escalation skills and informs law enforcement on how to identify and respond to mental health crises without the use of force. The program aims to educate, reduce arrests of people with mental illness, and divert individuals in crisis towards treatment as opposed to jail.

Pierre, who is herself a Black woman with serious mental illness (SMI), intimately understands the complicated dynamic between law enforcement and people experiencing mental health crises—particularly within Tampa Bay’s most marginalized communities.

“For far too long it's been left up to law enforcement to determine the severity, I guess, or the degree of crisis in any situation,” Pierre said. “Having some of these calls be filtered and funneled into behavioral health professionals ensures that, one, we can lessen the load of law enforcement—deputies and the police department—and we can ensure better outcomes.”

“Mental health is health, and law enforcement involved in a health crisis just doesn't make sense at all,” Pierre added.

Late last year, Tampa Chief of Police, Brian Dugan also announced the rollout of a crisis intervention training (CIT) program for officers, which NAMI Hillsborough has been loosely involved in. The status of its implementation, however, is unknown—although CL requested comment on this matter from TPD back in June.