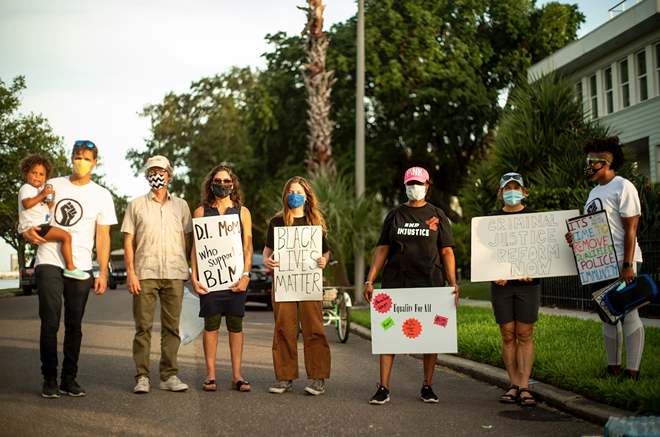 It’s been three weeks since Creative Loafing Tampa Bay disabled comments on its website cltampa.com. Social media users can still clap back, but we're now asking for letters (read: emails) to the editor instead… and it’s working. After countless failed efforts at sending letters—part of the criteria says, “Letters should be a minimum of 150 words, refer to content that has appeared on Creative Loafing, and must include the writer’s full name, address, and phone number for verification purposes—two stories that appear in this issue finally generated more thoughtful correspondence.

Handling responses to those articles—Jenna Rimensnyder’s take on a renaming of Pinellas’ Dixie Hollins High School and Christopher Cann’s post on a Pasco restaurant that’s a safe harbor for law enforcement—mean that I’m spending more time in my inbox and on the phone than on Twitter quarreling with the Liberty Counsel, which is a double-edged sword.

On one hand, I get to actually talk with readers who agree and disagree with our content; CL serves its readers and the community, so touching base is our greatest privilege after getting to actually make this newspaper and website. On the other side of it, I’m spending less time reporting and finishing stories (the pile of drafts growing on mine and Colin’s desks grows scarier each day). That’s on top of coordinating with contributors to wrangle up CL’s 30th annual Best of the Bay issue plus working on the newspaper’s Press Club offerings and outreach (we still haven’t hired anyone back since the March layoffs). As usual, editorial—and really, every department across what’s left of the seven papers in our media group—is overwhelmed. But we’re also inspired.

We’re inspired not just by our readers, but by the topic they’re writing to us about. Lately, it’s been race and ethnicity.

CL stories about confronting the area’s Confederate past and articles about someone’s aversion to Black Lives Matter protesters struck a chord (and dischords) and sparked conversations. One reader asked how she could protest without hitting the streets. Dixie Hollins’ great-granddaughter contacted us to say she supported a name change for the high school. Others who attended Dixie Hollins high school during desegregation chimed in to acknowledge racial tensions and also give their two cents about what it felt like(less tension of their end). The conversations aren’t perfect, and some of them have cringeworthy moments, but they’re more productive than 99% of what happens on Facebook—and that gives us hope for the future.

Lately, CL doesn’t get too many letters asking us to write less about race. Our readers, and even some of those who normally hate-read CL, know the time has come for a discourse. Their letters show that they’re not tired of the talk. That’s good because protesters aren’t letting up, and there are so many more stories to tell. They’re in this issue (which features the first CL cover for our summer intern Chloe Greenberg) along with other important dispatches like McKenna Schueler’s voting primer, a recap of St. Pete police changes (are you listening, Tampa?), photos from the memorial for Andrew Joseph III, and yet another visit to a local live music scene that can’t catch a break. Thanks to you, these stories will continue to hit newsstands each week (and our website every day).

And we can’t wait to read your responses.