Hairspray gets updated as an inoffensive ode to nonconformity 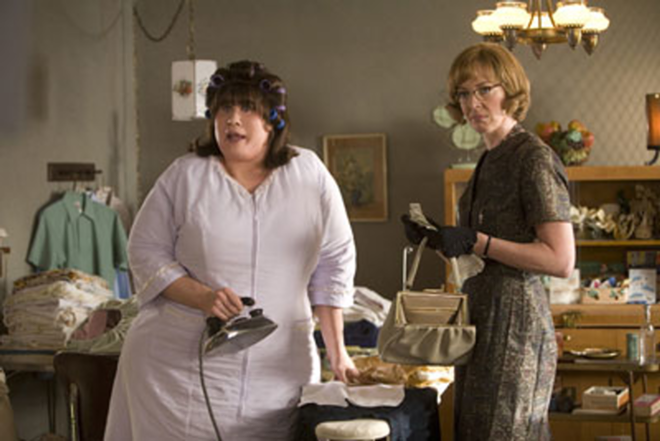 New Line Cinema
IRONING IT OUT: John Travolta and Allison Janney star in this slick and smoothed-out update of Hairspray.

Roughly 15 minutes into Hairspray, right about the time John Travolta showed up in a slip and a fat suit, John Waters' voice suddenly began yammering in my head.

"Something about suburban families loving a drag queen is against everything I believe in," Waters told me during an interview some years back. This was in 1997, five years before the director's mildly subversive 1988 film Hairspray would become a popular Broadway musical and 10 years before the project would come full-circle through the looking glass, transformed into the big, bouncy and thoroughly non-threatening Hollywood movie opening this week at a multiplex near you.

"I think those families should be running in fear," Waters cackled a decade ago, hardly suspecting that his words might come back to haunt him (and us). "I mean, the very idea of a Disney-esque drag queen is something that Divine would be clawing from his grave to chop up with an axe."

Divine, as you may remember, was the cross-dressing, button-pushing star of most of Waters' early films and the person whose character in the original Hairspray Travolta now portrays. Divine's defining moment came early with the director's 1972 debut, Pink Flamingos, the one where Waters' shrill and scary drag queen happily scandalized polite society by, among other things, happily devouring an actual, steaming poodle turd.

Now I'm not suggesting that John Travolta should eat dog shit in order to fill Divine's pumps, but a little bit more of an edge certainly couldn't have hurt Hairspray. Travolta is actually one of the more entertaining elements in the 2007 version (it's a lot more fun watching him in this than in Wild Hogs), but he's also the spitting image of Waters' dreaded, family-friendly drag queen. The same might be said for the whole of this new Hairspray, a cheerfully inoffensive bauble selling a blandly palatable version of nonconformity to mainstream audiences.

Hairspray takes place in 1962 in Waters' pleasantly seedy home turf of Baltimore, a time and place where the emerging momentum of the youth culture (embodied in the film by big hair and rock 'n' roll) is heading for a showdown with the repressive mores of the old guard, particularly the pervasive racial segregation of the time.

Our hero is teenaged Tracy Turnblad (newcomer Nikki Blonsky), a pudgy, beehived misfit who bursts into song at the drop of a hat (as does everyone here), buoyantly crooning "I feel like a movie star" in the film's very first scene from, appropriately enough, high atop a trash truck.

That's about as close as the movie gets to the trashiness so beloved by Waters, but hairspray has good, semi-wholesome fun charting Tracy's almost accidental progress from chubby rashiness, but Haiunderachiever (dozing in class and earning demerits for "inappropriate hair height") to unlikely rebel with a cause. Rocking her uptight world with moves learned from the black kids in detention, Tracy gets picked to be a regular dancer on a popular local TV show where well-groomed white kids politely move their bodies around a dance floor. Meanwhile, one program a month is reserved for the black teens to strut their stuff on "Negro Day."

As Tracy becomes something of a local celebrity, the other white kids start dressing like her, loosening up and even adopting some of her more provocative attitudes — "I wish every day was Negro Day!" gushes the ever open-minded Tracy. Eventually, the white and black kids begin mixing, and when the evil TV station manager (Michelle Pfeiffer) cancels "Negro Day," the kids band together to march in protest. Tracy winds up becoming a fugitive from the law but returns just in time to transform the movie's climactic dance contest into triumphant chaos, as all the newly integrated black and white boys and girls dance their hearts out in celebration of racial equality, loud music, an end to negative body-image stereotyping and the freedom to make atrocious fashion choices.

Perhaps the best thing that might be said about Hairspray is that the movie looks pretty good, with director Adam Shankman, a former choreographer, filling the screen with groovy colors and some of the more engagingly plotted sequences of bodies in motion since Absolute Beginners. Shankman clearly respects his dancers and shoots them in ways that show off their chops while giving us the big picture, avoiding the rapid-fire edits and tight shots of scattered body parts that are now practically mandatory for communicating speed and energy. Eat your heart out, Dreamgirls.

The music, on the other hand, is a mixed bag, and that's not good news when you're talking about a musical. The movie's best tunes come all too quickly — an uninspired but moderately catchy pastiche of early-'60s pop with traces of R&B and show tunes thrown in — but the cumulative effect is awfully dull, and many of the songs spell out their messages with far too little humor or subtlety.

Some of it gets downright preachy — "People who are different, your time is coming!" announces Tracy before launching into one of the film's signature anthems — to the point where it's easy imagining a younger John Waters visibly cringing at such high-minded socio-political ideals worn so visibly on the sleeve.

Then again, maybe such overblown statements are a necessary evil for modern audiences more attuned to Broadway musicals than to the rigors of civil rights lessons or the odd contours of underground filmmaking.

In retrospect, the original Hairspray, while certainly no masterpiece, is a surprisingly watchable fusion of Waters' shock tactics and the mainstream, getting its messages across while spoofing message movies and taking the piss out of nostalgia while paying homage to what's valuable and interesting in our pasts.

This year's brand of Hairspray, on the other hand, barely pretends to be anything other than a well-crafted diversion, something to be gawked at and then forgotten. Travolta (as Tracy's mom, Edna) wiggles and prances around on high heels, and the audience snickers because they know it's safe.

It was probably inevitable that Hairspray would be watered down (you should excuse the expression) with each successive incarnation, from screen to stage to screen again, and this latest, all-singing, all-dancing version is simply the latest sweetly clueless confirmation of that process.