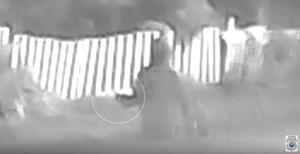 Screen Shot, Tampa Police/YouTube
Grainy surveillance video shows a "person of interest" walking toward — and running away from — the scene of one of the shootings in October.

Philanthropist, retired banker and likely mayoral candidate David A. Straz announced Monday he would chip in an additional $10,000 to help authorities find the Seminole Heights killer.

Thus far, Tampa police have yet to identify a suspect beyond a vague description of a tall, light-skinned African American male.

They are hoping that the appeal of a large pot of reward money will draw out vital information about the killer's identity and motive. Contributors to the fund, which now totals $110,000, include federal and state law enforcement entities, restaurateur Richard Gonzmart and members of the community.

“Hopefully, the reward money will hasten the apprehension of a suspect or suspects responsible for these senseless killings and loss of life,” Straz said in a written statement Monday.

For more than a month, southeast Seminole Heights has been reeling from the seemingly random gun deaths of individuals who happened to be walking alone in the area at night.

The latest death happened Tuesday morning, when 60-year-old Ronald Felton was gunned down on his way to a shift at a nearby church that feeds the homeless.