"I am the only person in this race, who has been a pro-choice her entire life.” 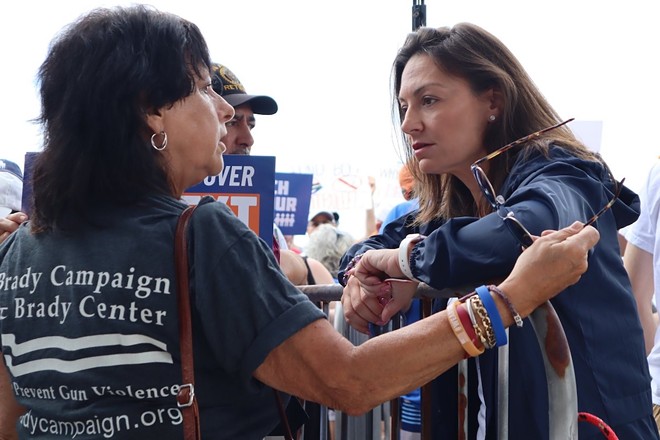 Photo via NikkiFried/Twitter
Nikki Fried (right) during a June event calling for common sense gun laws.
Agriculture Commissioner Nikki Fried over the past five years has gone from being a medical-marijuana lobbyist to the Florida Democratic Party standard-bearer to an underdog in Tuesday’s gubernatorial primary election.

Selling herself to voters as “something new” as she battles U.S. Rep. Charlie Crist in the primary, Fried has sparred with Republicans during her single term as agriculture commissioner and at times has been criticized by progressives.

But lately, as she tries to win the primary to take on Gov. Ron DeSantis in November, Fried has focused on women’s rights after the U.S. Supreme Court in June overturned the landmark Roe v. Wade abortion decision.

“We've seen in some areas a 25-points swing from where we were to where we are today, because this is one of those decisions that is a litmus test,” Fried said this week.

When she formally entered the gubernatorial race just over 14 months ago, the 44-year-old Fried was all about countering two decades of Republican leadership in Tallahassee that she said has blocked “health care, wages, education, justice, the environment, marijuana and equality of opportunity.”

Trailing in fundraising and most polls, Fried maintains she’s the moderate in the Democratic primary with Crist, who has decades of name recognition as a former Republican governor, education commissioner and attorney general. Crist was elected governor in 2006 as a Republican before becoming an independent and then a Democrat.

While she has been hitting Crist on his past actions as a Republican, particularly those regarding abortion, Fried acknowledged her campaign “significantly” refocused on women’s rights after the U.S. Supreme Court abortion decision in June in a case known as Dobbs v. Jackson Women’s Health Organization..

“Everything that we have fought for, for 50-plus years, is on the line,” Fried said Sunday while in Tallahassee after an abortion-rights rally. “Democracy is on the ballot, not only in November, but in August. Because let me make this very clear. I am the only person in this race, who has been a pro-choice her entire life.”

“It is a critical policy issue,” Jewett said. “And with the Dobbs decision, it is possibly the issue that can help Democrats mobilize and energize their base and convert more independent and swing voters and overcome the numerous hurdles that stand in their path —- DeSantis' popularity and money and the two-year midterm election cycle with an unpopular Democratic president.”

But Jewett said the contest will likely come down to who Democratic voters believe has a better chance of defeating DeSantis in November.

“I think electability and name recognition help Charlie and many Dems hope he can repeat the Biden victory —- a non-threatening, more middle-of-the-road Democrat rather than a fire breather from the progressive wing,” Jewett said.

Fried, a Miami native, sees herself as holding the middle ground in the primary and general elections and talks of a need for everyone to find ways to work together on issues.

For her campaign colors, Fried’s signs and many t-shirts are bathed in battleground purple rather than the Democratic blue, while campaign signs proclaim, “Roe the Vote.”

“My mom is a Democrat. My dad is a diehard Republican,” Fried has said on the campaign trail. “They live different lives, but they are not enemies. And I am where I am today because of the influence of both of them.”

Fried’s parents divorced when she was 13, and she was mostly raised by her mother, a preschool teacher.

Fried went to the University of Florida, where she earned bachelor’s, master’s and law degrees, while also cutting her political teeth as student body president.

After lobbying on medical marijuana and other issues, Fried entered the 2018 agriculture commissioner race after becoming frustrated with roadblocks from state health officials and lawmakers in getting cannabis to Florida patients. Voters in 2016 approved a constitutional amendment that broadly legalized medical marijuana.

Fried pulled off a narrow victory in 2018 to become the only Democratic statewide elected official. Often clashing with DeSantis over the past four years, Fried has struggled to maintain a limited voice on the state Cabinet.

Many Floridians might recognize Fried’s name from gas pumps, where it is affixed to Department of Agriculture and Consumer Services inspection stickers. A Fried move in 2019 to include a picture of herself on the stickers was rebuked by Republican lawmakers, who required her office to replace the stickers that had been put up with her picture.

Fried also has faced scrutiny because of needing to update financial-disclosure forms because of previously unreported income and has needed to defend past support for Republican Attorney General Ashley Moody, whom she knew since college, and for working on medical-marijuana issues with controversial U.S. Rep. Matt Gaetz, R-Fla.

“This does not make us friends,” Fried said this month of working with Gaetz. “I don't approve of who he is. What he says. And I certainly don't approve with what he does. But implementing the will of the people (on medical marijuana) is more important than the partisan politics. Isn't that what you want in a governor, someone who puts partisan politics aside and works for the good of all Floridians?”

As examples of her clashes with DeSantis, Fried called for a federal investigation into how his administration distributed COVID-19 vaccines and labeled as “heartless” his approval of a bill that banned transgender female athletes from competing on high-school girls’ and college women’s sports.

The Republican Party of Florida countered by labeling Fried a “lockdown lobbyist” who “tried to close Florida schools and attempted to overturn Governor DeSantis' executive order to get our kids back in the classroom” during the COVID-19 pandemic.

As agriculture commissioner, Republicans have criticized her handling of the state’s concealed-weapons licensing program, which her department runs. She has touted removing the influence of the National Rifle Association over the program and suspending weapon permits of 35 Floridians who participated in the Jan. 6, 2021, storming of the U.S. Capitol by supporters of former President Donald Trump.

Still, the number of concealed-weapons licenses issued by the state has grown 30 percent under Fried’s watch —- from 1.95 million on Jan. 15, 2019, to 2.54 million. Also, she is locked in a legal fight with the Biden administration about the federal government blocking medical-marijuana patients from buying guns.

Some progressives and environmental groups, such as the Sierra Club, contend she could have done more for the environment, pointing to reports that changes she announced in 2019 and 2020 to address the impact of burning sugar cane fields have mostly helped the sugar industry.

Fried said she’s “confident” in what her office has done on environmental issues, while acknowledging being limited in what she could get through the GOP-dominated Legislature as she pushed for bans on Styrofoam and for carbon-sequestration programs.

“We also made huge changes to our agricultural water-policy positions inside of the office. We made sure that we're updating best-management protocols,” Fried said. “We have a clean-water initiative that we moved forward and sent cases for the first time ever to DEP (the Department of Environmental Protection) for enforcement. We are vocal on Piney Point (a former phosphate plant site in Manatee County). We've been vocal on the roads to nowhere going through our agriculture communities. We voted no on the plan down in Miami to extend the highways when it would have interfered with the Everglades.”