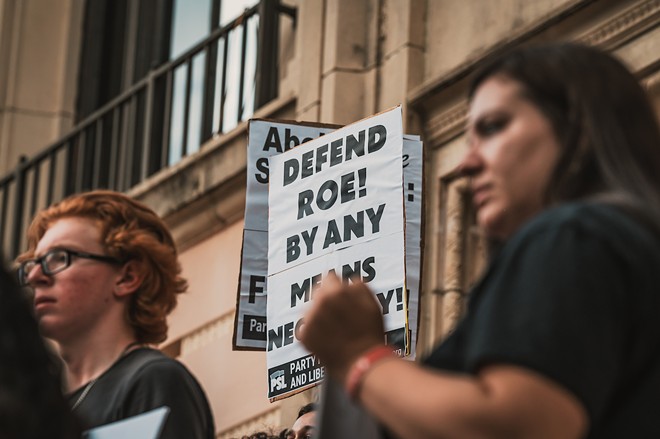 Photo by Chandler Cullotta
Protesters in St. Petersburg, Florida on June 26, 2022.
No sooner had five Supreme Court justices—four men, four appointed by presidents who lost the popular vote, three confirmed by a Senate that represented a minority of the country, two credibly accused of sexual assault, one occupying a stolen seat—declared that women were no longer in charge of their own health care choices, the texts and emails began pouring in.

A candidate for Georgia attorney general: “Women’s health and livelihoods are on the line.”

A text from Wisconsin: “Can you please make a $3 contribution to elect Mandela Barnes to the Senate? We need him to be the deciding vote to end the filibuster and codify Roe into federal law?”

(How the hell did I get on all these lists?)

Nothing raises money like outrage. But passing the hat before Roe’s body was cold, without so much as acknowledging that Roe’s death was a failure of Democratic politics—struck me as tone-deaf. So did the group of Democrats who gathered on the House steps to sing “God Bless America”—which was also literally tone-deaf. So did the predictable encouragements to vote, as if this country isn’t locked into a tyranny of the minority.

And yet, there was Joe Biden, the president of the United States, imploring us to vote: “The only way we can secure a woman’s right to choose and the balance that existed is for Congress to restore the protections of Roe v. Wade as federal law. No executive action from the president can do that. And if Congress, as it appears, lacks the vote—votes to do that now, voters need to make their voices heard.”

Send us money, vote harder, and we’ll try again next year. I can’t imagine why that’s not working.

If this is “a realization of an extreme ideology and a tragic error,” as Biden put it, and “cruel” and “outrageous,” as Pelosi said, then it deserves more urgency than “see you in November.” Of course Democrats should make the election a referendum on abortion rights; more than two-thirds of the public supports Roe, and a large majority wants to see abortion rights protected in federal law.

But there’s no reason to wait. Democrats control Congress, at least until Jan. 3. They should use it before they lose it.

What Biden said is true: The Senate failed to overcome a filibuster on the Women’s Health Protection Act, which would have codifiedl abortion rights. The bill didn’t even get a majority because Democratic Sen. Joe Manchin and ostensibly pro-choice Republican Sens. Susan Collins and Lisa Murkowski voted against it, saying it went too far.

From there, get out in front of what everyone knows is coming next: The right to same-sex marriage. The right of same-sex couples to adopt. The right to consensual sex with any adult you want, in whatever manner you like—i.e., sodomy. The right to privacy itself.

Either enough Senate Republicans will join that Congress will mitigate some of the damage the Supreme Court is doing, or they’ll vote—again and again—to filibuster overwhelmingly popular policies, which then allows Democrats to frame the election around whether the country wishes to return women to the 1950s.

If voters are to believe this is an urgent threat to women’s autonomy, and Democrats are truly invested in fixing it, Biden needs to act now.

Promises to do something eventually aren’t enough, however. If voters are to believe this is an urgent threat to women’s autonomy, and Democrats are truly invested in fixing it, Biden needs to act now. The FDA could argue that states don’t have the authority to ban medications it has deemed safe and effective and make abortion pills available nationally. If federal courts bought that argument, women would have access to medication abortion until 10 weeks of pregnancy.

The government could also lease property it owns—or Indigeneous people, if they wanted, could lease land they control—to abortion providers within states that ban abortion. Or, if Senate Democrats muster enough votes to scrap the Hyde Amendment—which forbids the government from funding abortion—the Biden administration could install abortion clinics inside VA hospitals, military bases, or any other federal facility.

Executive actions aren’t permanent, and they might not survive the litigation that follows. These orders in particular rest on untested legal arguments and would likely face a hostile federal judiciary.

But they would be actions, and doing something a hell of a lot better than the resigned passivity and alms-begging Democrats have come to expect from their leaders.