The pictorial poetry of Denis Gaston

Maybe it wasn’t a good idea to mix tar into that paint. Oil and water don’t mix. These are all things artists learn through the process of just screwing around in the studio until something sticks (literally). Denis Gaston takes this kind of paint play pretty seriously, and you can tell in his solo show Denis Gaston: Poetry of the Eye.

Experimenting is the most invigorating part of being an artist, and Gaston leaves no potential art medium left out of the party. From paper to woodchips embedded in wax to what looks like paint-soaked gauze pads, he builds his canvases into temptingly touchable surfaces. Layering luscious wax onto the piece before roughly carving into or sanding down, both additive and subtractive methods of painting are at work in this exhibit, which seems to be a summary of his work over the past eight years.

When Gaston was young, he was struck by the art from different cultures featured in National Geographic magazines. You can see that Picasso and naïve artists — and the underlying cultural influence of African masks and other primitive arts — plays a big role in inspiring the artist’s works, especially in his painting Lorenzo the Magnificent , who sports a Cubist face and a hairstyle that almost mimics the shape of clouds in the sky.

Gaston is flighty with inspirations for his narratives with an Australian Aboriginal myth illustrated in one piece, or the portrait of an Italian statesman from the Renaissance in another. For his newest paintings, specific poems that piqued his interest are used as the diving board to start a new narration.

The Second Coming is born from the poem of the same name by William Butler Yeats. The poem, affixed to the wall next to the painting, acts as a descriptor for the visual story. An expressionless sphinx — being heckled by three birds — slowly creeps across the white, confetti-filled desert, which corresponds with the last few lines of the poem: And what rough beast, its house come round at last/ Slouches towards Bethlehem to be born?

You can easily see his 15 years of experience in graphic design at play in his paintings with their thick, bold outlines, painted patterns and bright color choices. Yet, he also breaks from the strictly two-dimensional elements of design with his deep love for curiously exploring surface quality.

One of my favorites in the show is Leaping Krakatoa, a highly textural painting depicting a white figure with three comically spindly legs balancing on what looks like a martini olive (it’s actually supposed to be the famous Indonesian volcano, Krakatoa). Though the little guy isn’t doing any leaping at the moment, his inflated parachute infers a quick escape before things get blasty. In a strange twist of fiery fate, this painting happened to be one of the only paintings Gaston was able to salvage from a fire that engulfed his studio in 2007, where he lost 50 pieces.

The most compelling pieces are when the obvious cultural appropriation is at a minimum, like in Gentle Giant where assertive dry-brush strokes and splatters of ink are made on paper. Still left with traces of outside influences, there is more of Gaston’s personal mark left on this piece. Depending on how you look at it, you either see a figure standing on the mountaintops with arms raised in the air, or the bust of a long-faced, pointy-shouldered man with a strange nose that wraps around his head upwards. Playful, bulbous lines that depict this gentle giant express Gaston’s sense of humor in creating these characters. 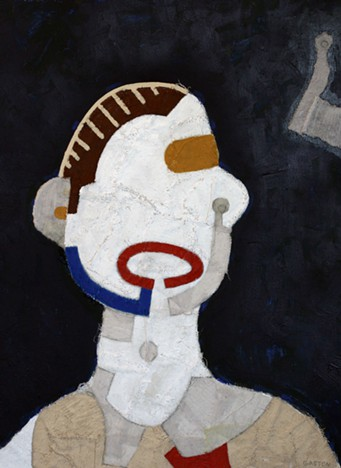 There’s a somewhat formulaic approach to the compositions, with a centrally positioned figure or bust facing the viewer in each of the 14 paintings on view. The paintings are less connected by a singular thought or narrative, and are mainly linked by Gaston’s distinct painting style.

Conceptually, the most interesting piece is Desperado, with a blood-red, hastily sketched in figure encircled by a dimensional black square. Gaston explained during his art reception that this piece was created around the time when there was a lot of buzz around the “Stand Your Ground” law. The man looks like he’s holding a weapon up, ready to fire. The black square seems to represent crime scene tape, and even the blocky grid of a lighter shade of ochre surrounding the figure seems to act like a chalk outline.

Though the show is certainly a feast for the eye, I wish there was a central theme that Gaston focused on in more depth to tie everything together, or have all of the works created from chosen poems like he did for his newest pieces. Instead the show seemed a sampling of cultural styles, myths, and stories from across the board.

On the other hand, artists aren’t always able to—or should have to—justify every little thing they’re doing. Gaston says, “Isn’t that part of art? That we can’t understand everything, that we can’t explain everything. That’s one of the things that I really appreciate and love about art is the mystery of it.”