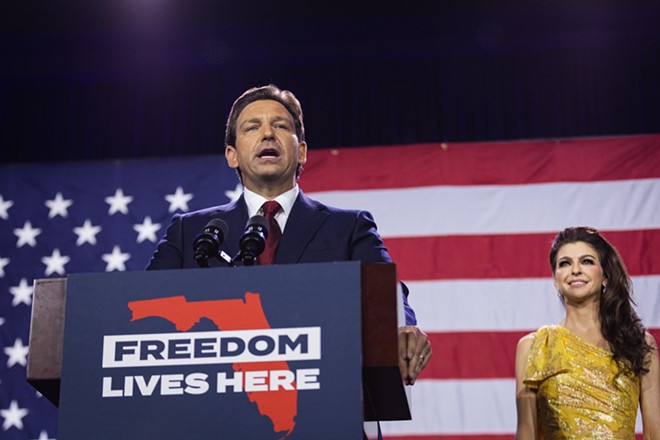 Photo by Dave Decker
DeSantis first rose to prominence in conservative circles for his gaslighting and defiance of public health guidance during the early COVID pandemic.
“I wanted this to happen.”

That was the explanation Larry Keefe, a Republican political hack working for Florida Gov. Ron DeSantis, offered in federal court when asked why he doggedly pushed for the suspension of Andrew Warren, the district attorney of Hillsborough County.

There was no justification for Warren’s suspension, U.S. District Court Judge Robert Hinkle ruled last week. He hadn’t violated any law or ethical norm. He never demonstrated incompetence or neglected his duty as a prosecutor. He did not—as DeSantis falsely alleged in his Aug. 4, 2022, order suspending Warren—have “blanket” nonprosecution policies.

“[Warren] never said he would not prosecute a case that absolutely deserved to be prosecuted. Quite the contrary,” Hinkle wrote. “He said repeatedly that discretion would be exercised at every stage of every case.”

Though Hinkle said that DeSantis violated both the federal and state constitutions, the judge dismissed Warren’s lawsuit on what amounted to technicalities. In part, DeSantis won because he operated in bad faith. Hinkle ultimately ruled that while the suspension clearly violated Warren’s First Amendment rights, the alleged reasons for the suspension were pretextual.

Keefe admitted that suspending Warren was the result of a “project,” not an “investigation.” Evidence produced in Warren’s lawsuit showed that DeSantis wanted to target a “reform prosecutor.” Keefe picked Warren after a Google search and a chat with a right-wing sheriff. Drafts of the suspension order—written before DeSantis’ lawyers tried to sanitize it—faulted Warren, a Democrat, for taking money from (wait for it) the Democratic Party.

“Soros has supported Warren and other ‘progressive prosecutors’ through a series of shell organizations, affiliates and pass-through entities, including the Democratic Party,” the draft added.

“There it was, stripped of pretext: a motivating factor in Mr. Warren’s suspension was that he was a ‘progressive prosecutor,’ Hinkle wrote. “He was being supported by a contributor to, of all things, the Democratic Party.”

Seeking to curry favor with the far right, DeSantis appeared on Tucker Carlson’s White Power Hour the night he suspended Warren. He later refused to testify under oath.

It should go without saying that Warren is an elected official: that the voters of Hillsborough County knew that Warren was a progressive when they elected him, that DeSantis brazenly disregarded them for no reason other than to further his political ambitions.

Even DeSantis’ predecessor, Rick Scott, himself a pustulant boil on the ass of democracy, wasn’t so cavalier. When Orange County voters dared to elect a progressive prosecutor who pledged never to seek the death penalty, Scott merely stripped her office of potential capital cases; he didn’t try to remove her from office.

This window into DeSantis’ callous mindset is worth keeping in mind as he pivots to an expected presidential run in the coming months—and as MAGA operatives try to turn him into Trump Without the Baggage.

The former president’s luster might be tarnished by the insurrection he inspired, the criminal investigations he’s hoping to survive, and most importantly, the massive losses his endorsed candidates suffered in November. But DeSantis is no less craven or cynical; as Florida’s governor attempts to emerge from his former benefactor’s shadow, with the far right desperate to find a new, unsullied champion, he might be more dangerous.

DeSantis, of course, first rose to prominence in conservative circles for his gaslighting and defiance of public health guidance during the early COVID pandemic. Last week, he went back to the conspiracy theory well, proclaiming that “almost every study” showed that people who receive boosters are “more likely” to get COVID. (I hope this is self-evident, but DeSantis is either lying or dumb as a rock.)

But perhaps his main claim to fame is as an avid opponent of anything and everything that he considers “woke,” a word so expansive that it now includes Black history. His administration announced that it will block Advanced Placement classes in African American studies, alleging that the course violates some unspecified state law and is, somehow, historically inaccurate.

Florida allows high school students to take AP classes in European history, naturally. But under legislation DeSantis signed into law, it does not allow teachers to discuss material that might make white kids feel bad. (Also under that law, the school system in Jacksonville is currently reviewing whether “Roberto Clemente: Pride of the Pittsburgh Pirates” is too controversial for young minds.)

DeSantis invented a “crisis” of “woke” indoctrination, then “fixed” it by rescuing white children from the scourge of learning about the shitty things their ancestors did—and how those shitty things created the modern world—so as to anoint himself a culture war Napoleon. He similarly invented the crisis of a progressive prosecutor because, as Keefe put it, he “wanted” to.

As the right tries to whitewash DeSantis for a national audience, remember that this is who he really is: The guy who removed a democratically elected prosecutor because, as Keefe put it, he “wanted” to. The guy who literally flew migrants to Florida from Texas so that he could then deport them to Massachusetts to win points on Fox News.