The measure will require the State Board of Education to adopt the new standards by April 2023. 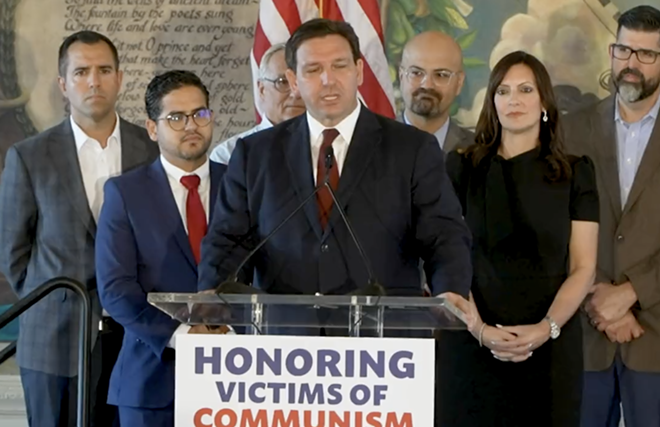 Screengrab via DeSantis/Twitter
Calling it a “blockbuster day for freedom,” Gov. Ron DeSantis on Monday signed a bill that will require public-school students to observe “Victims of Communism Day” on Nov. 7 each year.

The new law, which went into effect immediately, describes the day as being geared toward “honoring the 100 million people who have fallen victim to communist regimes” across the world.

The law also gives DeSantis authority to extend observance of the day beyond public schools, as it requires that Victims of Communism Day “be suitably observed by public exercise in the State Capitol and elsewhere as the governor may designate.”

DeSantis signed the measure (HB 395) at the Freedom Tower in Miami, where Cuban refugees who fled to South Florida in the 1960s were processed as they arrived in the United States.

“We want to make sure that every year folks in Florida, but particularly our students, will learn about the evils of communism. The dictators that have led communist regimes and the hundreds of millions of individuals who suffered and continue to suffer under the weight of this discredited ideology,” DeSantis said, adding that “a lot of young people don’t really know that much” about the political ideology.


Today, I established November 7th as Victims of Communism Day to honor those who have suffered under communism and remind people of the destruction communism has caused worldwide, including a death toll exceeding 100 million.

In Florida, we will tell the truth about communism. pic.twitter.com/Ojlao8f46t

Under the law, a curriculum about various communist regimes throughout history and their leaders will be added to high school U.S. government courses. At least 45 minutes of required Victims of Communism Day instruction will be added during the 2023-2024 school year.

The measure will require the State Board of Education to adopt the new standards by April 2023.

The added requirement is a continuation of efforts by DeSantis and lawmakers to condemn communism through education.

Last summer, DeSantis signed a bill that revised social-studies requirements for high-school graduation to include in U.S. government courses “a comparative discussion of political ideologies, such as communism and totalitarianism, that conflict with the principles of freedom and democracy essential to the founding principles of the United States.”

DeSantis was joined at the bill-signing event by Republican lawmakers including the state’s incoming education commissioner, Sen. Manny Diaz, Jr., a Hialeah Republican who will begin the education job June 1.

“It is our job to make sure that this tower (the Freedom Tower) stands, that the lessons stand for next generations so they understand the value of freedom and the perils of communism,” Diaz said.

DeSantis also announced Monday that he will approve $25 million in the state budget for the upcoming fiscal year for renovations to the tower. Lawmakers approved the budget for the 2022-2023 fiscal year in March but have not formally sent it to DeSantis, who has line-item veto power.

DeSantis went to the tower on Nov. 15 to pitch restoration work for the nearly 100-year-old building, which Diaz on Monday told the Miami crowd is “our Ellis Island.”

The governor also signed a bill (SB 160) that will place designation markers on Florida roads honoring prominent figures, including three named after Cuban people who fought against the Castro regime.