Eliminating the filibuster is a wolf move, but Senate Democrats are more prey than predator 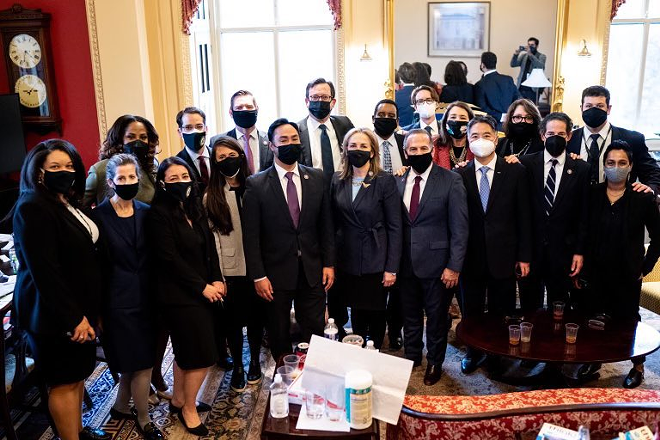 I wanted to ignore Donald Trump’s impeachment trial. It would be a low-rent, low-stakes sequel whose ending was obvious from the opening credits, I assumed.

I was mostly correct.

The evidence of Trump’s guilt was undeniable and irrefutable. So was the cowardice of the Republican minority that would inevitably acquit him. It didn’t matter how compelling the House managers’ case was or how harrowingly dramatic their presentation. Republicans would find an excuse—a half-assed complaint about the process rather than the merits of Trump’s actions— just as they’d done 13 months ago during the first impeachment trial.

This time, the twofold, self-contradictory excuse went like so: 1) The trial was unconstitutional because Trump is now a “private citizen.” 2) The House improperly rushed Trump’s impeachment before he left office.

Needless to say, these aren’t serious arguments. (Democrats were supposed to move more slowly through impeachment, but try Trump faster? Or does impeachment not apply to the last month of a president’s term?) They’re not intended to be. They exist not to convince but to provide cover. The calculation was transparently cynical: don’t offend Trump’s supporters (you’ll lose votes), but don’t endorse Trump’s rhetoric (you’ll lose funders).

No one embodied this cynicism better than Sith lord Mitch McConnell, who, after voting to acquit the former president, made an effective case for Trump’s conviction.

“American citizens attacked their own government. They used terrorism to try to stop a specific piece of democratic business they did not like,” the minority leader said. “… They did this because they had been fed wild falsehoods by the most powerful man on earth—because he was angry he’d lost an election.”

He voted to acquit, McConnell continued, “because former President Trump is constitutionally not eligible for conviction. There is no doubt this is a very close question. Donald Trump was the president when the House voted [on Jan. 13], though not when the House chose to deliver the [impeachment] papers.”

Not mentioned: McConnell, then majority leader, refused to recall the Senate from its recess to try Trump before Joe Biden’s inauguration.

There’s nothing particularly interesting about McConnell’s well-documented duplicity or amoral lust for power. Nor is there anything novel about the thin reeds Republicans grasped at to project intellectual coherence while bending the knee to MAGA. Writing about conservative politics in the Trump era is like listening to an AC/DC record: the details change, but the song is basically the same.
Still, two surprises happened on Saturday that lent drama to the fait accompli.

The first was the House managers’ decision to call witnesses—which the Senate agreed to, then Democrats capitulated on in exchange for nothing. Specifically, House managers wanted to call a Republican congresswoman who issued a statement corroborating a CNN story about a phone call between Trump and House Minority Leader Kevin McCarthy in which Trump refused to call off the rioters during the insurrection.

The testimony might not have changed Republican votes, but it would have increased the political price of acquittal. Trump’s lawyers knew this. So did Senate Republicans, who threatened to drag out the trial for weeks. Democrats could have called their bluff. Instead, they caved. Like kindergarteners, they wanted their recess. Or, as Sen. Chris Coons reportedly told House managers, “People want to get home for Valentine’s Day.”

It was an own goal for the ages.

As House manager Rep. Jamie Raskin, the star of the trial, put it: “If you make yourself a sheep, the wolves will eat you.”

Democrats were perhaps saved from their own fecklessness by surprise no. 2: Seven Republicans voted to convict Trump, making this the most bipartisan impeachment trial in history.

Most were predictable: Sen. Mitt Romney of Utah voted to convict Trump a year ago. Sens. Ben Sasse of Nebraska and Pat Toomey of Pennsylvania condemned Trump after the Jan. 6 riot, and Sen. Lisa Murkowski of Alaska demanded his resignation. They and Sen. Susan Collins of Maine rejected a Republican motion in late January to declare the trial unconstitutional.

Applaud them for swimming against the tide. But they weren’t jumping on a live grenade. Burr and Toomey are retiring. Cassidy and Collins won’t face reelection until 2026. Neither will Sasse, though he might seek the GOP’s presidential nomination by carving out an anti-MAGA lane. If Romney runs in 2024, he’ll need Utah’s independents and Democrats. Murkowski is up next year, but Alaska’s new ranked-choice system means she doesn’t have to cater to the MAGA crowd.

It goes without saying that the half-dozen other Republicans with purported presidential aspirations obsequiously backed Trump. State parties in Nebraska, Louisiana, and North Carolina denounced their treacherous senators. Trump allies in the House lashed out at McConnell. And Trump bootlicker Lindsey Graham announced that Burr’s vote made Trump’s daughter-in-law Lara Trump the favorite to replace Burr—never mind her lack of qualifications or New York residency—which must be unhappy news to far-right candidate Mark Walker, who’d already condemned Burr.

These are the outlines of the forthcoming power struggle: Trump will insert himself into primaries to reward loyalists and punish adversaries. McConnell will try to hold back a flood of fringe candidates while keeping his caucus together by refocusing their enmity on the Democrats’ agenda. His tightrope act will allow no room for compromise.

Herein lies a lesson Democrats would be foolish not to learn: Though Trump’s culpability was never in dispute, Democrats couldn’t muster 60 votes to convict him. How do they expect to overcome a filibuster on anything substantial?

Of course, eliminating the filibuster is a wolf move, and Senate Democrats are more comfortable being prey than predator.