Dorian expected to be a major hurricane, coastal Floridians should prepare

Coastal residents should "not focus on the exact forecast track of Dorian's center." 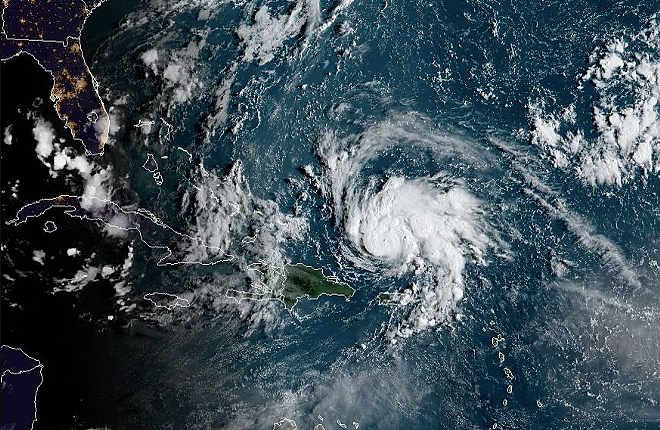 NOAA and other weather agencies now consider Hurricane Dorian nearly certain to impact Florida, and are warning coastal residents to prepare for hurricane-force winds and storm surges, no matter the exact path the storm takes.

A 5 a.m. advisory post from the National Hurricane Center in Miami on Thursday gives a better idea of the confidence meteorologists have in predicting the storm's path.

"Confidence in the track forecast is fairly high for the first 48 hours," it says, with Dorian "expected to continue moving northwestward and then begin to turn west-northwestward."

"The models, and their ensembles, continue to diverge after 48 hours and have not really budged from their respective solutions compared to yesterday," it continues, before describing what different hurricane forecasting models are predicting.

The NHC did not release an 8 a.m. update.

As of now, Dorian is a Category 1 hurricane and is expected to reach near Category 4 strength as it tracks towards Florida early next week, says forecasters.

The NHC post gives two important takeaways about Dorian. One, no matter what, Florida and the Bahamas can expect heavy rains late this week and into early next week. The other is that "the risk of dangerous storm surge and hurricane-force winds" continues to increase for Florida, "although it is too soon to determine where these hazards will occur." 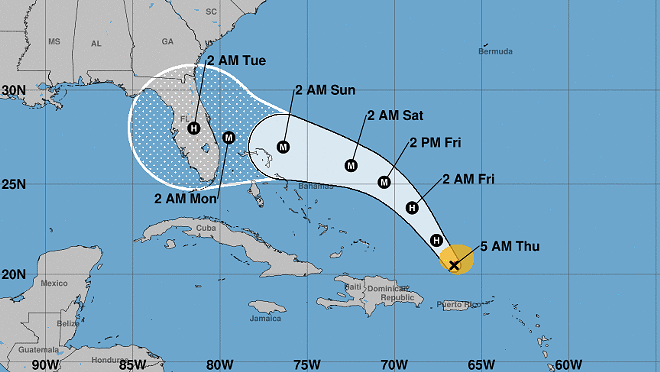 That means coastal residents need to have a hurricane plan in place, "and not focus on the exact forecast track of Dorian's center."

One forecasting model, the GFS, is considered "a northern outlier from the rest of the guidance," shows "a weaker ridge and bringing Dorian close to the Florida/Georgia border." Two other forecasting models, the UKMET and ECMWF, show "stronger ridges and remain the southernmost solutions near South Florida."

The most notable change in the new forecast is that Dorian is a "little bit slower" than previous forecasts. "Dorian is likely to reach major hurricane strength in the next day or two and is forecast to maintain that status until it reaches land."

As of early Thursday, Dorian is located roughly 150 miles north-northwest of Puerto Rico and about 425 miles east-southeast of the Bahamas.


Yesterday, Florida Gov. Ron DeSantis declared a state of emergency for counties in the path of Hurricane Dorian.

“It’s important for Floridians on the East Coast to monitor this storm closely," said DeSantis in a statement. “Every Florida resident should have seven days of supplies, including food, water and medicine, and should have a plan in case of disaster.”

“Because of the uncertainty in the track of this storm, every resident along the East Coast needs to be ready,” Florida Division of Emergency Management Director Jared Moskowitz said in the release.