Fear and lusting in Las Vegas


I get questions like this often. True, my wife accepts my job in a way most women wouldn't. However, such questions assume that while I'm out covering adult events, my wife is waiting patiently at home for my return. This assumption is incorrect.

Marie McCray: If you're in an open relationship you must be 100 percent honest. Honesty and communication and loyalty. You must make sure your partner knows you will stick with him or her no matter what.

On the road to Vegas, I stopped in an area of west Texas where there are more oil rigs than houses. It was my first time in a federal prison. I stayed for hours, visiting a friend. The last time I saw him was several years before in Vegas, months before he was arrested for being a bit too liberal with his sext messages. He has big plans for when he's released in five years. He will meet and marry a model who is cool with throwing a third woman in the mix from time to time. He obviously had spent a lot of time contemplating the ideal relationship. He asked how married life was.


Given the context, any other answer seemed absurd.


Adrianna Luna: Well, I mean, every now and then, if we were out and drinking around other people who are hyper-sexual, then yeah, we’d probably throw someone in the mix, but we would do it together.

As I strolled down the strip, I made a conscious effort to appear more confident. I maintained eye contact with women who intimidated me, held the connection for one second, then broke into a smirk. For my efforts I received the slight ego bump of a few returned smiles. Then it happened. A woman walked straight up to me and asked, "You want some company tonight?"

What I find unsavory about prostitutes isn't their promiscuity. I just crave the validation of a beautiful stranger who willingly wants to sleep with me because she finds something about me, beyond the contents of my wallet, irresistible.

I sat in the press room interviewing Mia Leilani. Something about my line of questioning prompted a guy near us to ask, "Are you writing a book on love?"

My golden rule when it comes to flirting is to position yourself near the person you want to meet. This is how I met my wife, and this is how I showed her to meet guys at bars for her single friends.


I employed the same tactic while alone at the AEE Kickoff Party at Chateau Nightclub. I leaned heavily on the bar to order a $9 Bud Light next to a group of women celebrating a birthday. They did not realize this was a porn party. All the industry people were secluded at tables behind velvet ropes while all the fans were crowded in the dance pit and around the bar. Vegas is one of those places like LA, Miami, or New York were the connection between money and meeting women is transparent. Men buy bottle service and bouncers bring women to their table. Money buys an introduction.


Eventually, I worked through the group until I was chatting with my intended target. She made a conscious effort to avoid the topic of relationships and her wedding ring. When her friends decided to leave, she lingered behind long enough to get my number. I gave it to her knowing she would not call. Like me, she was the type who got off on just knowing that she was desired.

As I parked back at Treasure Island, I received a text from my last interview subject:


It took me an hour to find my way back to Treasure Island. My elevated state didn't prompt any spurts of creativity, nor did it lead me into any Fear and Loathing in Las Vegas scenarios. It only intensified my desires: my hunger, my thirst, and my need to be safely in a room, holding a soft, warm woman — or at least a sympathetic pillow.

I pretend I'm bi-polar because of the link between mania and creativity. My wife named my two personalities: "Waxing Shawn" and "Waning Shawn." These shifts are usually triggered by some form of validation or rejection, often from the opposite sex. My wife finds this discouraging, though she neglects to see that her approval or denial holds more weight than anyone else of the opposite sex.

Dana Vespoli: We were together for seven years and we have children. We are no longer together, but we are really good friends. We work together quite a bit. Not performing together but I shoot him in scenes. He has shot me in scenes ... We're a little codependent. I think that happens sometimes by virtue of having been together so long ...

Lelu Love flirted with the bouncers at Body English in order to get me in the club for free. I then spent the majority of the night hanging out in a back booth with her partner B. The couple could serve as the model for how to effectively mix business with pleasure. They run a successful webcam site. B handles the technical side and fills in as stunt cock while Lelu is the object of desire. Off camera they are just as inseparable, though B always secludes himself in a back booth during these adult events while Lelu makes connections with other sex industry entrepreneurs.


"Why do you never bring your wife to these events?" Lelu asked.


I have a number of answers for this question, none of which are very convincing.

I was chatting with a woman at the bar while we waited to order when a guy pushed in front of us and started harassing the bartender.


“Who's that assclown?” I asked the woman.


She didn't hear my question. She had already figured out who the assclown was. It was Pauly Shore. Instead of being angry that he weaseled in front of us, she threw her arms around him without arousing any malice from the two women he was seemingly buying drinks for. This was my first, firsthand experience with the power of fame as a weapon of mass seduction. Jealousy seeped through my veins like the alcohol I should have been drinking.

Back on the strip alone, I walked through waves of women holding their heels in their hands as they stumbled barefoot over a carpet of x-rated flyers. I chatted up a woman at a crosswalk. Her name was Britney. She was visiting her grandfather and came out alone to see the city. She said we should hang out. We dipped into Caesars so I could get a fresh beer and so she could use the bathroom. Although Britney claimed this was her first time in Vegas, she knew exactly where the nearest bathroom in Caesars was. When she disappeared behind the door, I walked away, though not nearly as fast as I should have.

We were the absolute cream of the national press, assaulting the red carpet at the AVNs with a lighting storm of camera flashes.


"What are you wearing beneath your dress?" the photographer beside me repeatedly yelled at the performers. "I can't see your panty line."


The ultimate, undeniable truth is that porn's appeal is visceral. Any attempt to intellectualize sexual desire inherently misses the point.

The moment I walked into the AVN Awards at The Joint, I was overwhelmed by Katie Summers and her new tits.


Her first question was, “How is married life?”


My first question was, "What are you doing after the show?"

I skipped the AVN after parties to join the ranks of the vanilla crowds strolling the strip. I dodged the single women and focused on entertaining birthdays and bachlorette parties. I made a few forgettable friends over a few shots I wish were just as forgettable. On my way out of Caesars, I caught the eye of a woman leading her three friends into the casino. She grabbed my arm and escorted me to the nightclub, Pure. The women went in ahead of me. The cashier stopped me with a $30 toll. I turned, and headed back the way I came.

Dana Vespoli: I think Sartre said that love that is possessive and excludes all others is ultimately detrimental.

I arrived home at about 6 a.m. Just as I crawled into bed, my wife crawled out to get ready for work. In my absence she made a number of changes to our one-bedroom apartment, most of which involved shrubberies. We had an argument about shrubberies that had nothing to do with shrubberies. Eventually, our anger dissolved into compassion. She put off work to lie with me in bed until I fell asleep.

When I woke at 5 p.m., it was to my wife crawling back in bed. We proceeded to have the best sex of our marriage. Some would call it makeup sex. I have no idea what I would call it, or even what the act signified about us as a couple. Love, jealousy, desire — all human emotions confound logic.

See more explicit coverage of the convention and awards show at AVNAwards.com and AdultEntertainmentExpo.com. 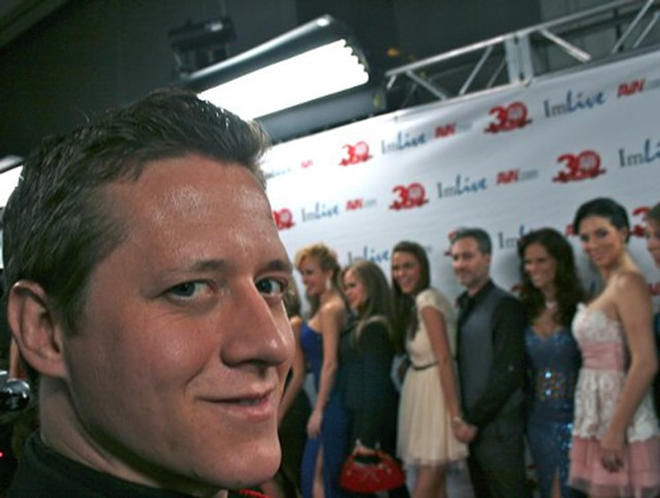 Spiderman and Batman bummed around Las Vegas Boulevard, smoking cigarettes and hassling tourists. Three different black men asked what I needed — if I was good — as they rustled cellophane bags in their pockets. Two white guys sat blocks apart, holding cardboard signs that read, “Kick me in the nuts, $20.” Contingents of Hispanics in neon shirts descended on me at every intersection, offering pictures of call girls.

From a distance, Las Vegas is a mirage, rising up like a city of gold in the heart of the desert. Such excess begs the question: What resource has this modern boomtown unearthed? What exactly is Vegas selling to the millions who visit each year?

This was the fourth road trip I had taken to the West Coast that ended with a stop in Vegas. I always save the city for last because it has a way of draining me completely; my first visit culminated with me in a Clark County emergency room with an IV replacing what I had spent the last two days vomiting up in a back-alley motel.