Medicaid is jointly funded by the federal and state governments and provides care to low-income people. 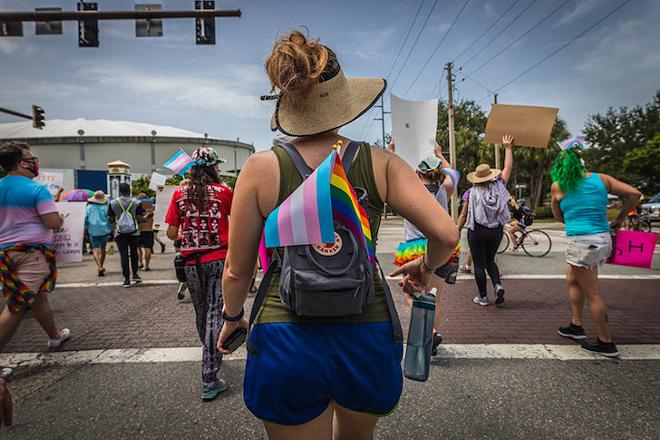 Dave Decker
A protester marches with the trans and pride flag in St. Petersburg, Florida on June 28, 2020.
A legal fight is looming over a state rule taking effect Sunday that will end Medicaid reimbursements for transgender care such as puberty blockers, hormone therapy and gender-reassignment surgery.

Attorneys representing individuals and groups plan to file a federal lawsuit challenging the rule, people involved in the anticipated case said in interviews this week.

The Agency for Health Care Administration, which largely oversees the Medicaid program, proposed the rule this summer, drawing intense pushback from the LGBTQ community, many medical groups and doctors who treat people with gender dysphoria. The federal government defines gender dysphoria as clinically “significant distress that a person may feel when sex or gender assigned at birth is not the same as their identity.”

Under the agency’s rule, the Medicaid program will not cover puberty-blocking medication, hormones and hormone “antagonists,” sex-reassignment surgeries and any “other procedures that alter primary or secondary sexual characteristics.” The prohibition on reimbursements will apply to youths and adults seeking such treatments.

The rule also will say that gender-affirming treatments don’t meet a definition of “medical necessity.” That is important because, by law, services provided in the Medicaid program must be deemed medically necessary.

Under the rule, reimbursements to medical providers will continue for people who have been authorized for treatment until the current authorizations expire.

Michael Haller, a professor and chief of pediatric endocrinology at the University of Florida, said this week that he and other doctors are “working as quickly as possible to ensure patients have authorizations in place” before the rule goes into effect.

Patients already getting treatment will be able to continue receiving medications until their authorizations expire, “but my understanding is that anybody who needs a new authorization come next Monday, is going to be denied,” Haller said.

“It’s a particularly cruel and unusual punishment. Imagine someone coming up to the end of their authorization next week who has been on a blocker for nearly a year being told they no longer have coverage.” Haller told The News Service of Florida in a phone interview.

Simone Chriss, director of the Trans Rights Initiative at Southern Legal Counsel, is among the lawyers who intend to ask a federal judge to block the rule.

“There’s really no room to play around with something this awful,” she said in a phone interview Thursday.

Medicaid is jointly funded by the federal and state governments and provides care to low-income people. The rule “violates a number of laws,” according to Chriss, such as certain provisions of the federal Medicaid Act, the Affordable Care Act and equal-protection rights guaranteed in the U.S. Constitution.

“The exact same hormones, prescriptions, surgeries, procedures, the exact same treatment and care are available to cisgender people for a number of reasons. So to carve transgender people or people with gender dysphoria out from care that is available to everyone else for any other reason as medically necessary is blatant discrimination on the basis of sex, and there’s no way around that,” Chriss said.

The Medicaid rule is among a number of policies Gov. Ron DeSantis, his administration and state lawmakers have embraced targeting trans people.

The Florida Board of Medicine, at the behest of the state Department of Health, is exploring a rule that would ban doctors from providing gender-affirming care, such as puberty blockers, hormone therapy and surgery, to youths.

And DeSantis this spring signed a law, which critics disparagingly dubbed the “don’t say gay” bill, to restrict how teachers can discuss gender identity and sexual orientation in schools. That law has drawn federal-court challenges.

The state’s moves are in keeping with actions taken by Republicans across the country. As his political presence on the national stage continues to build, DeSantis, who is seeking re-election in November, contends that children are prematurely being allowed to pursue treatments that can have harmful lasting effects.

As an example, DeSantis this month called for doctors who provide gender-affirming surgeries to young people to be sued.

“You don’t disfigure 10-, 12-, 13-year-old kids based on gender dysphoria,” DeSantis said. “Eighty percent of it resolves anyways by the time they get older. So why would you be doing this? I think these doctors need to get sued for what’s happening, I’m sorry.”

Haller and other physicians maintain that what are known as “top” and “bottom” surgeries on such things as breasts are rarely conducted on minors. The widely accepted current standard of care for such procedures is a minimum age of 16 for top surgery and 18 for bottom surgery.

Critics accuse DeSantis of using the issue to score political points. "This is nothing more than a political pile-on. There’s no reason to focus on this small and already marginalized population other than for political purposes. The suggestion that this is being done to protect children’s health and do what’s best for families and kids is disingenuous. This is very clearly a culture war being used to support the political aspirations of state leadership" Haller said.