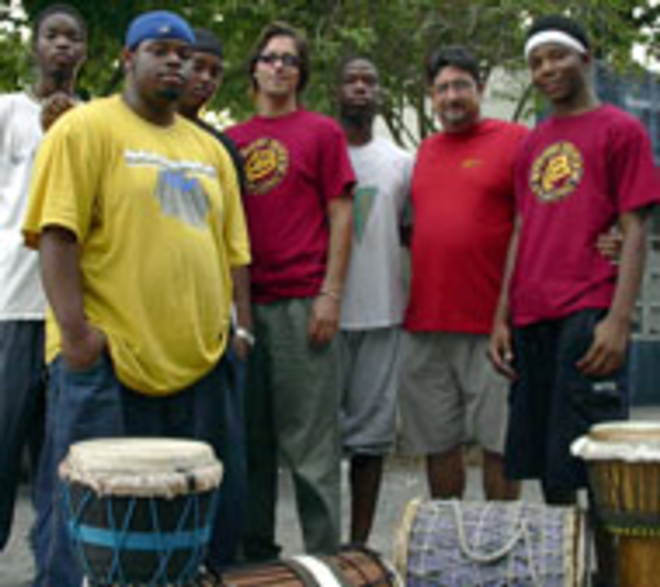 A majority of the target audience most American major labels see as the only group worth courting couldn't give two shits about world beat music. Ostensibly, the notion is that it requires too much effort to be effortlessly entertaining, that only Humanities professors, former cultural revolutionaries with a guilt complex over opting out of the Peace Corps and yuppies in desperate need of a new affectation get off on it. That it's too didactic, too much of a learning experience to be truly enjoyable.

In short, that it isn't any fun.

And there are certain grains of truth to that stereotype. Like when some guy's talking at length about how a certain Malaysian drum is painstakingly crafted — so loud you can't hear the drum itself — and all you want him to do is sell your buddy a bag, already, so you can get back in the car and crank that Faith No More mix-tape you found in a box of old stuff.

But such is not always the case. Take self-described Bay area "culture pop" ensemble Cold Joon, whose new disc smelts African tribal rhythms to funk, pop hooks and unselfconscious joy in an engaging way. Gnu and Improovd's first single, "Buzz On," mixes a reggae groove, lenjen rhythm and lyrical madcappery to utterly memory-adhesive effect. "You got your buzz on, you're goin' to Home Depot," the chorus exclaims, introducing a tale of hitting the home-improvement warehouse after dark and in an elevated state. Not a chemically induced one, however, as it turns out — the writer was riding a high produced by a particularly satisfying drum rehearsal.

"I just think that I realized such a small percentage really appreciate [world beat]," says percussionist and songwriter Tom Blauvelt of Cold Joon's amalgam of reverence and revelry, "and I wanted to expose it to a larger group of people."

Cold Joon is not a new act. In fact, its roots can be traced back more than a decade, to the founding of St. Petersburg percussion and dance troupe Dundu Dole by Blauvelt and fellow Afrophile Jai Hinson. Bringing traditional tribal rhythm and dance from West African locales such as Guinea and Senegal to venues all over America, the still-active Dundu Dole has logged more than 2,000 performances over the course of 13 years. The first, self-titled Cold Joon album appeared eight years ago, the result of Blauvelt's desire to combine the troupe's enthralling visual and rhythmic elements in a more familiar live-band setting.

Circa '95, Cold Joon was much more rigidly defined by Dundu Dole's emphasis on showcasing ethnic traditions and cultures far removed from our own. (Read: the first album was way world beat-y.) As the project evolved, new blood in the dance troupe, different musicians' perspectives and the sort of identity development that earmarks worthwhile creative teams saw Cold Joon constantly morphing and taking on new influences. Blauvelt eventually committed to the idea of crafting a new album that kept the spirit of Dundu Dole intact, yet incorporated inspiration from pop to R&B to hip-hop.

"We were definitely excited," says Dundu Dole veteran and Cold Joon vocalist/percussionist Abraham Miller. "When Tom came up with the concept, we were behind him all the way. And it didn't hurt that the songs sounded good."

The resulting Gnu and Improovd is suffused with a love for the African rhythms and instrumentation that make a Dundu Dole performance such an intriguing event. Yet it's also shot through with Caribbean grooves, skanking guitars, singable choruses and humor. There's a sense of celebration and lack of pretense here that could draw in fans of any musical style, turning them on to the uniting elements of world music rather than turning them off to its studied cachet.

A dozen musicians and a dozen more vocalists, including noted African jimbe drummer Malik Sow and well-known Bay area world-beat authority Jim Beckwith, contributed to both the album's musical excellence and party vibe. Each undoubtedly brought something unique to the project, and while Cold Joon's principals acknowledge that they're definitely making a departure from simply trying to bring one world's style to another, they're secure in the belief that what they do is no less pure.

"I don't think it's a conscious effort to be anything other than what it is," says bassist Ray "Rayzilla" Villadonga, who also co-hosts WMNF's Wednesday-night experimental-music program "A Step Outside." "The music is true to how it comes through us.

"Everything you see today is a combination of different idioms. We're not Africans, and the whole vibe comes from that [fact]. We're representative of what we are, not something else."

For all its dance-instigating beats, spectacle (the group never performs without a small battalion of Dundu Dole's drummers and dancers) and uplifting sense of fun, Cold Joon is far from just an interesting trifle. Many of the band's tunes carry a serious, if humorously presented, sense of political criticism. And that charged sense of sacred rite that permeates all original peoples' music is heightened by Blauvelt's frequent lyrical references to Jesus — though, as with the political stuff, it's always delivered with a playful and guileless hand.

"I feel like I have to [put forth] some serious concept of spirituality," says Blauvelt, "but I also almost feel like a person's spirituality should be private. On the other hand," he adds with a slight smile, "I think I have to represent for Him. He's gotten some bad P.R. in the past, some of the things that have gone down in His name."

Listeners may take Cold Joon's theological and political themes any way they choose, but they by all means should take a listen, or take in a show. Both Gnu and Improovd and the band's live exhibition are guaranteed party-starters and should serve to change any number of minds on the subject of world beat.

"It's absolutely natural. We're alchemists at heart. We try to keep the purity and spirituality, but filtered through our [contemporary] thought process," says Villadonga. "And I think it's proven that it does resonate. When we look out into the audience, it's just a sea of smiles."