While DeSantis said he was “happy” in progress made, he remains “disappointed” in the website’s performance. 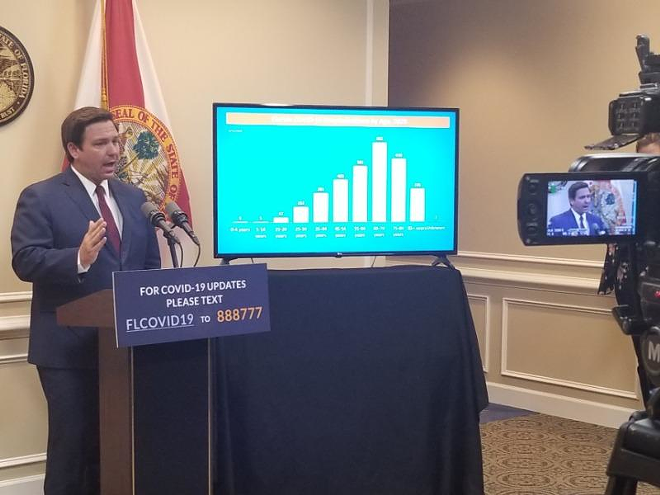 Gov. Ron DeSantis on Wednesday shook up oversight of the state’s unemployment-compensation system, which has struggled with a massive surge in applications because of economic fallout from the novel coronavirus.

“His mission is very simple, get assistance out and as quickly as you can,” DeSantis said of Satter.

DeSantis added that he hopes Satter will “rattle the cage,” as the unemployment system continues to draw complaints as record numbers of claims have poured in during the past month. DeSantis said he has been unable to get updated information he wants.

“I’d like to be able to come out and say X number of checks went out yesterday. X number of checks are going to go out by 5 o’clock, or whatever you have,” DeSantis said. “I don’t think that the response has been sufficient, in that regard.”

Last Thursday, DeSantis said 225,755 initial claims had been filed since the previous Sunday, putting the state on pace to top the record 228,484 claims filed during the week ending March 28. Updated numbers were not available Wednesday.

Neither Satter nor Lawson attended Wednesday’s media briefing with DeSantis.

Lawson remains as head of the Department of Economic Opportunity, just in a role that is “non-COVID-related,” DeSantis said.

Lawson, who was appointed by DeSantis to head the department in December 2018, led agencies under former Gov. Rick Scott, moving from the Department of Business and Professional Regulation to Visit Florida. He headed the tourism-marketing agency as its spending was under fire from House leaders.

While DeSantis said he was “happy” in progress made to improve the online unemployment-application system, he remains “disappointed” in the website’s performance. Applicants have had difficulty filing claims, complaining about issues such as the system crashing.

The CONNECT system, which cost $77 million to get online in 2013, has been a subject of several critical reviews by the Florida auditor general, with the latest in 2019.

“I think he’s a logical person to be able to do it, given that he’s been so involved in the technical components so far,” DeSantis said.

Responding to the change, state Sen. Janet Cruz, D-Tampa, tweeted, “I hope this change will bring immediate relief to my constituents and all Floridians suffering with Florida's broken unemployment system.”

Satter has been instrumental in getting more than 100 computer servers to increase the capacity of the system. Problems with the system have spurred the state to begin offering paper applications and to bring in more than 1,000 people to handle calls from people filing claims.

Satter was managing director of U.S. operations for the commercial real-estate firm Avison Young from 2013 to 2018 before DeSantis appointed him to run the Department of Management Services, which oversees a wide range of issues including information technology.

Former Gov. Jeb Bush twice named Satter to the Health Care District of Palm Beach County, where he was board chair for four years.