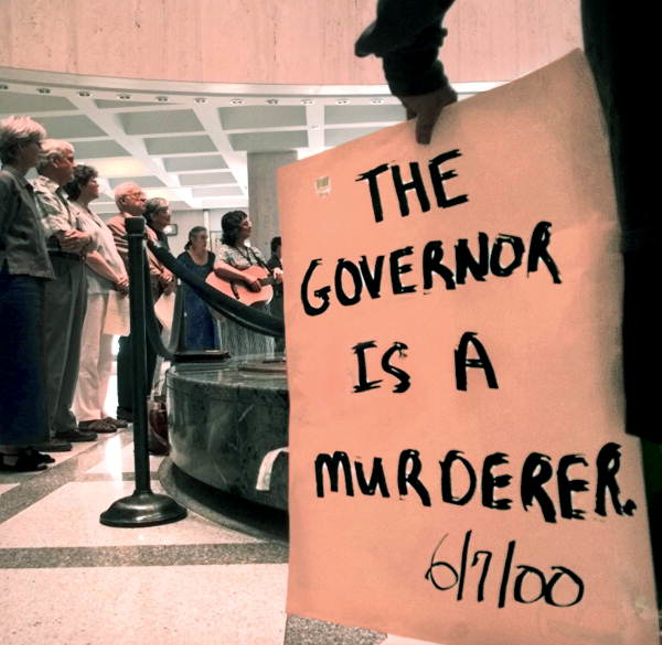 State Archives of Florida/Foley
Capital punishment brings protesters to the capital every year, including this Tallahassee gathering in 2000 to protest the execution of Bennie Demps.

Most death penalty supporters readily admit executions do not deter would-be murderers nor save taxpayer money from housing and feeding cold-blooded killers for a lifetime.

State executions feed a need for vengeance when someone cruelly takes the life of an innocent person. An eye for an eye. Tooth for tooth. Life for life. And, for some, that’s perfectly OK.

Because, honestly, would you forgive your daughter’s killer?

Andy and Kate Grosmaire did.

Even before Ann passed, Kate Grosmaire took the extraordinary step of meeting with McBride in jail, she writes in her book Forgiving My Daughter’s Killer. Over the ensuing months, the Grosmaires met with McBride, his family, a public defender and religious leaders to work toward reconciliation and a punishment. Ultimately, McBride received 20 years in prison with 10 years probation.

On Thursday night, Andy and Kate Grosmaire will join the Diocese of St. Petersburg, Equal Justice USA and Floridians for Alternatives to the Death Penalty to mark the International Day of “Cities for Life,” an event supporting the abolition of the death penalty and a stay of all executions worldwide. Allison Ferber Miller, a senior assistant public defender in Pinellas and Pasco counties, will speak along with the Grosmaires.

Cities for Life takes place every year on the last day of November, which is the anniversary of the first civil state, the Grand Duchy of Tuscany, to end capital punishment way back in 1786.

Organizers hope to show that, Governor Rick Scott notwithstanding, the anti-death penalty movement is not, er, dead.

In fact, death penalty abolitionists say, increased consciousness over racial disparities in the justice system and the increasing costs of court challenges has pushed the issue back into the spotlight.

Florida even has a chapter of Conservatives Concerned About the Death Penalty.

“The momentum is dramatically moving away from the use of the death penalty in Florida,” says Mark Elliott, executive director of Floridians for Alternatives to the Death Penalty.

Despite the rapid pace of executions in the state today, Elliott says those are a “barometer of where public opinion was when people were sentenced decades ago. Not today.

“Our job is make sure leadership is aware of that,” he says.

Although Gov. Scott ended up reassigning her capital murder cases to another prosecutor — a move the Florida Supreme Court upheld — Ayala’s stance may have emboldened other state attorneys to at least take a more reserved approach to the death penalty.

Hillsborough County state attorney Andrew Warren has expressed that he will only ask for the death penalty in the most heinous cases, and not against offenders with significant mental illness, according to emails obtained by the Tampa Bay Times last month.

The Florida Supreme Court decision mandating a unanimous jury in death penalty sentencing, which led the Florida Legislature to change the death penalty statute, is also having an effect on the practice.

More than a 100 death row inmates will be re-sentenced under the new statute and eight have already been re-sentenced to life, according to statistics compiled by the Death Penalty Information Center and a sociology professor at the University of Colorado.

Just before Thanksgiving, one lone juror held out and prevented the execution of Adam Matos, who was convicted of killing his ex-girlfriend, her new boyfriend and her parents.

Even the notorious South Florida face-biter looks like he’ll be spared.

And if juries don’t seek the death penalty for those who confess or murder multiple people, it stands to reason that defendants convicted under shaky evidence will also not be sent to death row. For years, Florida has led the nation in exonerated death-row inmates.

“The bottom line is there is no need for the death penalty or to execute people,” says Elliott, who has worked on this issue for the last 15 years. “We have life without parole. It does the same thing to protect society.

“And we don’t make mistakes by executing someone.”

International Day of Cities for Life