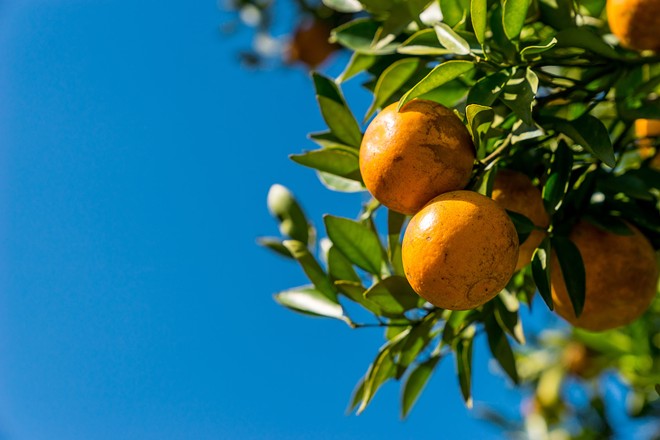 Photo via jumlongch/Adobe
As they prepare for the 2022-2023 season, Florida citrus growers are using 32,046 fewer acres than during the past season and about half of what was used two decades ago, according to a federal report.

With the industry coming off perhaps its least-productive season in eight decades, the U.S. Department of Agriculture reported Wednesday that 375,302 acres are being used for citrus production in Florida, down 8 percent from last year and 53 percent from what growers used in the 2001-2002 season.

“Of the 24 published counties included in the survey, 23 recorded decreases in acreage while one county —- Brevard —- showed an increase,” the report said of the year-to-year changes. “Hendry County lost the most acreage, down 6,640 acres from the previous season. DeSoto County records the most citrus acres at 64,641 acres.”

Along with development pressures from Florida’s growing population, the industry has struggled for years with a bacterial disease known as citrus greening. It also has faced increased labor costs, competition from foreign imports and damage from hurricanes, such as 2017’s Hurricane Irma, which tore through major citrus-producing areas.

The industry and the state have taken a variety of steps to try to deal with citrus greening, which is more formally known as huanglongbing, or HLB.

The federal report said orange groves, now at 343,659 acres, make up most of the state’s citrus land. Valencia is the dominant variety grown. The overall total of orange-producing land is down 8 percent from last year and down 47 percent from the 2001-2002 season.

During the 2021-2022 season, growers produced enough oranges to fill 40.95 million industry-standard 90-pound boxes and 3.3 million boxes with grapefruit, according to a season-ending report issued in July.

The U.S. Department of Agriculture is set to issue an initial forecast for the 2022-2023 growing season on Oct. 12.

The state budget that went into effect July 1 included $37 million for the industry, with the biggest chunks of money being $17 million for Department of Citrus marketing programs, $8 million for research programs, and $6.2 million for what is known as the Citrus Health Response Program, which includes cultivating new trees resistant to greening.

Meanwhile, one benefit of the COVID-19 pandemic was an increase in sales of orange juice as people sought healthier drink options.