Florida Dems argue protest bill is 'overkill,' and will 'quash voices of Black and brown people'

“We know, from lifetimes of experiences, who this will harm … communities of color, Black and brown Floridians." 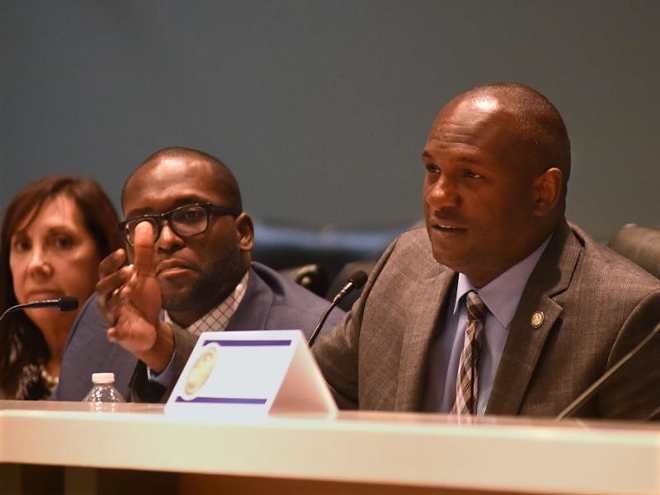 Saying it is designed to quash voices of Black and brown people, Florida Democratic lawmakers on Monday excoriated a proposal pushed by Republican Gov. Ron DeSantis and legislative leaders aimed at cracking down on violent protests.

“We know, from lifetimes of experiences, who this will harm … communities of color, Black and brown Floridians. This is calculated political opportunism,” House Minority Co-leader Bobby DuBose, D-Fort Lauderdale, said during a video conference with reporters.

DeSantis first floated a version of the legislation in September, after months of nationwide protests about police violence against Black people and racial inequities in other areas of society.

DeSantis and the GOP leaders said the legislation would protect Florida from similar mob revolts.

“It doesn’t matter what banner you are flying under. The violence is wrong. The rioting and the disorder is wrong. We are not going to tolerate it in Florida,” DeSantis said Thursday, adding that he hopes the proposal will get “even more support” following Wednesday’s uprising, which resulted in the deaths of at least five people.

Sprowls, a former prosecutor, said the plan will "protect Floridians" from the "nonsensical violence" that took place in Washington, D.C.

"And when these types of despicable acts happen, law enforcement and prosecutors will have the tools and the support they need to keep Floridians safe, communities whole and property undamaged,” he said in a prepared statement accompanying the release of the bills on Wednesday.

But Democratic lawmakers said linking the crackdown on protests with the assault on the Capitol was a ruse.

“This bill has been rebranded. The governor’s office is now saying it is in response to that. Now, this is just a blatant attempt to obfuscate their own responsibility for that violence that occurred,” Senate Minority Leader Gary Farmer, D-Lighthouse Point, said.

The revamped version of the proposal would create a new offense of “mob intimidation” when three or more people act “with a common intent, to compel or induce, or attempt to compel or induce, another person by force, or threat of force, to do any act or to assume or abandon a particular viewpoint.”

The identical bills would also enhance penalties for defacing public monuments, make it a crime to destroy memorials and require mandatory restitution for the full cost of repair or replacement of damaged or destroyed memorials.

And the measure would make a crime of “doxing,” the posting of private information about people on social media sites, when such data is published with the intent to “threaten, intimidate, harass, incite violence … or place a person in reasonable fear of death or great bodily harm.” Also, the proposal would make it more difficult for local government officials to trim spending on law enforcement.

“This bill is overkill, designed to squash free speech and peaceful assemblies, primarily by people of color. Should it become law, it threatens to tread on those same liberties for every other group that the governor and the government disagrees with, down the line,” Sen. Perry Thurston, D-Fort Lauderdale, said.

Democrats noted that, unlike in other areas of the country, rallies in Florida did not turn violent last summer, when protesters began gathering following the death of George Floyd. Floyd died after a Minnesota police officer knelt on his neck for nearly nine minutes.

The Florida proposal “would be absolutely deadly to our communities,” DuBose said.

“As a father, trying to raise four young Black men and boys in this state, this terrifies me,” he added.