'I found obstacles to securing the resources and a long-standing, systemic and deeply entrenched culture resistant to change.' 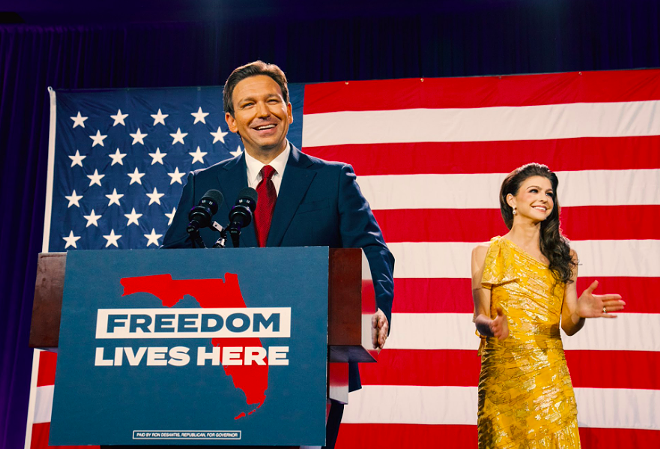 Photo via DeSantis/Twitter
The post-election campaign finance reports from the two major parties in Florida emphasize the gaping chasm between Republicans and Democrats in what was until recently the country’s most hotly contested swing state.

Fresh off posting a 19-point win in the Governor’s race and taking supermajorities in both chambers of the Legislature, the Republican Party of Florida raised $10.3 million from after the election through the end of the year, according to state campaign finance reports. That’s nearly 60 times what the Florida Democratic Party raised — $171,000 — in the same period.

The FDP haul is also far short of the $1.3 million it took in after the 2018 Midterm Election cycle.

Diaz, a former Miami Mayor, helped the party — which faced steep debts and failed to pay health care premiums for workers as Rizzo left — raise money. But he didn’t arrest the party’s slide among voters in Miami-Dade as DeSantis won the county. The FDP is expected to meet later this month to elect Diaz’ successor.

In a lengthy letter announcing his resignation, Diaz pointed to chronic issues that have plagued Democratic campaigns in Florida for decades: lack of engagement with voters, targeting voters only during elections and lack of resources.

“During my tenure I hoped to address these issues, and build a united party without silos, focused exclusively on our purpose — to elect Democrats,” Diaz stated.

“Instead, I found obstacles to securing the resources and a long-standing, systemic and deeply entrenched culture resistant to change; one where individual agendas are more important than team; where self-interest dominates and bureaucracies focus on self-preservation.”

Meanwhile, the RPOF used its largesse to help pay for Gov. Ron DeSantis’ inauguration. It also returned $8.5 million to DeSantis’ political committee. The money could be used for a 2024 presidential campaign. DeSantis is seen as a potential contender for the GOP nomination, despite Trump’s entry into the contest shortly after the Midterms, but he hasn’t said whether he’ll get into the race.