The border crisis is a manufactured one, Florida officials say. 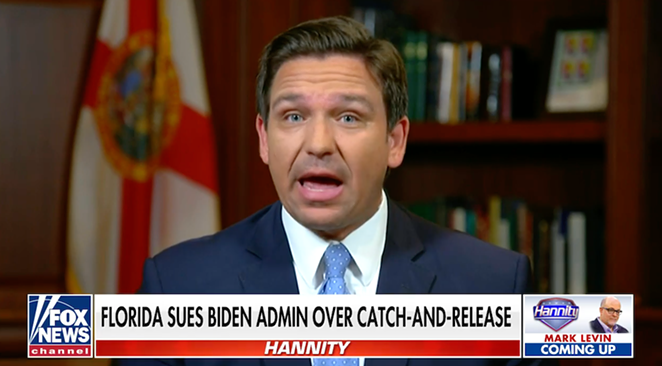 The state, in its lawsuit, demands the federal government cease and desist from the “catch and release” system of apprehending illegal border crossers, then giving them a court date and letting them go free. U.S. Customs and Border Protection has released 225,000 border crossers this calendar year.

Speaking on Sean Hannity‘s Fox News talk show, the Republican Governor hit the Biden administration for being soft on immigration.

“If they end catch and release and they reinstitute ‘Remain in Mexico’ and finish construction of the border wall, guess what, (the) crisis will be ended. People will stop even coming because they know they’re not going to be able to,” DeSantis said.

DeSantis’ executive order requests the Biden administration release more information on how many individuals crossing the border end up resettling in Florida, as well as demanding data such as individuals’ criminal status and whether they tested positive for COVID-19.

“Biden’s made it clear. If you just get here, we’ll put you on a bus; we’ll put you on the plane, we’ll send you all over the fruited plain,” DeSantis said. “We have Americans having a hell of a time getting out of Afghanistan, and yet, if you just come illegally, you basically get put on your way to communities all across the country.”

Both DeSantis and Moody, who called the border situation a “manufactured crisis,” noted that in former President Donald Trump’s last entire month of office, just 17 border crossers were released with a pending court date. In July, the Biden administration released 60,607.

However, this week, White House press secretary Jen Psaki pushed back on assertions the administration was not following the law.

“If they are placed in an alternative to detention, there’s also a process required — a legal document — a document they would have,” Psaki said on Monday. “As a part of that process, Border Patrol agents collect biometric and biographic information — fingerprints, photos, phone numbers, and an address in the United States — and also run a background check as a part of the process. And those who do not report, like anyone who’s in our country without legal status, are subject to removal by ICE.”

The Biden administration announced Wednesday it will seek to end “Remain in Mexico” in the coming weeks. That policy, started under Trump, displaced people to wait in Mexico for immigration hearings.

Immigration has been one of several recent flashpoints between Biden and DeSantis. After sending law enforcement officers to the border in July, DeSantis toured the border with Texas Republican Gov. Greg Abbott. The two blamed Biden’s “open border policies” for rising illegal immigration and crime.

DeSantis is frequently floated as a potential GOP front-runner for the next presidential election. That field possibly includes Abbott, who, like DeSantis, faces reelection in 2022. However, DeSantis has consistently downplayed 2024 speculation.