DeSantis also wants to expand a 2021 law that created new reporting requirements for entities seeking grants or contracts from the state. 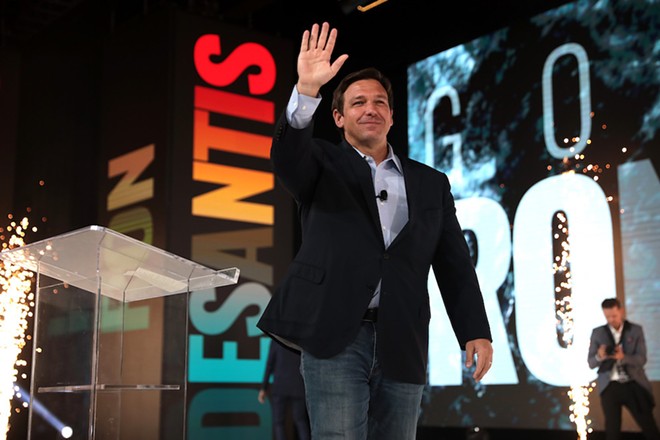 Gage Skidmore from Peoria, AZ, United States of America / CC BY-SA (https://creativecommons.org/licenses/by-sa/2.0)
Gov. Ron DeSantis on Thursday issued an executive order aimed at governments in China, Iran, Russia, Cuba and “others hostile to American interests,” as he pointed to concerns about issues such as cybersecurity.

DeSantis, who is running for re-election in November, said he also will ask lawmakers in 2023 to make changes in state law that would further block business activities in Florida by those governments.

“I think we've stood strong against this type of ideology in a variety of ways, and this just continues us on that course,” DeSantis said during an event at Miami Dade College’s Wolfson Campus that focused heavily on China.

The executive order, in part, bars the state and local governments from procuring or using technology services that any federal agency has prohibited based on national-security concerns.

The order also directs the state Department of Management Services to take steps to ensure commodities and services used by the state and local governments are not susceptible to exploitation by “foreign countries of concern.”

“This will prevent the exposure of Floridians’ personal information and technology systems in Florida to foreign entities and bad actors,” DeSantis said.

DeSantis said he wants lawmakers to prevent the targeted countries from being able to purchase agricultural land in Florida and land surrounding military bases. DeSantis’ office cited “instances of Chinese Communist Party-affiliated companies purchasing land near military bases in other states, including Grand Forks Air Force Base in North Dakota.”

DeSantis also wants to expand a 2021 law that created new reporting requirements for entities seeking grants or contracts from the state.

The law requires state agencies and universities to report receiving gifts or grants “from any foreign source” valued at $50,000 or more. DeSantis wants to revise the law to bar gifts to Florida colleges and universities from residents, governments or other entities in countries of concern.

Lawmakers also required people and entities seeking state grants or contracts of more than $100,000 to disclose contracts, donations or grants linking them to China, Russia, Iran, North Korea, Cuba, Venezuela and Syria. State universities and other entities with research budgets of $10 million or more were directed to create “international travel approval and monitoring” programs.